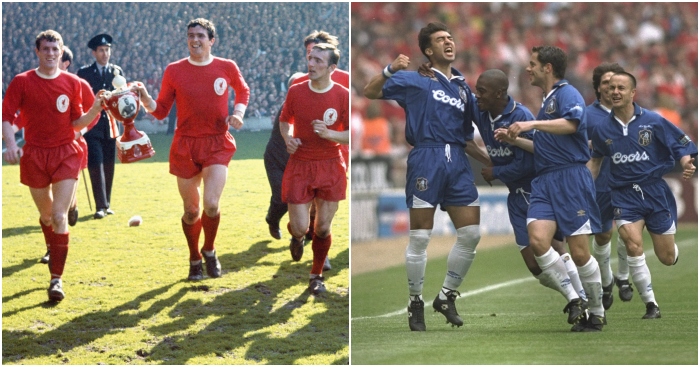 Spurs are on 14 years and counting but they have some way to go to match the worst trophy drought. Man City prove that when you pop, you just can’t stop.

MANCHESTER CITY – 34 years
Helpfully, City’s neighbours kept a public record of how long it had been since the Blues’ League Cup victory in 1976. But, as United and Hamburg know, every clock will eventually stop and Yaya Toure ensured the Stretford End’s stopwatch never ticked over to 35 years when his goal beat Stoke in the 2011 FA Cup final.

It was a barren few decades featuring five relegations between Dennis Tueart’s overheard kick to sink Newcastle in ’76 and Toure’s strike.

Their longest trophyless run since? One season.

CHELSEA – 26 years
Over a quarter of a century passed between Chelsea’s two-legged European Cup Winners’ Cup triumph over Real Madrid in 1971, and the FA Cup final in 1996, which was perhaps the reason Ruud Gullit’s Blues didn’t waste any time in brushing Middlesbrough aside at Wembley.

In the intervening period between Ron Harris and Denis Wise hoisting silverware, Chelsea won three pots in five years during the late 1980s, but no fan can be sustained on the Zenith Data Systems Cup and the Full Members’ Cup (actually the same thing, kids). But the Blues went from famine to feast, with the League Cup, another Cup Winners’ Cup, another FA Cup and the UEFA Super Cup coming before Jose Mourinho ended their 50-year title drought.

LIVERPOOL – 17 years
The Reds ended the first season after the Second World War as First Division champions, but that triumph was their last for over a decade and a half. They even spent eight seasons between 1954 and 1962 jobbing around in Division Two before returning to the top flight and winning the title again within two years under Bill Shankly.

Liverpool recently suffered their most barren run in the 55 years since. The Reds went five full seasons without a trophy before winning the Diet Treble in 2001, but defeat in the Champions League final in 2017/18 made it six full seasons that the club won nothing under Brendan Rodgers and Jurgen Klopp.

They ended that run with a small matter of a Champions League trophy and have since claimed a few trinkets.

ARSENAL – 17 years
Arsenal’s record-breaking seventh league title in 1953, secured on goal average ahead of Preston North End, was their last triumph until 1970. Unless you include five London Challenge Cup wins and a Southern Floodlit Challenge Cup victory in 1954. Which we aren’t. The Inter-Cities Fairs Cup, though, we are classing a proper trophy, with Bertie Mee’s Arsenal winning the predecessor to the UEFA Cup by overturning a 3-1 deficit in a two-legged final to beat Anderlecht 4-3 on aggregate.

Arsene Wenger oversaw the longest subsequent trophy drought – a nine-year stretch between FA Cups in 2005 and 2014. Despite the lack of silverware, Wenger was most proud of his work during that lean spell: “I would say personally, from 2006 to 2015 was certainly the period where I needed to be the strongest and did the best job. Because to accept to commit to five years when you build the stadium to work with restricted resources and keep the club in a position where we can pay our debts back, I personally feel I did my best job in that period. Not the most glamorous maybe, but the most difficult.”

TOTTENHAM – 14 years and counting
For all the progress being made at Spurs, the damning fact is that Mauricio Pochettino, Jose Mourinho, Ryan Mason, Nuno Espirito Santo and Antonio Conte have all conspired to win nothing at the club.

So Juande Ramos was presumably as smug as the smuggest of things after guiding Spurs to the League Cup in 2008, and Spurs fans certainly seemed to revel in beating Chelsea at Wembley. The club’s longest previous drought – a decade-long spell after winning the title in 1951 – was ended in stunning fashion when Bill Nicholson’s side became the first English team since the 19th century to do the Double. Nicholson must’ve been really full of himself…

MANCHESTER UNITED – nine years
Sir Matt Busby’s men in 1968 became the first English team to win the European Cup, but that was the beginning of the end of that glorious era for the Red Devils. Busby retired at the end of the following season, when United finished 11th in the First Division. Three eighth-placed finishes followed before they failed to heed their warning when coming 18th in 1972-73, a year before they were relegated upon finishing second from bottom.

Tommy Docherty brought United straight up as Division Two champions and after seven seasons without a final, he took them to Wembley in the FA Cup at the end of their first year back in the top flight. They lost to Southampton courtesy of Bobby Stokes’ late goal, but Docherty had his team – featuring the likes of Steve Coppell, Lou Macari, Gordon Hill and the Greenhoff brothers – back at Wembley a year later when, in 1977, they beat Liverpool 2-1 to win their fourth FA Cup and end a nine-year trophy drought, all the while denying Liverpool an unprecedented Treble.

The FA Cup also ended a subsequent six-year drought when Ron Atkinson’s side beat Brighton after a replay, while Sir Alex Ferguson badly needed the 1990 FA Cup to earn his first trophy and end a barren five years.

The current run? Another five years.