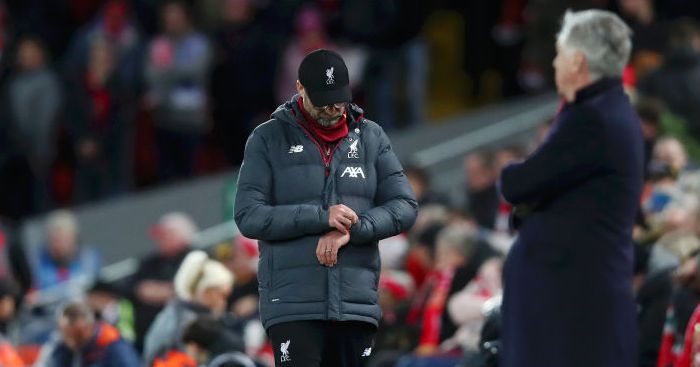 Ah yes, it is that time of year again. The time when commentators tell us that ‘they say the FA Cup had lost its magic but try telling that to the fans of ‘[insert name of lower league team whose club has just beaten a Premier League reserve side to the obvious relief of the Premier League manager]’.

The time of the year when we hear that that most modern apologia: “He’s put out a much-changed side.”

The arguments are well-rehearsed. We know fans of victorious lower-league sides will rightly take their pleasures when they can, but even they know their victory, while not nullified, is certainly tarnished by the lack of total commitment from the higher-placed club. Yes, still cheering – a win is a win – but not what such wins once were. Not usually.

Let’s not be overly nostalgic. The FA Cup wasn’t perfect at any point in its history. It was still football and as we know football has a habit of being pretty boring, then as now. But even so, it was competed for wholeheartedly, it excited us, it gave us pleasures no longer available. It was thought of as very important. It really did matter. And in that, it gave us much honest pleasure.

When the FA Cup really did matter massively to every single club in the land, no-one talked about if it mattered or not. Why would you? The fact we have done so now for a couple of decades shows that it doesn’t. That doesn’t mean it is devoid of all worth or merit to every single team – football is a resilient sport always capable of moments of joy and we saw a few of those this weekend – but let’s not pretend it’s something it’s not. Let’s see it for what it really is, not what it once was.

While we can look for less traditional enjoyments such as spotting good young players being given a run-out, the FA Cup simply isn’t the FA Cup that it still pretends to be. Oh sure, it wears the tattered and torn clothes of old and it trades on the traditions and history of the competition, but it is an impostor, or a zombie. That which so elevated and vaunted the cup, making it the most glamorous, the most desired silverware available, better even than winning the league, has gone.

It is particularly sickening to see old cup clips of Stanley Matthews, George Best, Ronnie Radford, Keith Houchen and Gazza, used to pretend there is a connection between then and now. It is feeding vampirically off the light from those distant dying suns, as though the competition that those players so aggrandised bears any relation to the cardboard and foil version of it in 2020.

You just can’t make priapic that which is clinically flaccid, but ideas are always proposed to make the cup significant again. A Champions League place, a bigger pot of money, all Premier League teams to be drawn away, dock points from clubs who don’t play seven or more first teamers. Don’t play the semi-finals at Wembley. Abolish replays. On and on it goes. But it’s all so much hot air blown into the slowly deflating dirigible that is the FA Cup blimp and none will ever be introduced, none will ever work.

And they will never be introduced and never work because of one thing: the Premier League.

The Premier League long since nicked an FA Cup artery, hung it upside down on a meat hook and is letting it bleed to a long, slow and lingering death. Like a Scandi noir serial killer, it is keeping its victim alive for long enough to know it is dying. The blame lies with them, even though they have fled the scene of the crime. Everything in the English football body has Premier League toxins in its bloodstream, compromising the health of the whole game.

The Premier League made football all about money first, and football itself a distant second. It has so heavily rewarded mere participation in its league that everything else looks like chump change. The £3.6 million you get even for winning the cup, and the prize money along the way, is dust in the wind for all but the poorest in this financial climate.

But this only-money-matters reality couldn’t be sustained without being underpinned by inculcating a culture in owners, clubs, managers, players, media and fans which glories in money, which believes in its holy, redemptive qualities and is utterly, hopelessly addicted to acquiring it. It turned clubs into cash junkies, jonesing for another score, while making others so crave their first taste of their sweet, sweet dope that they will do anything to chase this dragon.

And across its 27 years it has very successfully made itself the motherlode of money. It has so warped minds so that all must kneel in supplication to it, must worship it and all its attendant demons to survive within this kingdom of madness. A kingdom that passes itself off as driven by free-market economics but which is in reality a subsidised elitist cabal, more akin to the old Communist principle of everyone being equal but some being more equal than others.

Whereas football should be about competing and trying to win every competition you enter, thanks to the Premier League, competition is now the slave of money. If there’s not enough money, there’s not going to be any proper competing. That’s the black magic of the cup.

But this is where it’s got very weird. All that money is primarily used to pay grotesquely inflated wages in a never-ending spiral of snout-in-the-trough inflation, driven on by the guarantee of £100-£150 million for just being in the league and the deep pockets of billionaire owners. When only money matters and winning the cup will only garner enough to pay your top earner for three months, of course it’s going to be largely disregarded. When only money matters, any competition that doesn’t deliver much money is second-rate. When only money matters, football is just a means to an end.

This is the dark heart of dysfunction that is at the very epicentre of the Premier League’s takeover of the People’s Game by the moral turpitude of their economic model. The League Cup doesn’t matter; the FA Cup doesn’t matter. Almost no clubs will ever win the Premier League, so that doesn’t matter. Most will never play in Europe, (which is often painted as just more interference in the campaign to stay in the league), so that doesn’t matter. Sooner or later we have to ask what the hell is the point of this dreadful charade? It has made football less a competition and more an exhibition. Existing has replaced living.

With some third-round games well-attended, but many only a third or half full, it seems to be a question many are now asking. But it doesn’t have to be like this. How things are is not how they have to be. Cups can matter again. This is not mere nostalgia for a time gone, this is about creating a more fair, equitable, progressive future where money isn’t the be all and end all. A future where we play for the love of sport and competition first and foremost, not merely to acquire ever more money.

But for that we have to stop the Premier League ruining football. And for ideas on how to do that, you might want to read my book.

Johnny’s wonderful, thoughtful, funny and provocative best-selling book ‘Can We Have Our Football Back? How The Premier League Is Ruining Football And What We Can Do About It’ is published by Head Publishing – £10