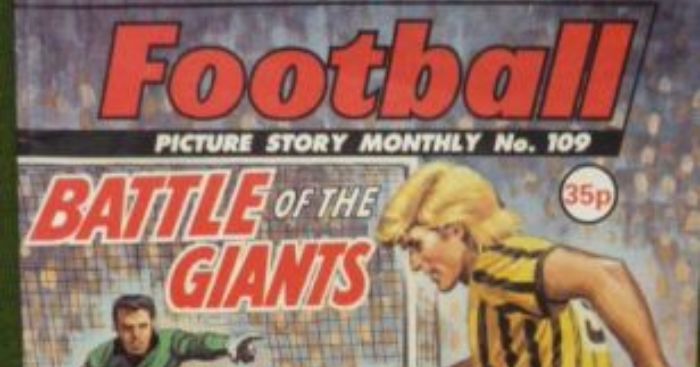 I don’t think about Football Picture Story Monthly often, but when I do I miss it. You must be careful pining after things which no longer exist, because it’s easy to disappear down a hole of imagined, nostalgic virtue. Particularly in England, particularly now. But still.

FPSM ran from 1986 to 2003, producing over 400 issues across nearly two decades. Each edition would have two separate stories, always drawn in black and white by a range of different artists, and tucked inside a colour cover.

In retrospect, they were very creative. Whenever football – or actually any sport – appears in fiction, it tends to exist within very narrow parameters. There’s always an underdog story, a triumph against the odds, or a loss of confidence cured by a restorative life event. The story arcs don’t often stray from those staples.

FPSM wasn’t immune from that, either. From memory, rarely were wholesome characters unrewarded and there weren’t many occasions when villains didn’t receive their comeuppance. But there was a detail and love to the tales which made them not quite affecting, but certainly compelling. It was imaginative.

There’s one which has always stayed with me: two Scottish boys play together in the same school team, one rises to the very top of the game, while the other flames out despite a very quick rise (and initial success at Kings Road United!). The very last slide of the story shows the latter, by then overweight and working in a pub, watching his former teammate on the television hanging above the bar.

It’s a good example of what made the stories work. They were parables, really, almost biblical in their balance of symbolism and simplicity. They softly preached messages which, to this day, most people would choose to believe. In the edition mentioned – called Road To The Top, perhaps? – the dividing line between the two boys is really drawn by their humility.

One of them burns brightly but briefly. Within a page of making his First Division debut, he becomes the most obnoxious player in the sport’s history – refusing to sign autographs for children, turning up late to training and, all the while, being enabled by a cackling, avaricious agent, drawn as the love child of Nasty Canasta and Eric Hall.

The other, of course, remains without an agent. He plays for his hard-up local team and, when another club makes an offer for him, volunteers to sign a new contract to force up the price. He prospers and spends the prime years of his career spraying passes around in Serie A.

The trite observation would be to say that FPSM described the football landscape as we might choose to imagine it. A more precise definition would be that it glossed over the inconvenient truths, or that it used the sport’s bad side to impart subliminal wisdom. One of its more familiar tropes, for instance, was the healing properties of a local community. An ageing, narcissistic player would be forced to drop down the divisions, would spend a couple of pages sulking, but would have a change of heart after an elderly neighbour baked him a loaf of bread.

It was always an industrial town. Always. It was somewhere presumed bleak by outsiders but which, on closer inspection, was full of heart and warmth. It wasn’t a particularly subtle device, but it didn’t need to be. The people writing those stories clearly loved the game the way it was and, as the ’80s became the ’90s and then the century ticked over, were eager to preserve what was being lost.

Perhaps the most magnetic quality was really FPSM’s optimism. It portrayed a world in which anything was possible. Discarded players would eventually be scouted and signed. Rusting clubs could be quickly renovated by a spring clean and some local fundraising. If not, a local businessman could always be relied upon to drive past, write a quick cheque, and have promotion in the bag by teatime.

In a very late issue, semi-professional player Jimmy Rogers is travelling to the West Indies for an end-of-season holiday. A representative from one of the local Football Associations is at the airport to meet a Jaime Rojas, a famous Mexican international and… well, you can guess the rest. One completely innocent misunderstanding later and Jimmy, not Jaime, is coaching the national team in the Copa America qualifiers.

The football was always captivating. Weirdly so, because it shouldn’t have been. It’s testament to the artists who worked on the series, of course, but those match sequences were always so engaging – the way the ball’s motion was captured, how it would ricochet off legs and crossbars and goalkeepers’ wrists, and how it all felt very fluid and real. Or the shadowy figures in the crowd who would murmur the commentary, drawn in that slightly ethereal way which gave them an actual sense of life.

Perhaps part of the charm was in just how ridiculous some of that was. To frame the slide, the illustrator would often have to embellish it with just a little too much detail, leaving someone saying something preposterous.

“Ooooh, off the bar! Would you credit it, that’s the sixth time this half?”

If there is a nostalgic element, it probably comes from knowing that something like FPSM would never be created again. Or, if it were, nobody would buy it. That’s a sign of the times, a measure of the cynicism, but also a reflection on how far apart the two worlds now are and how the wilful ignorance that the series once depended upon would, today, have to be extended to full-scale delusion.

A different time, then. And kind of wonderful.