Home Mailbox The campaign to save the sliding tackle starts here… 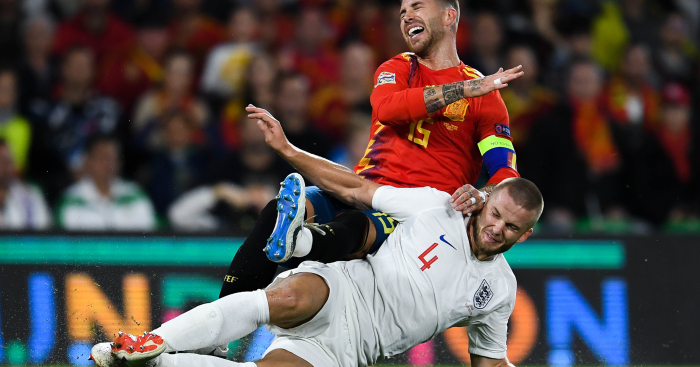 What’s Spanish for ‘root and branch’?
3-1 down banging hopeful balls into the box as the calm defence mop up the danger without breaking sweat. Same old stor…oh.

‘Mare Jordans
I know he was everybody’s relatable mate during the World Cup, but he’s a mile off good enough.

4 foot tall and three foot wide is no shape for an international goalkeeper.
Aaron, Croydon

…Howard, you are 100% correct, England certainly are better with Henderson on the pitch..wait, hang on..oh
TGWolf(Seriously, screw the england band)THFC

While I agree in small parts with Howard’s Henderson v Dier mail (I’d put them on par with each other for the record), he simply could not have timed his email better.
Not only does he praise Henderson after a rather average performance on Friday, but then Dier goes and has a rather good game against Spain.
All the while Henderson’s suspension goes completely unnoticed. George Carlin would be proud.
Big D, Luxembourg

Inject the Nations League into my veins
I just want to say, I really wasn’t convinced about this whole Nations League tournament but having just watched that England performance on a Monday (huh?) night against Spain, I am fully converted. This isn’t because England actually beat one of the big teams away from home who hadn’t lost there for 15 years, but because my heart was racing just watching it, a pulsating match that was full of passion and committed play from both sets of players.

If this was a normal international friendly fixture this game would have been ‘subbed’ to death by the 60th min. Seeing the best players staying on the pitch until the final whistle is what us fans want to see, it creates those last minute moments of magic and gives everyone in the ground a reason to stay around until the referee calls it.

From an England point of view I’m feeling pretty damn proud of this team at the moment and if players like Rashford and Sterling carry on at that sort of level, with the youngsters that are evidently waiting in the wings, we could have a team/squad of real limitless potential here.

I know some people will say “calm down it’s only one game” but if you’re like me and you’ve stuck by and watched England games religiously since you were a child, through some horrific tournaments/qualifiers/friendlies on our part, then you’ll appreciate that this COULD be a genuine great team, the likes of which we seem to come across every 20+ years. That’s not to say it will win anything but my god, this bunch of young lions might excite us along the way.
Chris Hardy (Southgate should ban the Cruyff turn on the edge of our own box though)

…Dier on Ramos. Just beautiful. I loved how he protested his innocence, even Ramos seemed to appreciate it.

…I could write about the joy of watching England ruthlessly humiliate Spain in the first half. I could write about how obvious it now is that Dier and Henderson should never play together again. I could also write about what could have been if England had played like this in the World Cup (e.g. no Ashley Young). What I am going to write about though, is the official demise of tackling. Winning the ball cleanly is no longer allowed if you show too much aggression. The tackles by Dier and Maguire were absolutely perfect, but were both ‘rewarded’ with a yellow card. Basically, this means that a player can be never be certain if a sliding tackle will be tolerated by the referee, as ‘too aggressive’ is extremely subjective. Consequently, this means that a player will hesitate to tackle because it’s too risky. I think we can guess where this is heading; the sliding tackle is going to be outlawed and one of the joys of the game of football will be taken away from us. Let the pro sliding tackle revolution start here!
G Thomas (2 games without the England band, I can die a happy man) Breda

…I’m calling it early but surely the next UEFA Nations League will introduce play offs between the four tiers? As used to happen in England pre-Premier League.

4 matches between 3 teams in the current format isn’t a sufficient sample size to justify promotion/relegation.

…Was a bit nonplussed by UEFA’s nations’ league when the idea was first mooted but 3 games in and I have to ask “what’s not to like?”

That game last night was better than any friendly I’ve ever sat through and the first match against Spain was pretty decent stuff too. The game against Croatia was just odd because of the total lack of atmosphere but I’ll bet the return match will be significantly better when the fans are allowed in.

Rarely do I think the football authorities make changes to the game for the better but I think, on this occasion, they may be on to something.

Regular competitive fixtures against top opposition is a much better idea than pointless friendlies played in front of sparse crowds with nothing on the line. You have to have skin in the game: see Eric Dier tackle on Ramos last night. You don’t get that sort of commitment in a friendly 😃

All the best
Jon Cardy

…Can’t believe how fickle football-supporting Britain is! Five minutes ago the Nations League was a dull waste of time, after England lost their 1st match and then had to play their 2nd behind closed doors. Now we’ve beaten a good team, it’s a great competition, and ‘breathing new life into international football’!

At least everyone has come to the right conclusion, finally. I mean would you rather watch a match like last night’s, or a 1-0 bore-win against Lithuania?
Steve, Sutton

Lukaku way off Juve level
After Lukaku somewhat stated he would be interested in moving to Serie A for Juventus (Probably just expressing his opinion, which of course is not a problem at all, after all Juventus are a much better team than United at the moment), it got be thinking he needs to improve a LOT if he thinks he is good enough to play for one of the best teams in the world at the moment, especially against the bigger teams in the league.

Juventus have gotten to the Champions League twice in the last 4 years, once in 2015 and once in 2017 and I reckon they may have well won the competition last year if they had beaten Madrid last year (Incredibly unfortunate to not least not get to extra time in that game).

I would just like to remind Lukaku that a semi-fit Louis Saha was just as good as him. Not only could Saha scored all kinds of goals, his touch was good, his technique was better and his heading was better. A fully fit Louis Saha is miles better than Lukaku at the moment, and if he is going to prove United fans wrong, a couple of goals against Juventus would not be a bad start at all.

Do not get me wrong, given his age he is one of the best strikers around. However, ever since he joined United, he has become a bit arrogant and is talking a lot in the press, needs to start showing it on the pitch more and knows he can get away with bad performances now and then since he has become one of Jose’s favourites since his arrival.
Rami, London

Actors > spectators
Every Saturday, I coach an under-14 girls’ team. We’re not that good, and we have no fans, but it is not a ‘vapid, soulless or pointless experience’. It is probably the most meaningful part of my week.

Whilst I’m sure England players found the game Rijeka odd, I’m also sure they were emotionally invested in its result. Johnny Nic seems to forget that players are fans of the Beautiful Game too – probably bigger ones than us given the sacrifices they’ve made to make it professionally.

That isn’t to say that fans can’t be both. Indeed they often are. But those that are mere spectators are the least important people in football, and deservedly so.
Jimmy, London

Keano’s f*cking magic
A new lad started in my office last week and, as always, football is the language used to try and get some rapport going (or at least used to determine whether you will ever speak to the kid again).

Anyway, the conversation was about the best midfielders of the 90’s. Specifically, holding midfielders and he was interested to know where I rated Royston Keane. I’m not a Man Yoo fan (thank f*ck) but I do rate Keane highly and said that in the latter part of the 90’s I’d not pick anyone else in that position. Him and Zidane in a traditional 442 would have been something. I’m not saying Keane is the right answer, there are many midfielders who were elite and could compete with Keane. I wonder if because he was so gritty and aggressive that it tarnishes what people think of his ability? The man was a monster.

I wanted to check the football gods agreed with me so Google’d ‘top midfielders’ and found him at number 4 in the all time list. Thank you football gods. My other couple of suggestions 90’s suggestions were also in there (Edgar Davids/Vieira/Dunga/Deschamps).

The Scottish play-er
I will be about the hundredth to say this, but “where dwell the nasally blue” is absolutely poetic. Take a bow, sir