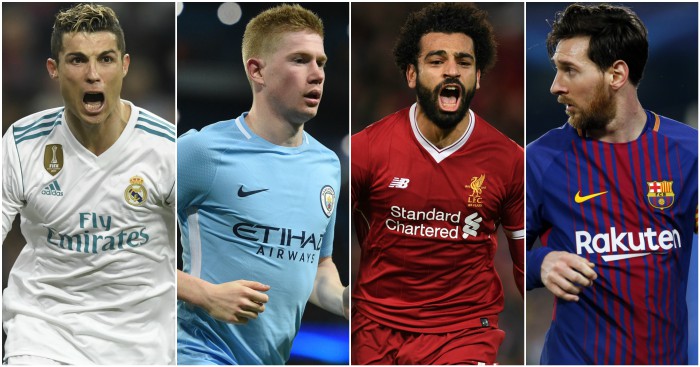 Manchester City
Why they’ll win it: Comfortably the best team in the Premier League and arguably the strongest in Europe. Now is the time for Pep Guardiola’s men to show it.

With the Premier League entirely likely to be wrapped up by the time the second leg of their quarter-final kicks off, City can focus solely on winning their first European Cup. As strong as the field may be, City could be fancied against any of the traditional Champions League big-hitters.

Why they won’t: The only thing they lack is experience. The squads of Barca, Real Madrid and Juventus are laden with serial winners, while City’s only previous Champions League winners are Claudio Bravo and Danilo.

There has to be a first time for everything, of course, but whether it be in the quarters or the semis, City will come up against the quality of opposition that they have rarely faced in the Premier League. And as the FA Cup defeat at Wigan proved, anyone can have an off-day.

As devastating as they can be in attack, a question mark remains over their defence.  Can they cope with the very best forward lines in Europe?

Barcelona
Why they’ll win it: The Catalans look more like their old selves this season, resuming their domestic ascendancy from Real Madrid by going the season unbeaten so far, while they also appear to be well aware that they have a point to prove in the Champions League.

They have gone beyond the quarter-finals only once in the last four years, having been beaten by Atletico twice and schooled by Juventus last year. Ernesto Valverde has restored some of their high-pressing principles, while at the back they look solid, having conceded only one goal in the group stages and another against Chelsea to make theirs the stingiest defence in the competition.

And of course there’s Lionel Messi. One hundred Champions League goals and counting.

Why they won’t: The biggest concern for Barcelona is not so much their own weaknesses but the strength of their rivals. The bookies make Barca second favourites for the competition, marginally behind Manchester City, while Real Madrid have little else left to play for this season other than the Champions League.

Injuries could strike any of their key men at any time, with Andres Iniesta and Sergio Busquets both being withdrawn against Chelsea, while Jordi Alba was also struggling towards the end. Are we clutching at straws?

Real Madrid
Why they’ll win it: Despite their struggles domestically, their pedigree in the Champions League is unrivalled among this group of quarter-finalists. This is a side that has won three of the last four competitions, and while Zinedine Zidane is under pressure due to their poor La Liga form – they sit third, a whopping 15 points off Barca – the coach knows the winning formula in the European Cup.

And this is all Zidane and Real have left to fight for. Their league title is gone and their Copa del Rey hopes went the same way too. A similar failure from the last eight onwards would almost certainly mean a new coach in the summer and some of the established players may have their noses put out of joint by an inevitable spending spree to compensate for failure. They are playing for their Real futures.

Zidane’s Real are not a complicated team, with the coach relying on the individual quality of his players rather than any clever tactical plan (though he did show glimpses of nous against PSG). That attacking talent has seen Real have the most shots and create the most chances of any team in the competition. You can never rule out any side with Cristiano Ronaldo – he has four more goals than anyone else – Karim Benzema and Gareth Bale, and having won eight out of their last nine, they appear to be gathering momentum.

Why they won’t: Real have looked suspect at the back all season, having conceded five more goals than Barca and Atletico combined.

Of the last eight in the Champions League, only Sevilla have conceded more, despite Real having faced the fourth fewest shots. They have committed no individual errors that have given the opposition an attempt on goal – the only team not to do so – which hints at a more structural problem with their rearguard.

And despite their attacking riches creating chances, they simply aren’t taking as many as some of their rivals. They have missed more big chances than anyone else, while Liverpool have scored six more goals from 25 fewer attempts.

Without an obvious tactical plan, how will Real fare when they come up against the attacking talent of the other favourites?

Bayern Munich:
Why they’ll win it:
Juup Heynckes’ last act before retiring in 2013 was to win the Treble. Now he’s back – he replaced Carlo Ancelotti in October with Bayern stalling – the Bavarians are back on a roll and Heynckes is eyeing a repeat of that glorious season.

In the five games bookended by the last-16 ties with Besiktas, Bayern scored 20 goals, with only a single draw denying them a run of 20 straight victories. They sit 20 points clear of Schalke at the Bundesliga summit, with only a DFB Pokal semi-final to draw any attention away from the Champions League.

Put simply, Heynckes has turned Bayern back into a streamlined winning machine and with Manuel Neuer returning to fitness, it will take one of the sides ahead of them in the betting to throw a spanner in the works over two legs.

Why they won’t: Again, only the strength of their leading rivals casts any doubt upon Bayern. And might they be undercooked for such a challenge?

The Bundesliga is in the bag, while they had arguably the easiest draw in the last 16 after a comfortable group stage. They failed their toughest test so far, losing 3-0 at PSG, but that was the final straw for Ancelotti’s reign and Heynckes’ re-appointment has since lifted the whole club.

Juventus
Why they’ll win it:
As Georgio Chiellini alluded after they dispatched Tottenham last week, the mentality of Juve always helps them find a way to win. Wojciech Szczesny concurred: “We’ve got players who have won the World Cup, they’ve won six championships in a row and you see that makes a difference in the difficult situations. Where others crumble we manage to get out on top.”

When you consider that Juve have made two of the last three finals, Gigi Buffon’s back-up makes a convincing case, even if they have fallen at the last hurdle against Barca and Real. And then there is Buffon himself. The Juve legend is likely to hang up his gloves this summer and if there are such things as football Gods, and they aren’t all mean-spirited b*stards, then it is only right that Buffon goes out on a high by lifting the only trophy he is yet to win.

The presence of Max Allegri certainly helps Buffon’s cause. It was his tweak that led to the ruthless end of Spurs’ dream, and his tactical nous coupled with his motivational powers has seen Juventus continue to grow and win, despite losing a series of top players over recent seasons.

Why they won’t: Allegri himself fancies Real Madrid, because as he is well aware following last season’s defeat in the final, “nobody else deals with games in this competition like they do”. He also pointed to Real’s lack of distractions, especially compared to Juve.

The Old Lady has been in a running battle with Napoli all season at the Serie A summit and, as Chiellini suggested, the champions are finally now putting their foot on the gas to shake off their highly rated Neapolitan rivals. Despite now holding a four-point advantage, Allegri’s side cannot let up if they want to seal their seventh consecutive scudetto. No one is asking him to choose, but the coach has already made clear that while the Champions League is ‘a dream’, the league remains their priority.

Liverpool
Why they’ll win it: They have the most potent attack in the competition, having scored six more goals than anyone else left in the competition. They have four players in this year’s top ten goalscorers, though one of those left in January. Philippe Coutinho may have gone but is there a defence in Europe that you would back to stop Salah, Firmino and Mane?

Jurgen Klopp has a good track record in this compeition with Borussia Dortmund, taking them to semi-finals and a final. His Liverpool side have shown they are a match for anyone on a one-off occasion – just ask favourites Man City – and with nothing else aside from securing a top-four place to worry about, Klopp can throw all his resources at winning a sixth European Cup for the Reds.

Why they won’t: It is a good job that Klopp has such a thrilling attack because his defence so often needs lifting out of holes they have dug for themselves.

Despite beating City this term, they have still shipped eight goals to the Premier League leaders, and what Ronaldo or Messi might do to the Liverpool rearguard doesn’t bear thinking about.

Despite Klopp’s Champions League experience, his squad are still very much wet behind the ears. Between their squad members, The Reds have the fewest appearances of anyone in the last eight, some 600 fewer than Real’s seasoned winners, and over 100 fewer than any of the four teams knocked out this week.

Sevilla
Why they’ll win it: Having created history by reaching their first European Cup quarter-final for the first time in 60 years, Sevilla will take great confidence into the last eight. Vincenzo Montella’s side are built around a solid spine, with Steven Nzonzi again putting himself in the shop window, while Wissam Ben Yedder is the competition’s second-highest scorer behind only Ronaldo.

Stranger things have happened, haven’t they?

Why they won’t: Despite their glorious win at Old Trafford, the context of United’s appalling approach and performance must be considered. Aside from at the back, Sevilla were not especially impressive for the first hour at Old Trafford, though they deserve credit for sensing United were there for the taking and killing them off.

That, though, was one of the few highlights during a season in which they currently sit in fifth place in La Liga, 11 points off the top four with a goal difference of minus six.

Roma
Why they’ll win it: Roma came through a group featuring Chelsea and Atletico Madrid as table toppers, and Alisson, the ‘Messi of goalkeeping’, has not conceded a Champions League goal at the Stadio Olimpico this term. Indeed, Roma have kept four clean sheets in the last six and appear to be hitting form at the right time after overcoming a wobble either side of the winter break.

Roma’s quality has rarely been disputed in recent years; it was their resolve that too often let them down. Eusebio Di Francesco appears to have instilled a confidence and a resilience that led him to claim that he is ‘totally convinced that this team is going places’. Kiev in May?

Why they won’t: Roma are more concerned with making sure they appear in the competition again next season. They lag behind the top two in Serie A with a deficit of 14 points from Napoli, and the priority for Di Francesco is to make sure they keep Inter and Lazio at arm’s length behind them.

Despite suggesting that he and former team-mate Montella had vowed to meet in a Sevilla v Roma final, any further progress for Di Francesco would be a bonus as they focus on sealing a top-four spot in Serie A. The coach admitted it took ‘almost the game of their lives’ to get this far for the first time in a decade.