Home F365 Features The Champions League last eight: The whys and why nots… 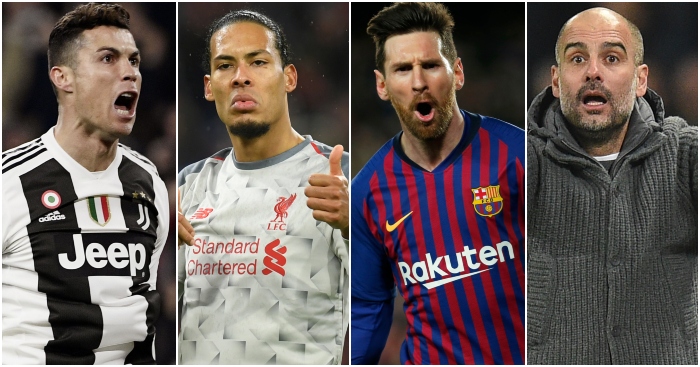 Manchester City
Why they’ll win it: Desire. Or rather, urgency. Of course everyone wants to win the Champions League, but the necessity for City to triumph in Europe is matched in the last eight by perhaps only Juventus.

City’s owners have made little secret of their European cravings and they will recognise that this season is a great opportunity to satisfy them, even if Guardiola has been trying to have us believe that his “teenagers” are not quite ready to mix it with the big boys. But with many of the more seasoned campaigners, like Real Madrid and Bayern Munich, no longer in their way, the time is now for City.

Guardiola’s Champions League drive is presumably as great as City’s owners – not that he would ever admit it. The Catalan hasn’t won the competition since 2011 and his failure to taste European glory with Bayern, especially in his final season in 2015-16 when his side were viewed as the best on the continent, is still held against him by his critics.

In addition to having the motivation, means and opportunity, Manchester City are also very good at the football. They have scored the most goals in Europe this season while winning 17 of their last 19 matches and are gaining the type of momentum managers dream of at this point of the season.

Why they won’t win it: Sometimes you can want something too much and, as Pep has pointed out, City as a club and as a group of players, cannot capitalise on an established pedigree in this competition.

City are chugging along nicely at the moment but Guardiola knows all too well that failure in the Champions League can come quick and when you least expect it. All but one of his exits since winning the competition in 2011 have seen his Barca, Bayern and City sides suffer sudden, fleeting but costly collapses. Conceding three goals in 19 minutes to Liverpool in the most recent of those episodes will have heightened Guardiola’s anxiety.

Burnout is always a concern when chasing glory on multiple fronts and, yes, City will play more games than their competitors in their pursuit of an unprecedented Quadruple. Fatigue must be a worry if it is playing a major role in the kind of injuries City are picking up, with Kevin de Bruyne, Fernandinho and John Stones having all been crocked recently.

Liverpool
Why they will win it: It may not be their priority this season, but the Reds have no intention of following Gary Neville’s advice to chuck all their eggs in the Premier League’s basket. Why should they when Jurgen Klopp’s side know how to thrive in Europe?

They reached the final last year – though their obvious defensive and goalkeeping deficiencies eventually cost them. Klopp has rectified that weakness to the extent that their rearguard is now their greatest strength. With Virgil van Dijk marshalling the defence, anything is possible.

Liverpool’s front three might not be as rampant as last season but, as Klopp said on Wednesday night after stifling Bayern Munich: “It is not about playing free flowing football because that is not possible against a side of this quality, you have to find different ways and we found them.”

The Reds have learned to vary their style, adding a robustness to the flair that took them to Kiev last term. And, in stark contrast to City, Liverpool don’t have to worry about the Champions League. The Premier League title might dominate their thoughts but the Reds can relax in Europe knowing their pedigree, experience and confidence means Europe will almost take care of itself.

Why they won’t: Ah, the Premier League. Domestic dominance is still what Liverpool fans crave after 29 years of submission to all their major rivals, plus Blackburn and Leicester. Not that anyone is making them, but if they had to choose, then it would be the Premier League title which takes precedence.

In solidifying his defence, Klopp has also sacrificed some of the attacking potency that carried them to last year’s final. His midfield is one a defence would love to play behind, but perhaps not one his attackers relish playing ahead of.

Liverpool’s lack of midfield creativity has been identified as one of the factors which could hamper their Premier League title bid and in Europe it is no different.

Manchester United
Why they’ll win it: Ole’s at the wheel etc. etc…

It is easy to scoff at the momentum United have managed to muster since Ole Gunnar Solskjaer lifted the gloom at Old Trafford, but the best team in Europe is not necessarily the one that wins the Champions League. By his doubters, Solskjaer has been described as ‘United’s Roberto Di Matteo’ – the bloke who guided an average Chelsea side to their first ever European Cup.

United have already created history and the belief garnered by beating PSG on their own patch with a severely weakened side should not be underestimated. Nor should Solskjaer’s front six, or whichever attackers don’t make his starting XI. Their forward line can cause problems for any defence left in the competition, while at the other end, Solskjaer’s best victories has United boss have been based upon soaking up pressure.

Why they won’t: Their luck has to run out sometime, one would think. Perhaps it already has…

Tottenham
Why they’ll win it: Spurs are flying somewhat under the radar in Europe, and Mauricio Pochettino can use the element of surprise to his side’s advantage.

Tottenham are nothing if not adaptable and Pochettino has a well-rehearsed tactical plan for all eventualities. They came through a group featuring Barcelona and Inter Milan, sealing progress with a draw at the Nou Camp, while Borussia Dortmund were swept aside with impressive ease in the last 16. This squad has some European experience but are in the process of developing that even further.

Why they won’t: They’re knackered, and they have no experience of winning in this or any other competition.

Pochettino has done a wonderful job in squeezing so much from limited resources and by keeping exactly the same pace as last season, despite failing/refusing to reinforce in his squad last summer or during the winter. But winning Europe’s most coveted competition under such circumstances seems an order too tall even for him.

Spurs’ tactical flexibility has been highlighted as a great strength but it could also be a weakness. It is fortunate that Pochettino has the means to change because too often he has had to.

Juventus
Why they’ll win it: Like City, Juve are desperate to win the Champions League and end 23 years of hurt and the draw is opening up for them too. Unlike City, they have experience of going to finals and, crucially, there is little domestically to distract them from their primary objective.

And now we are getting to the business end of the competition, the Champions League’s highest-ever goalscorer is just getting going.

Why they won’t: The burden of European expectation has weighed too heavily on the majority of these Juve players before. Ronaldo could make a huge difference, but even with the ridiculous superstar, his team-mates – and manager – have some haunting League memories to suppress.

Max Allegri admits winning the Champions League has “become an obsession”. But if Ronaldo can help carry that burden, then Juventus have a great opportunity of ending their drought. If not, well…

Barcelona
Why they’ll win it: Juventus have Ronaldo, but Lionel Messi is seemingly determined to prove that he too remains the super power he always was in the Champions League. No wonder Barca are the bookies’ favourites with Messi in this mood.

Around him, Barca have changed but they have also evolved. Ernesto Valverde has received criticism for his side’s failure to match the thrilling adventurousness of the sides of the past but the current team has a resoluteness about it, while the 5-1 victory over Lyon – a side which stayed unbeaten against Manchester City in the group stage – suggested they can turn it on when they need to.

If anyone is to stop Barca, they will probably have to do it on their own patch. The Catalans are currently 30 matches unbeaten at the Nou Camp in the Champions League, having won 27 of them.

Why they won’t: Since winning the competition in 2015, Barca have failed to get beyond the quarter-finals. Last season’s surrender to Roma indicates that despite Messi’s brilliance, Barca are still fallible.

That said, their defence has improved hugely as the season has progressed. Their status as favourites highlights how few chinks there are in Barca’s armour. But they do exist.

Ajax
Why they’ll win it: Their demolition of Real Madrid at the Bernabeu has made everyone wary of facing Ajax. Erik ten Hag’s young side were magnificent in overturning a deficit against the holders. But…

Why they won’t: Ajax have already played their final in Madrid. It was a triumph first to qualify for the group stages, then to progress to the knockout rounds. Everything is a bonus now, and it will be impossible for them to reproduce their Bernabeu performance five more times. Especially now every other side has been served notice of what Ajax could do to anyone not willing to take them seriously, and none of the seven teams left are as big a shambles as Real were then.

Porto
Why they’ll win it: They won’t. But if you feel like Sergio Conceicao’s side really can summon the spirit of 2004, go ahead and lump on the 50/1 outsiders.

Why they won’t: Aside from the obvious fact that Porto are the weakest of the eight sides left, they have more important matters to attend to. They are currently fighting a battle on the home front and beating Benfica, with whom they are level at the top of the Portuguese league, remains the priority.