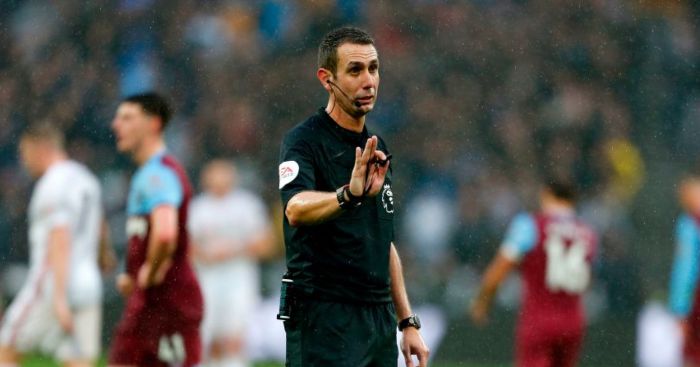 Last Saturday, we were in the 58th minute at the London Stadium, where West Ham led Sheffield United 1-0 in a tight match. George Baldock and Declan Rice both went for a loose ball, and Rice got there first. Baldock, sliding in late, clattered into Rice’s boot, and Rice went down. A clear yellow card, and David Coote, in a good position to see the play, was reaching for his pocket well before the camera went to the customary close-up on the participants.

Then came the most extraordinary moment of the weekend – in fact, of the entire season so far. Rice, unhurt, popped up and briefly embraced Baldock, as if to say, “it’s OK,” and then, amazingly, held out his arm and shook his head to tell Coote not to book his opponent. Baldock was also holding out his arm and shaking his head, but not even bothering to look at the ref, because he knew what was coming. Off camera, Coote took the card from his pocket, and there was genuine disappointment in Rice’s face. Rice turned to Baldock as if to say ‘I tried, but what can you do?’ He really didn’t want Baldock to be booked.

Well. At this point I’m supposed to say things were better in my day, decry the decline of sportsmanship, mention Corinthians (maybe even First or Second Corinthians), and generally fulminate about the ills of the modern game. But you’ve heard it all before, and it’s not very interesting anyway.

More interesting is what Rice’s state of mind might have been when he made the gesture. It’s extremely rare, but not unknown, for players to tell the ref they haven’t been fouled, and thus don’t deserve a penalty. Robbie Fowler is the famous English example, and a little googling will turn up the name of Beknaz Almazbekov, a youth player for Galatasaray.

But Rice’s case is different. Fowler and Almazbekov had personal knowledge the referee had made a clear mistake. But if there’s contact, a yellow card is a pure judgement call – the ref is the only one who can decide whether it warrants a booking. Rice, by trying to forestall the card, was substituting his judgement for that of Coote.

The logical inference is that Rice knew he hadn’t been seriously hurt, and so felt it wasn’t right to give Baldock a yellow. But in that case, he wasn’t merely substituting his judgement, but applying a different criterion of judgement altogether. ‘Causing serious hurt’ isn’t the standard in the law. Being ‘reckless’ is. In pursuit of what he saw as fairness, Rice was making his own rules.

Now that’s interesting. It reminds me of our matches in P.E. classes, where the player who thought he was fouled got to make the call. In that setting, you couldn’t really call a foul arbitrarily, because the other side would soon do the same. When you’re among friends, or at least only occasional enemies, that system works. In professional football, not so. Hence the Laws of the Game, and men with whistles.

And speaking of the refs, what was Coote thinking when Rice held out his arm? We can only guess, because the camera didn’t give us the whole story. By the time the view moved back from Rice and Baldock to Coote, he had the yellow card out. Notably, his first gesture wasn’t toward Baldock, but toward the West Ham side, almost certainly in the direction of the off-camera Rice. He held out his hand with an extended index finger and said something; it looked as if he was telling Rice he’d be back in a moment to discuss matters. He walked over to Baldock, brandished the card, then turned back to face the West Ham side – at which point the camera went to the replay, and we never saw if Coote spoke with Rice. No match report that I could find had anything to say about the incident.

Nor, strangely enough, does it show up anywhere on the internet as part of a highlight package. Match Of The Day didn’t mention it, either. I was only able to review the video because I pay for the full package of Premier League matches. Perhaps it’s come to the point where we don’t believe such things can happen.

Rice certainly showed admirable sportsmanship, but the ref got the call right and, if I’m reading the video correctly, at least considered telling Rice who was in charge. If he did it respectfully, that’s admirable too. In a world of unicorns, fairies and Corinthians, we can let players call the shots, and good for them. In the world of FIFA, Nike and rugby tackles on Wilfried Zaha, I’m glad we have the men in black. So three cheers for Rice – but three cheers for Coote as well. And six cheers that the play couldn’t go to VAR.