Home Competitions Euro 2016 The eight candidates for England; we draw a Blanc 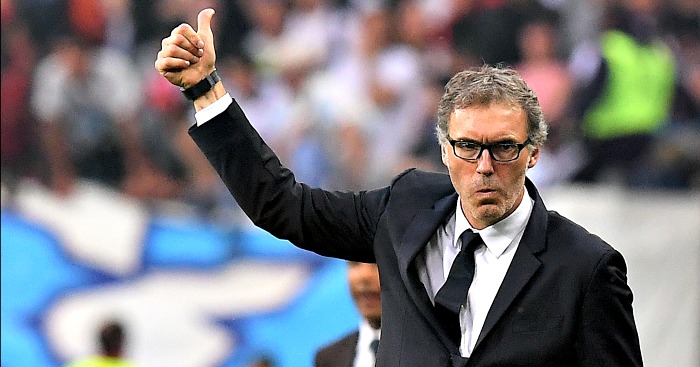 Below are the eight leading candidates to be appointed as Roy Hodgson’s successor as manager of England. Read on in horror as we examine the pros and cons of each individual.

“He (Southgate) fits their remit, he has been with the Under-21s, he has been around the squad so I would back Gareth Southgate if he was to go in there” – Alan Shearer.

“This discussion about whether Gareth Southgate should be the next England manager is even more depressing than the match” – Owen Gibson.

The pros
He’s English! He is the current manager of the Under-21s. Arsene Wenger said he was “good enough” to manage England (in 2007).

The cons
Relegated Middlesbrough. Missed a crucial penalty that one time. Is the second coming of Roy Hodgson. If you want proof of that, examine England’s qualification campaign and subsequent performance at the Under-21 European Championships in 2015. Southgate led them to nine wins and one draw in qualifying as England finished top of their group. They then exited at the group stage after two losses and one draw. His would be a seamless appointment. Oh, and also:

* Inspirational. Southgate’s installation as favourite to replace Hodgson is predictable, but alarming. The FA, keen to appoint another English manager, are likely to simply inspect the current national team set-up, and find the current manager of the Under-21s. Aside from three unsuccessful years at Middlesbrough, Southgate has spent his managerial career in charge of England’s youth. England’s horribly under-performing youth, that is.

“Glenn was brilliant as a coach for England in my opinion, he has got so much to offer and is still young enough so I would totally back Gareth [Southgate] and Glenn” – Shearer.

“I think we have got the perfect man, Glenn fits the bill for me. He said something, but that was a long time ago. He deserves another chance” – Harry Redknapp.

“For me, personally, I’d bring back Glenn Hoddle. I worked with Glenn in ’98; we played some of our best football. I think he knows what it takes to get this team going. His vision of football is second to none” – Paul Ince.

The pros
He’s English! Has actually led the national team out of the group stages of a major international tournament. Has experience managing leading clubs in Chelsea and Tottenham. Has displayed an unrivalled level of analysis as a co-commentator.

The cons
Hasn’t actually managed since 2006. Has already had his chance with England, ending in an unceremonious sacking. Believes people born with disabilities are being punished for their sins in a previous life. Is not actually good enough.

* In what other country would a former manager who has been out of work for a decade, who has somehow worsened his reputation during his years in punditry, be seen as the second favourite to be appointed as national team boss? No, no, no and a further no.

“One of the most experienced English bosses out there, the FA could be tempted to turn to Alan Pardew” – James Whaling, Daily Mirror.

“I’d happily have Pardew as England manager. He deals in streaks and he’d put an angry rocket up those players asses” – George Bingham. (Sorry for the rather unpleasant imagery).

“If it turned up on my doorstep I’d say to the FA: ‘Let me have one tournament – win, lose or bust – then my money ends when that ends.’ I’d be quite happy with that. That’s how it should be because you’re not building anything” – Alan Pardew.

The pros
He’s English! Finished in the highest position of any English manager in the league system this past season (15th). Is an excellent manager when in the midst of a run of positive form.

The cons
Is a terrible manager when in the midst of a poor run of form. Has won one cup as a boss – the 2010 Football League trophy. Once addressed a man eight years his senior as a “f***ing old c***”. Once headbutted a player. Is not actually good enough. Can’t dance.

When you get the call to be the next England manager https://t.co/olk9qtQAI2

* The confidence and self-belief is undoubtedly there, but Pardew is unable to back it up with much substance. He simply is not good enough.

‘One of the brightest managerial prospects in English football, his work at Bournemouth has been little short of exceptional’ – Daily Telegraph.

The pros
He’s English! And the most promising homegrown manager the country has produced lately. Has impressed at Bournemouth and, at 38, is still young.

The cons
Seven of his eight years in management have been spent at Bournemouth. The other was at Burnley, where he won as many games as he lost (34 each). Lacks the requisite experience and, at 38, is unlikely to leave a comfortable but challenging Premier League post for the poisoned chalice of the national team.

* In an ideal world, Howe would be the perfect candidate: A young, talented manager who can relate to the players and achieve a blend of tactical nous and man-management. The 38-year-old is intelligent, but has also proven himself adept at motivating players. But the Bournemouth boss would understandably have no inclination at this stage of his career to even contemplate taking the job. And as promising as he is, he has still has plenty of learning to do.

“You can count me out – I’ve made it clear how I’d have liked the job in the past, but they aren’t going to consider me now” – Harry Redknapp.

The pros
He’s English! He won the FA Cup that time. He has over 30 years of managerial experience. He won half of his games in charge of Jordan.

The cons
He can’t work a computer. He doesn’t know what an email is. He has never sent a fax. He has never sent a text message. He writes like a two-year-old. He can’t spell. The password he uses for everything is almost certainly a combination of his dog’s name and his wife’s birth year. He simply is not good enough.

* Appointing Redknapp as manager ahead of Hodgson in 2012 would have been a bad idea. Four years, one relegation and two dodgy knees later, and a bad idea has become a terrible one. At this stage, advisory roles are the 69-year-old’s limit. That is a fate he will be more than content with.

‘A very safe pair of hands, having succeeded at pretty much every club he has managed. Players love playing for him’ – Daily Telegraph.

‘Might not be fashionable but should England give it to Sam Allardyce. Proven PL boss. People talk about style. Was last night attractive?’ – Simon Stone, BBC.

“They say they are looking for an English manager but will they do it? You’ve got this ‘what’s sexier?’ element now, rather than how good you are at doing the job” – Sam Allardyce.

The pro
He’s English! He won the coveted 1998 Third Division and esteemed 1992 League of Ireland First Division. He has ensured a monopoly on managers regarded as ‘safe hands’ after his time with Bolton, Newcastle, Blackburn, West Ham and Sunderland. He has vast experience – but not in charge of top clubs.

The cons
His time has passed. The 61-year-old was a prime candidate in 2008, but being snubbed for Steve McClaren must hurt. There are no transfer windows in international football, and his style of football is unlikely to appease the watching public. He would also call up Kevin Nolan.

* Included on the list of candidates solely because he fits the remit of a) being English, and b) managing in the Premier League, there is little chance of Allardyce surrendering a comfortable top-flight job in order to risk his reputation to become manager of England. His style could get results, but there is no guarantee. Without a 40-point mark to battle towards, would his methods be quite as effective?

‘Rio may be too young but in some years learning from the next one. Shearer would be perfect but will not do it..’ – Peter Schmeichel.

“I would speak to the FA now, definitely. I’d offer my experience, tournament experience. Even if Southgate gets it” – Alan Shearer.

The pros
He’s English! He has a storied history with the national team as a player. He has actually improved as a pundit, to the point where he offers genuine analysis. He can also be described with buzzwords such as ‘passion’, ‘determination’, ‘experience’ and ‘common sense’.

* Shearer was a wonderful striker and his standing in the media has improved, but he is not qualified for such a massive job. ‘Passion’ and experience as a player will only get you so far. It is that simple.

‘Surely the next England manager cannot be a man who was sacked after four months and is partially at fault for England’s worst defeat in their history’ – Jack de Menezes, The Independent.

“He should be culpable, he has never coached proper players and it would just be jobs for the boys if he was to be appointed” – Harry Redknapp.

The pros
He’s English! Has proven himself an intelligent, incisive and tactically diverse individual when placed in front of a desk next to Jamie Carragher, provided he is given ample time for research. He ticks the boxes marked ‘passion’ and ‘former player’. At 41, he is still young, and has already been involved in the national team set-up.

The cons
For four of the five years since his retirement from playing, Neville has been involved with coaching in two roles: England assistant manager, and Valencia head coach. He is at least partially culpable for England winning only three of their 11 games at Euro 2012, the 2014 World Cup and Euro 2016, and was sacked after four months in La Liga. A winner of 20 trophies during his playing career, the former Manchester United right-back could not help organise a defence against a basic long throw.

* In terms of a man’s stock falling so dramatically, few can rival Neville. Twelve months ago, he was regarded as the future of English coaching, and a candidate not only to become England manager, but to take over at Manchester United. It is difficult to envisage him resurrecting his coaching career any time soon.

From Southgate to Neville, each of the eight leading candidates to become England manager have a number of things in common: They are all English, they are all passionate, and they are not good enough. So, who else should the FA look at?

LAURENT BLANC (33/1)
In the surreal surroundings of England’s latest embarrassing setback, an elite manager with international experience both as a player and in coaching became available. After three years at Paris Saint-Germain, Laurent Blanc left his post as manager.

With certain leading bookmakers, the 50-year-old is regarded as a longer shot than David Moyes (25/1), Manuel Pellegrini (25/1) and Brendan Rodgers (20/1) to become next England manager. The 50-year-old may not fit the demand of being homegrown, but he represents an interesting alternative, and one which should be investigated.

The only ‘negative’ with appointing Blanc is the fact that he is not English. Is the FA so narrow-minded as to rule out a man based on the fact he was born in Alès, not Croydon? Probably. But Blanc is a talented, proven tactician with more than one club, he ended his only other international job by his own accord after losing to a dominant champion, he is neither too young nor too old at 50, and he is available. More importantly, he is not Gareth Southgate. Or Glenn Hoddle. Or Alan Pardew. Or…