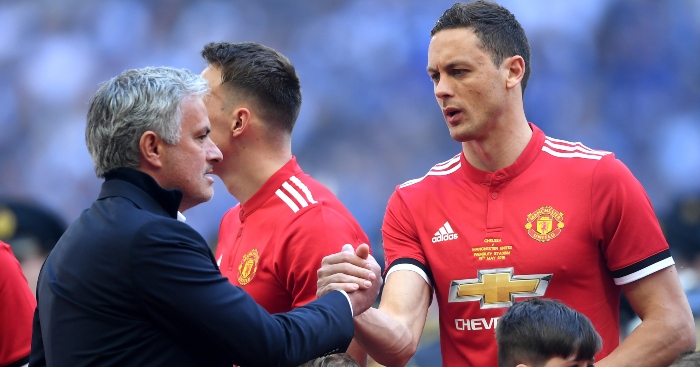 With whispers that Jose Mourinho could buy Nemanja Matic for the third time, we look at who the Portuguese counts among his most loyal.

Paulo Ferreira (Porto and Chelsea)
Maciel, Maniche, Mancini, Angel Di Maria, Andre Schurrle and Eric Bailly. The first signing Jose Mourinho made at each of his seven clubs is an eclectic selection of has-beens, could-bes, still-ares and never-weres, and Paulo Ferreira fits snugly in the middle. A right-winger when his countryman signed him for Porto from Vitória Setúbal in 2002, he was converted into two things: a right-back, and a disciple of the church of Mourinho. He missed just two league games in two seasons in Portugal, was sidelined for just one game in their run to UEFA Cup glory in 2003, and featured for every minute of their Champions League success a year later.

When Mourinho jumped ship for Stamford Bridge in summer 2004, Ferreira was not far behind. The Portugal international was initially a regular starter in London, but found opportunities limited after Mourinho’s sacking in 2007. He outstayed his master by six years, remaining with the club until his retirement in 2013 – the same summer Mourinho finally returned.

VERDICT: The Manchester United manager once described Ferreira as a player “who will never be man of the match but will always score 7/10 for his individual display”. He won 12 trophies under Mourinho. That’s a success, folks.

Maniche (Porto and Chelsea)
The oft-overlooked member of the family when compared with his long-lost BBC football presenting brother, Maniche – in the words of Mourinho himself – was “not an ordinary player”. The midfielder was a staple of the Porto side which exacted its dominance on Europe over those two memorable years in the mid 2000s. But unlike the aforementioned Ferreira and a number of his other compatriots, Maniche initially resisted the temptation of the Premier League. He stayed in Porto for one more year, eventually leaving for Dynamo Moscow in 2005.

Mourinho came to his rescue during a disastrous spell in Russia, signing the Portuguese on loan for half a season in January 2006 as cover for Michael Essien, who had left for Africa Cup of Nations duty. “He is a European champion, he is a UEFA Cup champion, he is an international. He is a winner,” stated the manager at Maniche’s unveiling.

The legend of Maniche lives on as a whisper carried through the corridors at Stamford Bridge. He played 11 games, missed a sitter on his first Premier League start, and was sent off in the 16th minute of the same game. “He certainly contributed to the team while he was here,” said chief executive Peter Kenyon, before stressing that the deal would not be made permanent.

VERDICT: This one was a favour for a struggling former player who had previously performed so well for him, so we’ll let Mourinho off. But it was certainly no success.

Ricardo Carvalho (Chelsea and Real Madrid)
Eleven players have played under Jose Mourinho at two clubs; two players have done so at three. As well as Porto and Chelsea, the early years of Maniche’s playing career coincided with Mourinho’s first steps into coaching at Benfica in 2000. Ricardo Carvalho can boast a slightly more illustrious hat-trick, having joined the manager at Real Madrid in 2010.

John Terry is the only player to ever feature more often under Mourinho than Carvalho, such was his faithful servitude to the 55-year-old. Mourinho even tried and failed to sign the centre-half for Inter Milan a year before reuniting with him at Real Madrid, noting that Alex was ahead of him in the central defensive pecking order, “so maybe it is better to let him come here and play”.

VERDICT: Carvalho won six trophies under Mourinho at Porto, five by his side at Chelsea, and two more as his lieutenant at Real Madrid. Oh, and he was the best defender in Premier League history. He was a hit.

Michael Essien (Chelsea and Real Madrid)
‘Jose Mourinho is my ‘daddy’, says returning Chelsea midfielder Michael Essien,’ read the unsettling headline to a story on the Independent website from July 2013. In the context of modern-day parlance, it is something of a disturbing term to use, but it conveys the depth of the pair’s relationship perfectly.

Mourinho spent a club-record £24.4m to bring Essien to Chelsea from Lyon in summer 2005. His dynamism, energy, power and skill had almost wholly abandoned him by the time a season-long loan move to Real Madrid came to fruition in 2012. He was signed as little more than a trusted and loyal soldier in a warring Los Blancos dressing room, and had little impact on the pitch.

The enduring memory of their time together in Spain would come to light years after they last worked together. It was claimed that in 2012, only two Real teammates turned up to Essien’s 30th birthday party, and an incensed Mourinho – “daddy” – was left to comfort his boy.

Essien's birthday party. A sad story where only Modric and Carvaliho turned up pic.twitter.com/HSubtYtReh

Now that’s just bloody sad. But boy was he brilliant at Chelsea.

VERDICT: A wonderful player at Chelsea, but a pawn in Mourinho’s quest to win the dressing-room battle at Real. This goes down as a narrow win.

Samuel Eto’o (Inter Milan and Chelsea)
The common theme among those signed more than once by Mourinho is that he has a close, almost familial bond with each player. That Samuel Eto’o branded the Portuguese a “fool” soon after his departure from Chelsea in 2014 suggests he is the outlier. Eto’o’s relationship with Mourinho hit the most jagged of rocks after the manager privately questioned his age in recordings that would soon become rather more public.

The striker scored 12 goals in 35 games in Chelsea blue, but his initial spell with Mourinho was considerably more successful and much more respectful. “Eto’o is the best striker that I have worked with,” said the manager in 2009, in the midst of their only season together at Inter Milan. It would end with a glorious Treble.

VERDICT: A force of nature at Inter; nothing more than a cost-efficient choice at Chelsea. And his arrival helped push Romelu Lukaku out. But wow, that Inter season…

Didier Drogba (Chelsea and Chelsea)
Petr Cech in goal; Terry in defence; Frank Lampard in midfield; Didier Drogba up front. Mourinho’s ideal spine is not difficult to decipher, as the Ivorian is the only striker the Portuguese ever truly fell for. Cristiano Ronaldo (168) and Karim Benzema (79) are the only players to have scored more goals under Mourinho’s tutelage than Drogba (73).

Mourinho once claimed that he “saw the big man crying like a baby” when he informed Drogba and his Chelsea squad of his departure in September 2007. The striker told France Football Magazine that “something is broken” with the club in the aftermath, before stating his intentions to leave. He would later retract those comments, but did claim that “many of us used to play first and foremost for the manager”.

Drogba left Chelsea in 2012, but his football father oversaw his return two years later. The striker’s goalscoring touch had left him by this point – he struck seven times in 40 games – but he was a valued member of the squad for one final season.

VERDICT: “I have had a lot of truly special players, but if I had to choose one I might go for Didier,” Mourinho said in March 2013. The striker was not quite as devastatingly brilliant the second time around, but his impact in the dressing room and on squad morale during Chelsea’s 2015 title-winning season was immeasurable.

Nemanja Matic (Chelsea and Manchester United)
“Nemanja is a Manchester United player and a Mourinho player,” said a delighted Jose in summer 2017, with Matic stating that he “couldn’t turn down” the chance to play under the Portuguese “once again”. Here was a £40m babysitter for the defence, the expensive key designed to unlock Paul Pogba’s midfield potential, a man who proved his loyalty to Mourinho even after a humiliating substitution.

That incident came at Chelsea, the Serb having returned to Stamford Bridge in January 2014. Carlo Ancelotti sold the midfielder to Benfica three years prior in part-exchange for David Luiz, and Mourinho was more than happy to welcome “a fantastic all-round midfielder” back.

But not fantastic enough in Ole Gunnar Solskjaer’s eyes that he should be picked over Fred and Andreas Pereira. Matic has hardly had a look in at Old Trafford this season and he looks certain to leave in January, with Mourinho interested in another reunion for less than a third of the price he paid two and a half years previously.

VERDICT: Mixed. A Premier League title and League Cup under Mourinho at Chelsea, but nothing to show for the only full season they worked together at Old Trafford. Mourinho could make it a best of three decider should he rescue Matic from his United exile.

Seen as ‘the cool older brother’, a ‘leader’ and ‘a buffer’ between players and manager during his brief time at United, Zlatan was a great presence for Mourinho. Ibrahimovic was one of the greatest Premier League players ever with fewer than 100 appearances, but it is his influence off the field, not on it, that Mourinho craves. When Ibra left, Paul Pogba became the dressing room leader. Which has gone about as well as you might expect.

There was talk of another reunion at White Hart Lane. Tottenham are lacking a back-up centre-forward and as of this month, Zlatan lacks a club. But Mourinho dismissed the speculation: “It doesn’t make sense to sign him when we have Harry Kane.”