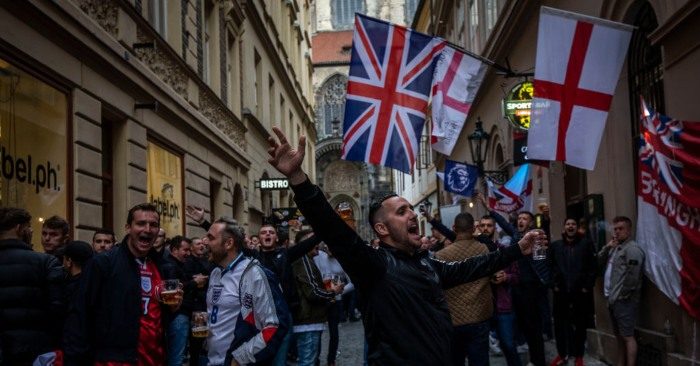 One was Extinction Rebellion. To some they’re brave warriors fighting in defence of the planet as they glue themselves to a road whilst dressed as a rabbit. To others, they’re a pain in the arse – the militant wing of the self-indulgent, middle-class liberal, quinoa-eating vegan virtue-signalling snowflake generation – who are just making it harder to get to work.

The other was the England TwatArmy causing trouble in the Czech Republic drinking, putting up flags and fighting with anyone who wanted a fight. The contrast was striking.

Football so often shows reflects the world we live in and this was a perfect illustration of 2019, with both sides doubtless viewing each other as people-who-are-not-like-us. Two factions, each representative of a different and opposing strand of society.

One group is concerned about the health of the planet, the borderless, profound nature of climate change and the behaviour that drives it. The other was concerned with buying cheap lager, dominating bars and waving flags saying ‘English and Proud’.

One was a mix of men and women, the other almost wholly male. One was a peaceful protest, the other was very much about being neither peaceful nor about protesting anything, except that there should be no surrender to the IRA.

One had over a thousand arrests, the other ironically about ten.

England fans clashed with Czech police in Prague ahead of their match in the Euro 2020 qualification campaign.

While you might feel the Extinction Rebellion mob has too many jugglers per square foot for your liking, along with a higher proportion of Marxist plainsong choirs and free-form jazz bongo players than would be typical of the population as a whole, and even if you think they’re 100% wrong, they’re clearly doing something they think is necessary, something that at least in their perception is for the greater good. Even if that is hopeless idealism, or a huge delusion, who can say such a spirit is a bad thing per se?

By contrast, the England TwatArmy seem drawn from another species altogether and were thinking only of themselves and what they wanted to do on a classic weekend piss-up away from home. There are doubtless cultural, industrial, societal and historical reasons why such people find a home within football and especially within the national team’s following, but we shouldn’t go thinking that they’re not around us all the time. They absolutely are.

We hear a lot about toxic masculinity these days; it is but a new term for how many men have behaved since the dawn of time. This lot may have Colombian marching powder up their beak these days, making them have even less empathy and even more self-important self-belief, but these are the same bullying, braying idiot boys that we all grew up with. The ones who loved to scare and abuse boys and girls. They were the ones who loved practical jokes to humiliate other kids and picked on anyone who looked different. In short, the people who have always made our lives worse.

As videos of the England TwatArmy in the Czech Republic emerged, as we all knew they would, a certainty born out of the knowledge that such individuals are nothing if not predictable, there they were again. Same as ever. Same boorish, bullying men. It’s always men. Being a football twat is an almost wholly male activity. I don’t discount the occasional female presence, but this is a boys club for usually, if not exclusively, white men.

Now, you can argue for as long as you like that this is the outworking of the white male working-class patriarchy being disempowered by the rise of cultural diversity, gender equality, feminism and progressive liberal values. You can argue that they come together to pretend they’re some sort of important, culturally and politically right wing, conservative army, upholding true English virtues if you want. You can say all of these things and maybe they’re true and it may be an explanation as to why it keeps happening, but it is no excuse.

Creating hell in a bar in eastern Europe, or wherever the latest game is to be played, isn’t a blow against the system, it isn’t even rage against the machine, it’s just a massive lack of empathy and bluster which is hiding, I have no doubt at all, a deep self-loathing.

They wave those ‘English and Proud’ flags, but don’t seem very proud of anything except perhaps the certainty of being right that comes with ignorance. English and Proud: what does that even mean? What about being English are they proud of exactly? The Empire? The war? Of not being foreign? It can’t be the old values of tolerance, manners, politeness and modesty as they display none. So what is it? How about being proud of the country’s history of diversity, a national characteristic so powerful that our patron saint is a soldier of Cappadocian Greek origins – roughly from where modern-day Turkey stands. But no, it can’t be that, because they’d rather be someone from Pakistan than Turkey, apparently.

They sing songs in a drunk, dunderheed, droning monotone, delivered in defiance of some illusory foe. This doesn’t look like a celebration at all, it’s too defensive for that. Too aware of its own unacceptability and of its propensity to say the unsayable when together.

As Will Self pointedly said, quite obviously, not everyone who voted for Brexit is racist, but almost everyone who is racist did. In the same way, obviously, not all England fans are intolerant and right wing, but those who are intolerant and right wing will likely say they’re an England fan. Taking over market squares and bars and putting up Cross of St. George flags isn’t the best way to make anyone believe you’re not going to be a problem.

For those of us who want to go gently through this life, this is the stuff of Nowhere Men living in their own Nowhere Land. How could you call it fun? It all seems so old-fashioned. So of the past. Clinging to a world that is gone, or more likely, never even existed. Lonely warriors of their own imagination, isolated in their own delusions, fighting wars no-one else wants to fight against enemies nobody else sees. Desperate for pain to make them feel something. Needing a war to give themselves purpose. Heroes each but only in their own imagination.

I often wonder what the women in their lives think of how they behave? Is it excused as mere laddishness? As banter? As just what happens at the football? As just boys being boys? Or is it tolerated out of fear that the same sort of behaviour will be visited upon them if they are overly critical?

With one there is hope for a new tomorrow, with the other there’s no future and England’s (still) dreaming.

Johnny’s new book Can We Have Our Football Back? is out now www.johnnicholsonwriter.co.uk