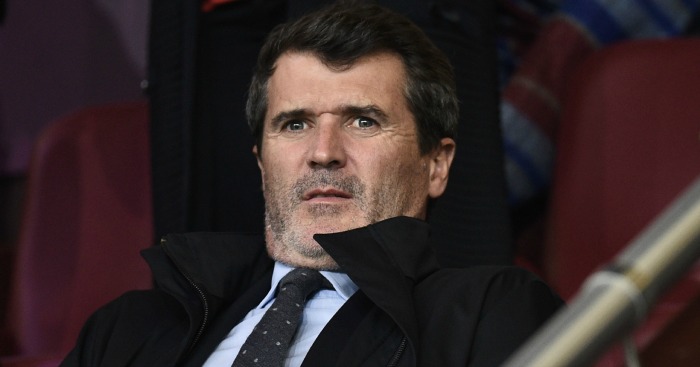 Was Roy Keane actually any good? Richard Keys really is not so sure.

Over the weekend, beIN SPORT pundit Keys questioned whether Keane was a “top, top player”, praising his leadership but doubting his ability on the ball.

The debate started when McAteer was asked about Keane, now Ireland assistant, clashing with a number of players. And it carried on for about four minutes from there. We listened and transcribed it all so you can conserve your energy and use it on being flabbergasted instead.

“You know, I understand how Roy feels sometimes. It’s very frustrating and he’s a person I feel that, you know, he had that much quality, and players can’t live up to that quality and that mindset that he’s got. He gets frustrated with it.”

Gray wades, adding: “There’s a lot of ex-pros that have never made good coaches because of that, because they can’t understand why the players that they’re coaching, who are not as good as they were, can’t do the things that they could.

“I think there’s a lot of great players over the years that have not been able to translate what they could do naturally into being a coach.”

And then it begins. Keys asks the pair: “Yeah, but when you say ‘great players’, was Roy a ‘great’ player? In the sense of…I’m talking of a Hoddle, or a creative type. Those kind of players are frustrated by lesser individuals.”

McAteer responds: “I used to think that, right. All those accolades, how he was at Manchester United, I used to think, ‘I don’t get it.’

“I would train with him for Ireland all the time, and I used to think he was bang average in training. I just didn’t quite get it.

“Then I remember Mick [McCarthy] saying to me: ‘Listen, I want you to play centre midfield’. I don’t even remember who we were playing, but it was me and Roy in the middle of the park.

“After 90 minutes I came off and thought, I know what that’s all about now. You give it away, he wins it back. He demands the best from all the players. He’s all over the park.”

And then it’s back to Keys again.

“Yeah, I get what you’re saying. You answered my earlier question so eloquently, so maybe you can this one: What I’m saying is, the phrase ‘water carrier’, no. He was much more than that. He was a magnificent captain and leader. But was he a top, top player, conductor, orchestrator?”

By this point, Gray is ready to throttle his long-time sidekick.

“I need you to help me understand what I’m trying to get at,” he begins: an excellent Freudian slip. “Yes, he was a great player, yes, he was a wonderful leader. But he wasn’t a magician.

“So the argument was, top players: Bobby Charlton, really struggled to go on and pass on what they knew, they’d get frustrated. But Keane was, he was that, wasn’t he [beats his chest].”

Gray, almost leaning across the desk to fight Keys, is incredulous.

“That was part of him. But listen, I watched him in the semi-final of the Champions League in Turin, against Juventus, himself…

“No, he scored the goal, scored the header,” says Gray. “Leading by example, not just leading through shouting at people. Leading by example as a player. This is when he knew he wasn’t going to play in the final, along with Scholesy. He led that team almost single-handedly and picked them up.”

“Yes, Peter Reid did what Roy Keane does,” Keys interjects once more, to which Gray tells him that “even Reidy wouldn’t agree with you”.

“I think you overlook his ability as an actual footballer because of the image that he’s got. I think we all look at Roy Keane as someone who’s in for fighting, shouting, screaming and pointing fingers. Yes, he had all that, but he could play as well. He could read the game really well. He never really gave it away. He wasn’t one of these players that’s going to spank a 50-yard diagonal to feet. He had it in his locker to do it but he very rarely chose that option. He always chose the easy option, or to win it, give it to Scholes, Scholesy would then open it up.”

“I’d have him in my team all day long,” Gray added, with McAteer agreeing profusely.

“So would I, and you know I would. But you know what I’m saying,” says Keys, not knowing himself what he’s saying.

At this point, it is almost hilarious just how bemused Gray is.

“Would you back Reid against him?” Keys asks, dreaming of the most Proper Midfield Battle ever, before confirming he would.

“Both at their pomp? Is Reidy watching?” came the reply from Gray, who says it would be “an unbelievable contest”.

Keys raises the stakes further, adding: “I think Souness would have had a pocket in his shorts for him.”

“You don’t know,” replies Gray, turning a worrying shade of beetroot. “Keane was a fantastic, brilliant footballer. Don’t underestimate how good Roy Keane was. I mean that. At a time when Manchester United hadn’t won the title for 27 years or whatever it was, all of a sudden they go on this run. Who was there? Who led them?”

“His demands were top drawer,” says McAteer. “You were frightened. He made you frightened not to give it away.”

And then comes the punchline. After well over three minutes of back and forth, Keys has listened to all sides of the argument and delivers one final question.