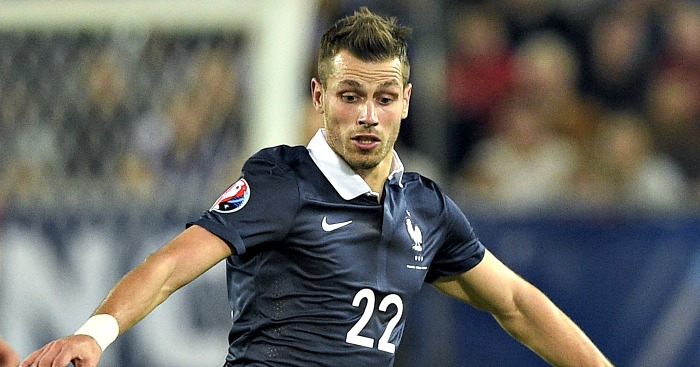 Bernd Leno (Germany)
Iker Casillas may be closer to Spain’s first-choice goalkeeper spot than Leno is to Germany’s, but the veteran is far past his best. It’s like watching an old family dog staggering to fetch a stick but needing a lie down after each journey.

Leno, meanwhile, is one of the brightest young goalkeepers in Europe. While Marc-Andre ter Stegen made the decision to leave the Bundesliga for Barcelona (and a diet consisting only of cup football), Leno has now made 279 career appearances and only turned 24 in March.

“Perhaps you sometimes have dreams of playing abroad, I find it very sexy,” Leno told Sport1 in February. And that right there is a good quote.

Hector Bellerin (Spain)
Jason Denayer is probably Belgium’s best right-back and yet has not been given a minute of action by Marc Wilmots, but it’s Arsenal’s Bellerin who takes this spot. Bellerin is only in France because of Dani Carvajal’s Champions League final injury, and has so far stayed on the bench throughout, with Juanfran the clear first choice.

Lucas Digne (France)
I included Patrice Evra in my five players who would be lucky to keep their place after the first round of games, but Didier Deschamps stuck with Evra for the victory over Albania. The biggest surprise was that, when making changes for the last group match against Switzerland, Deschamps chose not to give the 35-year-old a breather.

Digne is hardly an inferior replacement, having established himself in Roma’s side after moving on loan from Paris St Germain. Instead he’s left carrying the drinks for another famous water carrier.

John Stones (England)
‘Money can’t buy you Stones,’ Everton supporters sung proudly at the start of last season. It can’t buy you minutes on the pitch in France, either. Everton’s Stones and Ross Barkley are England’s only outfielders to have not managed a minute so far.

In Stones’ case, that’s quite an achievement. For England’s final group game, Roy Hodgson made six changes to his team, had Gary Cahill one booking away from missing the last-16 tie and still didn’t call on Stones. Ouch.

Samuel Umtiti (France)
Another late call-up after Jeremy Mathieu was ruled out with a calf injury, the correct response is to ask why in holy f**k Umtiti wasn’t ahead of Mathieu anyway. Just because you ‘play’ for Barcelona… Oh, what’s that?

‘Barcelona are confident of sealing a deal for Lyon’s Samuel Umtiti,’ read a Daily Mirror article on Tuesday. ‘The France Under-21 international’s representatives have spent much of Euro 2016 in conversation with Barcelona after the versatile defender became the Spanish champions’ number one target.’

Mathieu is going to be fuming. This is like Single White Female, football-style. Ish.

Emre Can (Germany)
Liverpool’s all-action Germanic hero, but Joachim Loew sees an awful lot less in Can than Jurgen Klopp does. Either that or Toni Kroos and Sami Khedira are all kinds of better in central midfield.

In fact, poor Can doesn’t stand a chance. He’s actually included in the squad list as a defender, but is third choice in about four different positions. Can is Germany’s fire extinguisher, useful to have around but only to be used in case of emergency.

Morgan Schneiderlin (France)
If Leicester City’s season embarrassed a host of English clubs, the performances of N’Golo Kante have done the same to other French central midfielders. Schneiderlin has lost out on both counts. While Kante is the new star, Schneiderlin, who played 90 minutes for France at the 2014 World Cup, was not even in Deschamps’ original squad. He made the final cut after an injury to Lassana Diarra.

A year ago, Schneiderlin was aiming to be first-choice for his country in a home tournament after moving to Manchester United for £28m. Since then, a player who cost 20% of the price has made him look like a clunky one-dimensional midfielder with his endearing blend of stamina and strength. A penny for Schneiderlin’s thoughts.

Adrien Silva (Portugal)
Such is the rotation in Portugal’s squad, with Fernando Santos desperate to find a winning formula, that 12 of the squad’s 14 midfielders and attackers played a part in at least two of their three group games. That leaves the two Silvas: Rafa has played one game, and Adrien has not appeared at all.

In the case of the latter, that’s really quite surprising. Adrien Silva was a key part of Sporting Club de Portugal’s league campaign, where he has impressed under Jorge Jesus. The Guardian’s pre-tournament preview predicted that he might well start for Portugal. The reality is that there are just so many good central midfielders in Santos’ squad. When Renato Sanches can’t get a start…

Leroy Sane (Germany)
Picked at No. 1 in my top ten youngsters to watch during Euro 2016, you’ll have seen as much as anyone else of Sane in the first two weeks of this tournament if you’ve been sat rocking with your eyes closed by a pond singing ‘Will Grigg’s on fire’, as if locked in a vegetative musical state.

Given Germany’s inability to create clear-cut chances against Ukraine and Poland, it was surprising that Sane failed to feature in either game, nor against Northern Ireland in their last group fixture. He is a lightning fast winger with the capability of stretching a tired defence. Still Low prefers Andre Schurrle, Julian Draxler and Mario Gotze.

Michy Batshuayi (Belgium)
There may be talk of West Ham bidding a squillion pounds for Batshuayi and Juventus also holding a keen interest, but the striker must feel a lot less wanted at international level. Marc Wilmots has given both Divock Origi and Christian Benteke the chance to impress from the bench, but Batshuayi has not had that privilege.

Given that Belgium are in the favourable side of the draw, supporters are hardly likely to protest against the striker’s lack of action; that doesn’t stop it being a bit weird. Batshuayi scored or assisted 26 league goals last season. Surely he’s a better option than an out-of-form Benteke?

Lucas Vazquez (Spain)
There were raised eyebrows when Vincent del Bosque chose Lucas Vazquez over Diego Costa and Fernando Torres for his initial Euro 2016 squad. Those eyebrows were raised further when Vazquez survived the pre-tournament cull at the expense of Saul Niguez.

Vazquez actually started Spain’s last friendly before this tournament, but wholly failed to impress during a 1-0 defeat to Georgia. He hasn’t been seen since.

Instead, Del Bosque has relied on the experience of Aritz Aduriz from the bench. His decision not to rest any players for the third group game means Vazquez may be struggling to make the pitch at all.