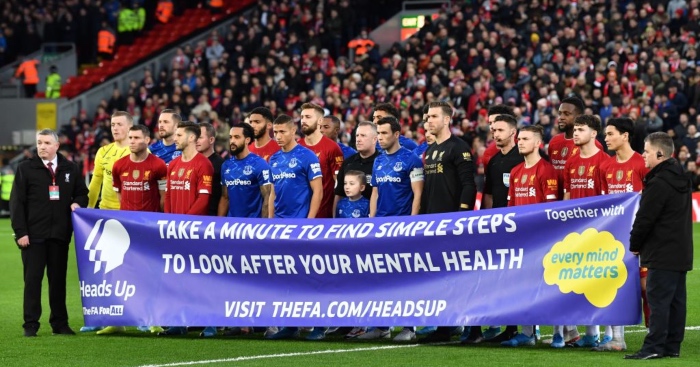 The FA Cup third-round weekend saw football pull together and promote awareness of mental health through the Every Mind Matters campaign. There was a promotional video narrated by Prince William in which he urged people to “take a minute” to think about their mental health, in a follow-up to his very powerful sit-down discussion with Premier League footballers on the BBC earlier this year, and all games kicked off a minute later.

Those were two well thought out initiatives that will have done some good. But the FA and Premier League need to prevent this mental health weekend from becoming the latest awareness flight of fancy and genuinely look at promoting change for those in and outside of the game. They are in a great position to do so.

Poor mental health is a problem facing millions of people every day. Those people either acknowledge their own battles and find ways of dealing with them, or deny those issues to their own detriment.

One in four people admit to experiencing a mental health problem each year and one in six deal with an issue in a given week. Access to NHS mental health services has never been more limited, with average waiting times at over eight weeks for counselling and funding significantly depleted in the last five years.

At the risk of breaking the journalistic fourth wall, I have struggled at times with my mental health. I took medication, had counselling – the works – and feel far better for it. But I had to go outside the NHS for that help and paid significantly for the privilege, as I was told I didn’t ‘qualify’ for counselling, like it was some sort of illness competition. Fortunately I could do that; most can’t.

In life, as in football, we all go through highs and lows and we can all take simple steps to look after our mental health.

That’s why we’ve partnered with #EveryMindMatters ahead of the @EmiratesFAcup third round to encourage us all to #TakeAMinute for mental health.

While football’s involvement in promoting the awareness of mental health, as with homosexuality through the Rainbow Laces campaign, is commendable, those weekends of note pass and we forget until next year, when we remember how much we care again. People are struggling – and footballers are struggling – day in, day out.

It’s all too easy to forget that these pedestal-standing, highly-paid, pampered stars are people first and athletes second. Some of them too will be battling with their mental health on a daily basis.

Gary Speed committed suicide over eight years ago. He finished his punditry role on Football Focus where presenter Dan Walker described him as being on “fine form”, chatted amiably with people at MediaCity as he left, went to watch Newcastle play Manchester United with Alan Shearer, drove home and hanged himself. The sort of tragedy that should have sparked revolutionary change in regrettable circumstances has, in a game infamous for brushing major issues under the carpet, made a negligible difference.

Jose Mourinho recently publicly announced that Tanguy Ndombele was not playing for Spurs, “not based on injuries,” but “on fears of previous injuries that he has had since the beginning of the season”. The midfielder, as far as we know, does not have a mental health problem, but if what Mourinho has said is true – which is always something of an uncertainty – his unwillingness to play is likely a symptom of one.

And while Ndombele may be the sort of player who needs a proverbial ‘kick up the arse’, he is also a 23-year-old man who has moved away from his home country for the first time this summer, presumably away from family, to a city in which he knows relatively few people, for a club-record fee. He’s definitely a man facing huge challenges, who could be suffering. In that situation, who wouldn’t?

The argument that footballers earns loads of money so should be alright is woolly at best and denigrates the potential battles they face. It in fact proves just one thing: that a professional footballer’s mental health problem probably doesn’t stem from debt or financial insecurity. That often comes after they’ve retired.

Footballers are in a favourable position, unfortunately along with prominent politicians and breakfast show hosts, to be able to genuinely effect change. If players and managers speak up fans tend to listen – particularly youngsters, who are growing up in a world fraught with potential anxiety and stress.

The number of footballers seeking mental health support has increased sixfold in the last year, and we need them to be comfortable enough to speak up as Danny Rose and Aaron Lennon have done, and shout louder than the likes of the millenial-snowflake-bashing moron given a platform to air his hate-filled nonsense every morning.

And we need money, not directly from the pockets of players, but perhaps a percentage of the billions of pounds that come from TV rights, or some of what’s made as we pour through the gates to watch the game we love every few days. It’s time for them to put their money where their mouth is, particularly as that mouth speaks so quietly and just once every year.

If you feel like you can take steps towards improving your own mental health, get your own ‘Mind Plan’ by doing this quiz. It doesn’t take long, and is available for more than just one week in an entire year.