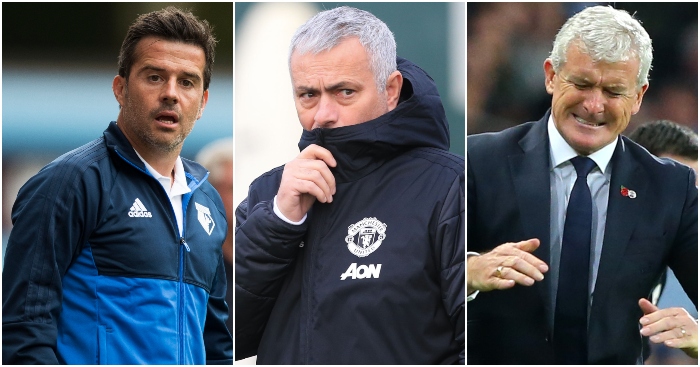 With perhaps a quarter of the Premier League’s managers clinging on to their jobs, we’ve taken a look at what prompted the last 18 managerial mid-season sackings back to the start of 2017/18…

Mauricio Pochettino (Tottenham) – 14th
November 19, 2019, match-day 12
Pochettino’s magic had undoubtedly worn off with many of these Tottenham players, who’ve had a Jose Mourinho-shaped kick up the arse over the last week. After reaching the Champions League final last season, the Spurs boss cut a frustrated figure ever since and his side won only six of his last 24 Premier League matches in charge. Still, MoPo will be just fine.

Javi Gracia (Watford) – 20th
September 7, 2019, match-day 4
Gracia paid for a wretched start after a poor conclusion to last season which was only masked by an appearance in an FA Cup final in which they were tonked 6-0 by Manchester City. It was felt Gracia was unable to fix Watford’s leaky defence and he appeared strangely reluctant to play new signings so the club sacked the Spaniard, waited half an hour, then announced his replacement. Who is already under pressure…

Claudio Ranieri (Fulham) – 19th
February 28, 2019, match-day 28
The Italian lasted 106 days at Fulham during which time it became clear that the Cottagers were f*cked and no one was going to save them. When Ranieri departed after a 2-0 defeat to Southampton, Fulham were 10 points off safety with 10 games to go. He won only three of his 17 matches in charge at Craven Cottage having proved unable to fix their porous defence.

Claude Puel (Leicester) – 12th
February 24, 2019, match-day 27
Leicester appeared to be going nowhere very slowly under the Frenchman and a 4-1 home defeat to Crystal Palace was the final straw after a run of five defeats in six matches. It was the Foxes’ fourth consecutive home defeat in the Premier League – their worst run in 18 years. Sacking Puel and appointing Brendan Rodgers appears to be working out quite well.

David Wagner (Huddersfield) – 20th
January 14, 2019, match-day 22
No one wanted to see Wagner go but a parting was inevitable with Huddersfield coasting back towards the Championship while they sat eight points from safety with 11 points from 22 matches. Mutually consenting Wagner and replacing him with Jan Siewert made no difference.

Jose Mourinho (Man Utd) – 6th
December 18, 2018, match-day 17
The writing was on the wall for Mourinho at Man Utd since a summer in which he didn’t get the players he wanted, after which Ed Woodward briefed journalists about the many reasons he didn’t back his manager’s judgement. He then went to war with Paul Pogba – understandably, the midfielder was behaving like a d*ck – and he lost allies in the dressing room with each passing week before Liverpool hammered the final nail in his coffin. Still, he was right about some things.

Manchester United has announced that Jose Mourinho has left the Club.

We would like to thank him for his work during his time at Manchester United and wish him success in the future. #MUFC

Mark Hughes (Southampton) – 18th
December 3, 2018, match-day 14
Hughes kept Saints up as caretaker boss at the end of the previous season by winning what was effectively a play-off against Swansea. The club saw that as enough to offer him a three-year deal which was terminated after less than half a season following three wins in 22 matches overall. The final straw: drawing with Jose’s Man Utd. Still, at least he still hasn’t done a relegation, even if he has left his last three clubs in the bottom three.

Slavisa Jokanovic (Fulham) – 20th
November 14, 2018, match-day 12
Jokanovic brought Fulham back up to the Premier League playing some thrilling football but he was unable to make it work in the top flight, especially since the club lumbered him with almost an entirely new team and a defence which played like the strangers they were. Five points from 12 games saw Fulham axe Jokanovic, with Claudio Ranieri lined up. “Claudio is risk-free and ready-made for the Premier League, and particularly so for what we need at this moment at Fulham,” said Shahid Khan. Apparently he was not.

Alan Pardew (West Brom) – 20th
April 2, 2018, match-day 32
West Brom’s players won as many Premier League games under Pardew as they stole Barcelona taxis – one. As well as that cab, the Baggies took eight points from a possible 54, leaving them ten points from safety with six games to go. The only question around Pardew’s dismissal is what took West Brom so long? Darren Moore came in and though he couldn’t undo all the damage, the Pardew-less Baggies won three and lost only one of those last six matches.

Mauricio Pellegrino (Southampton) – 17th
March 12, 2018, match-day 30
Southampton won just one of their last 17 Premier League matches under Pellegrino and a 3-0 defeat at Newcastle during which the manager said he saw some of his players give up proved to be the final straw. Having been appointed at the start of the season, Pellegrino achieved the equivalent of 0.93 points per game, the third-worst of any Saints boss in the Premier League.

Marco Silva (Watford) – 10th
January 21, 2018, match-day 24
Watford weren’t shy in pinning the blame for Silva’s sacking squarely on Everton and their approach for the manager two months previously. “The catalyst is that approach, something which the board believes has seen a significant deterioration in both focus and results to the point where the long-term future of Watford has been jeopardised.” Still, Watford would be having a good old giggle about Silva and Everton’s woes now, if they didn’t have their own considerable problems.

Mark Hughes (Stoke) – 18th
January 6, 2018, match-day 22
“I don’t do relegation,” said Hughes less than a month before the Potters decided not to take the chance after five defeats in seven and an FA Cup third-round exit to League Two Coventry. The sack spared him from relegation at QPR and the same happened here, with the Potters continuing their slide back towards the Championship under Paul Lambert.

Paul Clement (Swansea) – 20th
December 20, 2017, match-day 18
The former Bayern Munich, PSG and Real Madrid assistant boss took over a year previously with the Swans bottom of the table. Clement guided them to safety but a repeat of that feat was looking unlikely when they approached Christmas bottom of the table with three wins all season. Clement will reasonably point towards the sales of Fernando Llorente and Gylfi Sigurdsson without the previous season’s top scorer and player of the year being replaced as a primary factor in their struggles. The chaos above him at the Liberty Stadium cannot have helped either.

Tony Pulis (West Brom) – 17th
November 20, 2017, match-day 12
Pulis enjoyed three positive seasons and guided the Baggies to a top-half finish in 2016/17 but a poor start to the following campaign led the club to make a change with the side only a point above the relegation zone. Since the previous March, West Brom had taken only 12 points from 21 games while winning just one home league game in eight months.

Slaven Bilic (West Ham) – 18th
November 6, 2017, match-day 11
The Hammers chose to stick with their former defender through the summer of 2017 when they considered a change and it quickly became clear that their show of faith was a mistake. When West Ham dropped into the bottom three after a 4-1 home defeat to Liverpool, the options they may have had a few months before were no longer available and David Moyes was brought in from the cold to guide the Irons through to the end of the season.

Ronald Koeman (Everton) – 18th
October 23, 2017, match-day 9
“I still believe I can change the whole situation,” said Koeman after a 5-2 home defeat to Arsenal left Everton in the Premier League relegation zone following two wins in nine. The Toffees did not share Koeman’s optimism – he didn’t have much – and the Dutchman was axed for a dismal start following a £140million spending spree launched on the back of a seventh-placed finish the previous season.

Craig Shakespeare (Leicester) – 18th
October 17, 2017, match-day 8
Ranieri’s former assistant jumped into his old manager’s grave when the Premier League title winner was axed after a dire start to the defence of their crown. Leicester enjoyed a bounce when Shakespeare took over as an interim boss, finishing 12th, but his appointment as permanent manager lasted only four months before he was shown the door with the Foxes on six points after eight games.

Frank De Boer (Crystal Palace) – 20th
September 11, 2017, match-day 4
The Dutchman was axed after five games and 77 days in charge. During his brief tenure, Palace failed to score a Premier League goal let alone secure a point. But De Boer knew the score. He was sacked from his previous job at Inter Milan after 85 days.