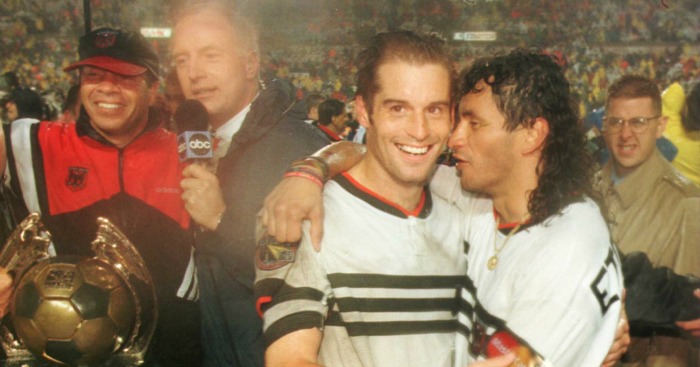 It’s time for another Mailbox regular to write a piece we couldn’t – or wouldn’t write – and this time it’s Peter G writing about choosing DC United, the first kings of the MLS…

It’s April 6, 1996, it’s the 88th minute, and Eric Wynalda of San Jose Clash has just nutmegged Jeff Agoos and curled the ball inside the far post, condemning D.C. United, my club, to a 1-0 defeat.

And I can’t stop smiling.

Why? Because of the words ‘my club’. Rewind over 20 years and I’m sort of watching my hometown LA Aztecs and LA Wolves – but I’m in my teens; there’s also baseball, American football and basketball, and I haven’t yet realised that soccer is the game of games. I will soon enough, but by then the leagues will be dead or dying, and all I’ll have is the quadrennial World Cup as my sporting centre of gravity. But fast-forward to 1996 again, and at the age of 40, I can finally support a club with a fervour held in check by two decades in the wilderness. Two minutes plus stoppage time after Wynalda’s goal, Major League Soccer is one day old, and I’m one day into a lifelong fandom.

They say you don’t choose a football club, it chooses you. But MLS was a completely new league, and by then I had moved to rural Pennsylvania, several hours from any of the stadiums. So I had no history or local interest to influence me, no hallowed turf to mesmerise me. I had to choose and choose immediately, or be left clubless when the great adventure got underway.

I chose D.C. United. In truth, I chose them mainly because they were the closest team geographically. But they also had the coolest home strip (all black!), the most traditional name (Kansas City Wiz? Please.), and two excellent national team players, John Harkes and Eddie Pope. A worthy side with worthy heroes.

But as inevitable with a new team, a mixed bag. The sublime: Bolivian dribbling/dead-ball wizard Marco Etcheverry. The ridiculous: George Gelnovatch, plucked from his college coaching job, lasting two seriously-out-of-his-depth games in midfield. The inexplicable: Tony Sanneh, a natural striker, deployed instead at wide midfield and full-back, looking every lanky inch the square peg.

My favorite player was Salvadoran striker Raúl Diaz Arce. Not just because he was a fantastic goalscorer (23 for the season), but because at 5’9”, he had absolutely astounding leaping ability. I don’t remember how many headers he scored that year, but each one seemed a little miracle. I paid him the ultimate compliment, fusing his two surnames to form my very first Internet password.

We won 16 and lost 16. (No draws, because shoot-outs decided games level after 90 minutes. Don’t ask.) Perfect mid-table obscurity, all one could reasonably ask for. But, as you may know, American leagues have play-offs. Lots of play-offs. As many play-offs as possible without, and sometimes with, rendering the regular season meaningless. In this case it was with. Eight out of ten teams made the play-offs, so of course we were in.

We came from behind to smash the hated Metrostars in the quarter-finals. In the semis, midfielder Richie Williams, The Place Where Attacks Go To Die, one goal all season, found in some unexplored corner of his locker a 25-yard blast that helped bury favorites Tampa Bay Mutiny. Our opponents in the final would be LA Galaxy, the team that a few years before would have been my hometown choice.

Through all this I wavered between sleepwalking disbelief and a narcissism telling me Fate was rewarding my many years of devotion. Hadn’t I watched every available World Cup match since 1966? Hadn’t I read every football book I could find, twice? Hadn’t I invented a football solitaire card game and played off dozens of gigantic international tournaments? (True.)

The final, held on neutral ground near Boston, was ludicrous. Biblical rains waterlogged the pitch; high winds made aerial balls a lottery. But maybe Fate was playing the number 10 role. Trailing 0-2, United’s coach Bruce Arena made two substitutions. One scored in the 72nd, the other in the 81st. Four minutes into extra-time, Pope headed in the golden goal. All three tallies had come from set-pieces, all on deliveries from Etcheverry.

In the next three years DC United would evolve into something like Bayern Munich, playing the best football, winning two more finals, losing a third after the ref missed a stonewall penalty. (Since then, we’ve made one final in 16 years. We have just started this MLS season with a 4-1 defeat and a 0-0 draw).

But if the following seasons were more brilliant, that first season was the best. Nothing was predictable, everything was a gift from the gods. If we lost, that’s football. If we won, yes! If we drew – oh yeah, no draws. I had a club, a club of my own choosing. And against the odds, I had somehow chosen a champion.