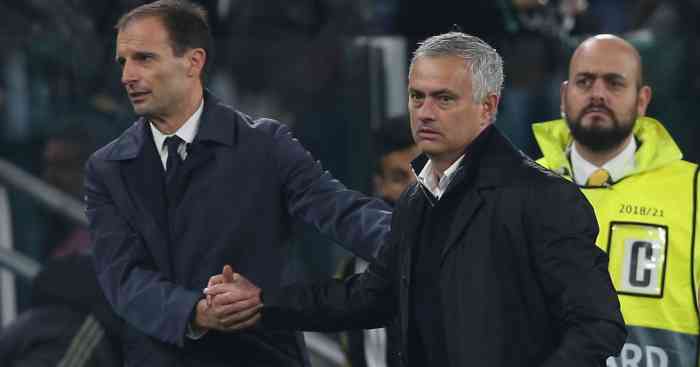 Massimiliano Allegri
Juventus supporters hurled eggs at his car when Allegri arrived to take his first training session in 2014 just six months after he was sacked by AC Milan. When he drives away from Juve for the final time at the end of this month, he will do so with five Serie A and four Coppa Italia winner’s medals.

The last Scudetto was wrapped up four weeks ago, over a month from the end of the season. But still his final term with Juve is seen as a disappointment. This is the first campaign under his watch they haven’t completed the domestic Double and, crucially, they still haven’t won the Champions League since 1996.

Allegri took them bloody close. In 2015 they lost to Barcelona in the final, while two years later brought defeat in Cardiff to Real Madrid. Signing Real’s best player, Cristiano Ronaldo, was viewed as one last throw of the dice, but when Ajax’s number came up instead in the quarter-finals, Juve’s season was over and so too, it was speculated, was Allegri’s reign.

Did he jump or was he pushed? Allegri said exactly a month before the statement confirming his departure: “I already talked with the president, I will remain at Juve next season and we are already planning the next campaign.”

Even if he was nudged towards the exit door, Allegri’s record is such that he will have no problem finding work. He can sit back and wait for a top job to come to him…

Antonio Conte
Juve presumably felt it was time to go in a different direction – or rather back down a familiar road, if reports around Conte are to be believed.

The former Chelsea boss has been out of work after being axed by Roman Abramovich last summer when the Blues’ players’ notoriously short attention span was overdue a kickstart. In two seasons at Stamford Bridge, Conte won the Premier League title in his first year and the FA Cup in his second campaign.

Those achievements and the football world’s familiarity with the unforgiving working conditions at Chelsea have allowed Conte to take a year off and wait for a suitable offer. Now, though, the 49-year-old is ready to get back to work.

He is ’90 per cent certain’ of being back in management by the start of next season, while saying: “There is a 60 per cent chance that I’ll stay in Italy.” AC Milan, Inter and Roma are all said to be sniffing around Conte, but Juve also fancy bringing back their former captain and manager for another stint.

Conte at least can tell Juve he knows how to beat Ajax on the way to winning the Champions League. He was in the side which beat the Dutchmen in the final on the most recent occasion they lifted the European Cup in 1996.

Jose Mourinho
Despite his reputation being in tatters in the Premier League after unceremonious exits from Chelsea and Manchester United, Mourinho is in a similar position to Conte. The Portuguese coach can still be choosy on the continent – hence why he has turned down ‘three or four offers’, with one said to be from Benfica – but he is getting restless on the sidelines.

Jose wants a club to tap him in: “I want to train a club, I want to find a place for this summer, in June for the pre-season.”

Most of the jobs seem to be coming up in Italy, where Mourinho drove Inter to the Treble in addition to his first Serie A title in 2009.

Bayern Munich have also been mentioned as a possible destination, which would certainly fit Mourinho’s agenda if the PSG job isn’t up for grabs: “I would like to win a third Champions League with a third club and to win a fifth league in a fifth different country.”

Michael Ballack reckons Jose would “bring a certain glamour” to Bayern and the Bundesliga. “With a coach like Mourinho, it’s probably easier for a club to get top stars,” he added, presumably forgetting everything about Mourinho’s last two years.

Jose Mourinho: the man with an answer for everything 😂 pic.twitter.com/P2fJrnPDGV

The former Arsenal manager may be approaching his 70th birthday but there is plenty of talk – or wishful thinking, at least – that the Frenchman still has one last job left in him.

That won’t be at Fulham, who have reportedly twice approached Wenger this season and both times they have been turned down. He’s not that desperate…

Wenger seems to have enjoyed his first year away from the game after a 22-year stint at Arsenal ended this time last year and, having left all the grief behind, a full-time coaching role may no longer be to his taste.

So talk of offers from Lyon and PSG of a general manager role may be more to Wenger’s liking.

Laurent Blanc
The former France star has always said he will wait for the right job but how long does any manager have to be out of the game before they become irrelevant?

Blanc has been out of full-time work for three seasons after leaving PSG in 2016. It not like he needs the money. Apparently, he took a €22million pay-off from his last gig after leaving “a significant mark on the great history of Paris Saint-Germain”.

The 53-year-old also has success with Bordeaux on his CV and his two years in charge of the France national team are viewed in a positive light given the absolute chaos he inherited from Raymond Domenech.

The former Manchester United defender was linked with the caretaker role at Old Trafford in the hours of confusion between Mourinho’s sacking and the emergence of Ole Gunnar Solskjaer as a temporary replacement. This summer, he has been linked with Roma, Lyon and Celtic. Those offers are unlikely to get any grander if he insists on continuing to play a waiting game.