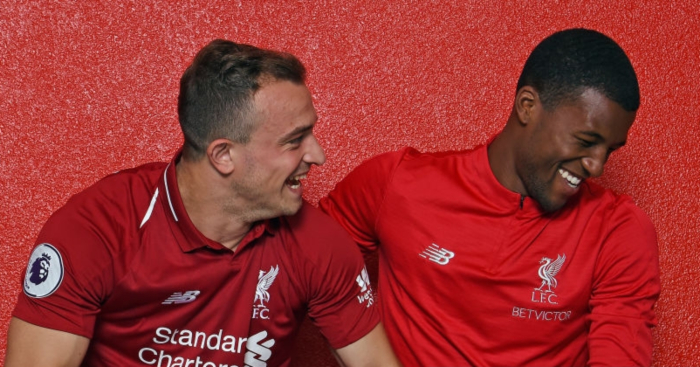 It really does feel like the right time to look at the best Premier League signings from relegated clubs. And we’re talking players signed the summer straight after relegation, so January arrivals can sod off.

Georginio Wijnaldum, Andy Robertson, Xherdan Shaqiri (all to Liverpool)
While Jose Mourinho continues to complain about a lack of backing in the transfer market, he would do well to remember that the “absolutely incredible” Andy Robertson was signed from relegated Hull City, with Sunday’s match-winner joining after Stoke’s demise a year later. To complete the set, Georginio Wijnaldum ran proceedings from midfield, two-and-a-half years after he was part of a Newcastle side that dropped down to the Championship.

The Liverpool vultures have a history of picking at the dead carcasses of relegated Premier League clubs. Stephane Henchoz joined from doomed Blackburn in 1999 and Peter Crouch swapped Southampton for the European champions six years later. Jermaine Pennant was the man of the match in the Champions League final ten months after leaving second-tier Birmingham. But it seemed their transfer window magic had worn off with Charlie Adam and Danny Ings, neither of whom particularly impressed after arriving from Blackpool and Burnley.

That was until Jurgen Klopp stepped in and made a habit of treasuring another club’s trash. In each of the last three summers, he has found a diamond among the rubble. After Wijnaldum, Robertson and Shaqiri, Phil Bardsley had better start looking at houses in the Merseyside area.

Roy Keane (Nottingham Forest to Manchester United)
It is easy to forget that professional grumpy man Roy Keane once suffered the ignominy of relegation. And there is no doubt he was one of the absolute best to have ever done so. The midfielder was as close to blameless as you can get for Nottingham Forest’s demise in 1993/94, earning a spot in the PFA Team of the Year despite Brian Clough’s side finishing bottom come May.

Keane was just 21 when he was asked to breathe life into a side that had been strangled by the sales of Teddy Sheringham and Des Walker. His form in the first ever Premier League season was such that the country’s best clubs started to take notice, and Forest were forced to take action. Keane agreed to sign a new deal at the City Ground with a relegation release clause, leading to Clough branding the club’s most valuable asset a “greedy child” who “is not going to bankrupt this club”.

Far from it. The season had barely ended when Blackburn announced they had agreed a £4million deal to sign Keane, only for Kenny Dalglish to realise there was an issue with the paperwork. Ever the opportunist, Alex Ferguson moved quickly to tie up a £3.75m British record transfer. Forest used the money to bounce back from the second tier at the first time of asking, while Keane went on to claim 17 trophies in 12 years at Old Trafford.

Joe Cole (West Ham to Chelsea)
The best team to ever be relegated from the Premier League™, West Ham were always likely to have not only their entire spine, but each of their major organs removed in the aftermath of their 2002/03 downfall. It was too good a squad and too troubled a club not to be ruthlessly picked apart.

Despite submitting a transfer request within 24 hours of their fate being sealed, Jermain Defoe had to wait until January to be sold to Tottenham. But Glen Johnson (Chelsea), Freddie Kanoute (Tottenham), Trevor Sinclair (Manchester City), Paolo Di Canio (Charlton) and Lee Bowyer (Newcastle) were all shipped off immediately, the club’s various parts being scattered across the country.

Joe Cole was always the most coveted, the most sought after of the many talents West Ham possessed. Named Hammer of the Year at the age of 22 as the club failed to beat the drop, the newly minted Chelsea soon came calling. “Without Gianfranco, I need a player who can dribble – and I think Joe Cole is that kind of player,” said Claudio Ranieri, backing Cole as his new Zola.

It was quite a weight to place on such young shoulders, and while Cole understandably struggled to emulate one of the club’s finest, most popular players, he fared well. He played 50 times in a trophyless first season, then formed a crucial if controversial part of Jose Mourinho’s dominant, title-winning side. It was a far cry from being managed by Glenn Roeder and playing alongside Sébastien Schemmel.

Scott E. Parker (West Ham to Tottenham)
“When you think about it, he was sitting there all summer. He could have been nicked by anybody. I don’t know how somebody else didn’t sign him. I don’t know. It took three or four months to get him but we got him in the end and we are delighted to have him.”

It really was quite the coup for Tottenham when Scott Parker joined for £5.5m, just four months after being named FWA Footballer of the Year. The midfielder won hearts and minds at West Ham in 2010/11, earning a place on the six-man PFA Players’ Player of the Year shortlist, winning his first England cap in five years and moving Carlton Cole to literal tears with an “inspirational” team talk.

Parker started the following season at Upton Park, but left after just four Championship games to return to his rightful Premier League home. In doing so, he became the only player to represent clubs in north, east, south and west London, winning the Player of the Year award in his first season at White Hart Lane. He was sandwiched between Luka Modric (2010/11) and Gareth Bale (2012/13), but for some reason Real Madrid never came calling.

Phil Jagielka (Sheffield United to Everton)
To this day, Neil Warnock will insist that Sheffield United’s relegation in 2007 was unjust. Carlos Tevez chicanery aside, the Blades surprised plenty with just how well they acclimatised to life in the Premier League, drawing with Liverpool on the opening day and beating Arsenal, when Phil Jagielka replacing the injured Paddy Kenny as goalkeeper for more than half an hour.

United conceded just one goal more than fifth-placed Tottenham all season, and much of that was down to Jagielka. The centre-half soon looked a natural in the top flight, not missing a single minute in his first campaign and earning a move to Everton. He is a two-time Player of the Season at Goodison Park, has scored the winner in a FA Cup semi-final penalty shoot-out, and once equalised in stoppage-time of a Merseyside derby with a 30-yard half volley.

Oh, and David Moyes used him as an example to show multi-Premier League-winning centre-half pairing Rio Ferdinand and Nemanja Vidic how to defend. Of course he did.