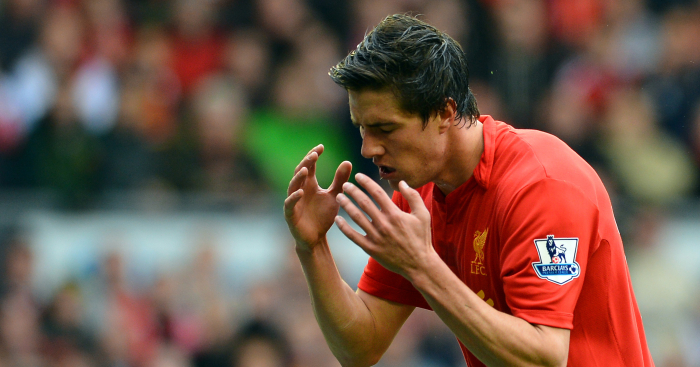 You, your mate Alan down the pub and his uncle’s dog all know that Kenny Cunningham holds the record for the most Premier League appearances without ever scoring in the competition. His 335 games without a goal sets the bar that all other goal-shy players strive to reach.

The Premier League is littered with legends who starred without ever scoring, such as Tony Hibbert (265 games), Lucas Radebe (197 games) and Djimi Traore (111 games). But which current Premier League players have gone the longest without finding the net?

Here are the five players, currently contracted to Premier League clubs, who have made the most appearances in England’s top flight without ever scoring.

5) Eliaquim Mangala (59 games)
Not since February earlier this year has Eliaquim Mangala adorned a Premier League pitch. The centre-half joined Everton on loan from Manchester City a month prior, one of the final pieces of Sam Allardyce’s defensive puzzle. Yet after making his debut in a 5-1 defeat to Arsenal, his spell was cut painfully short through a long-term knee injury in his second game.

The 27-year-old been absent for the subsequent nine months, a pregnant pause in a stalling career. A start in a Premier League reserve victory over Blackburn at the start of November marks the sum total of his entire season, as he looks to regain fitness before another probable loan elsewhere. His City contract expires in summer 2019, so he might well be running out of time to break his Premier League duck. He has two own goals – including one on his debut – but none at the right end.

4) Cedric Soares (98 games)
Right-backs are hardly famed for their goalscoring prowess, not least ordinary ones who are just 5ft 8. Take Cedric Soares for example: in 340 career games across his three club sides and various Portugal age-group appearances, he has scored just five times.

One goal came for Portugal’s Under-16 side. He scored twice in five seasons for Sporting. He netted against League One Wigan in the quarter-finals of the 2017/18 FA Cup. His only strike in 33 games for Portgual’s senior side was a deflected effort in the 2017 Confederations Cup.

But in the Premier League, he has almost brought up a century of goalless games. The 27-year-old has had 59 shots in England’s top flight since making his debut in summer 2015, but is yet to score a probable consolation in a 14-1 defeat.

Steve Cook, Bournemouth sixth-highest Premier League goalscorer ever (9), is the only man to make more appearances in the competition (120) than Simon Francis (115). Yet the former England youth international (and never England senior international) does not boast the same record in front of goal. Having taken 29 shots since he made his Premier League debut, he probably isn’t that bothered. But at 33, time is running out for the man whose last career goal came in their Championship-winning season.

2) Martin Kelly (123 games)
If there is any discernible lesson here, it is quite a simple one: if you want to score in the Premier League, do not become a right-back.

One-tournament weirdo Martin Kelly has never really been close to realising his childhood ambitions of netting from two yards after a 33-second goalmouth scramble in the greatest league in the world. He only has four assists to show for his 123 appearances, and has had an impressively low 32 shots in ten Premier League seasons. Does he not realise he’s actually quite tall and can go up for corners?

1) Danny Simpson (208 games)
He might have a Premier League winner’s medal, but Danny Simpson does not have a Premier League goal. Sir Alex Ferguson could not coax one out of him at Manchester United, Paul Ince and Sam Allardyce fared no better in one season at Blackburn, Chris Hughton and Alan Pardew found no luck at Newcastle and Harry Redknapp failed to achieve the unthinkable in just one game at QPR. Four managers at Leicester have so far joined the illustrious list of managers to oversee one of the Premier League’s longest goalless streaks.

Only five players have ever made more Premier League appearances without scoring. Simpson is 35 games behind Stephane Henchoz and 44 off the pace of Richard Shaw, while 56 and 57 matches separate him from Des Walker and Tony Hibbert respectively. But with Kenny Cunningham a full 127 games ahead of Simpson in the non-scoring stakes, he has some way to go.