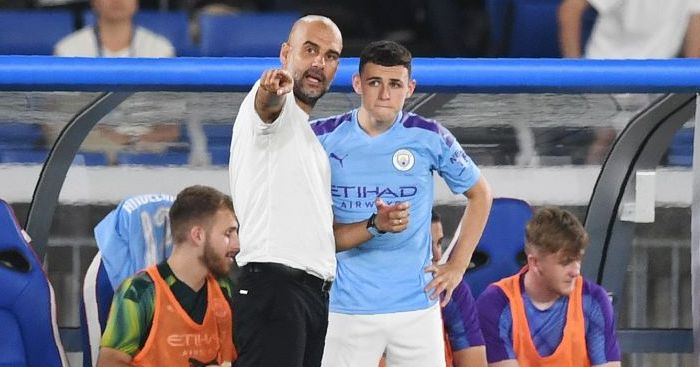 There is little immediately obvious that Pep Guardiola and Aidy Boothroyd have in common. One is an iconic, generational coach who has helped revolutionise the profession, and the other is currently overseeing a Manchester City crisis. But one indelible characteristic they do share is a risk-averse, almost timid and fearful management of England’s brightest young spark.

“There is a fine line to tread,” Boothroyd said this summer. “I have got to look after Phil.” And that he did; Foden started the first game of the U21 Euros and scored a quite wondrous goal against France. He was then inexplicably benched for the defeat to Romania, with a 3-3 draw against Croatia confirming England’s tournament exit and ensuring that the teenager would be guarded against such dangers as regular football over a sustained period.

Two goals and two assists in two qualifying games this season for the Young Lions does rather prove the folly of handling such a talent with safety gloves and wrapping him in cotton wool, sheltering him from the game’s harsh realities. He has become Schrodinger’s footballer: locked inside a box by his protectors and trapped between Foden the irresistible idea and the teenager growing predictably familiar with the confines of his own room.

But as the media and fan hysteria reaches an ear-piercing crescendo, it is worth considering that one of his mollycoddling parents has previous with two of his most famous sons. And his approach most certainly worked with Sergio Busquets and Thiago Alcantara.

Of the countless players to whom Guardiola has given senior first-team debuts, Busquets (191) ranks first and Thiago (144) third in terms of overall appearances under the Spaniard. Pedro (167) fills out the podium positions but the relevance the other two hold with regards to Foden is obvious: as midfielders they form the crux of his tactical plans, instilled into them at a young, impressionable age instead of being bought ready-made.

Both had vastly different learning curves at the Nou Camp. Busquets had the benefit of featuring for Guardiola at youth level, learning his complex requirements as a defensive anchor and attack instigator away from the spotlight. One full season under his management for Barcelona B prepared him for promotion to the first team when Guardiola was appointed as replacement for Frank Rijkaard in 2008.

Yet even in his first campaign, Busquets was no regular. He started 16 of 38 La Liga games and seven of 13 in the Champions League – including the semi-final second leg at Chelsea and final against Manchester United. Busquets played almost as many minutes (750) in their nine Copa del Rey games in 2008/09 than he did in their final 20 league games from January onwards (752).

Thiago had a more staggered integration, one Foden might consider familiar. His debut came as a substitute in May 2009, playing 15 minutes in the 36th game of a La Liga season in which the title had already been won. His appearances thereafter were limited to equally meaningless games at the most meaningful period of his development.

It was only in the 2011/12 season – his fourth in the first team – that Thiago started more than half (20) of Barcelona’s La Liga games, and even then he barely featured in the Champions League beyond the knockout stages as they reached the semi-finals.

Busquets made his first-team debut at 21. Thiago made his at 18 but was made to wait until nine days before his 20th birthday for his first La Liga start. Foden, having only turned 19 in May, is already further ahead.

Therein lies an eye-opening statistic: Busquets had not played a single minute of senior football by the end of the season in which he turned 20; Thiago had played 1,118, starting 11 times; Foden – with eight months in hand – has more starts (14) and minutes (1,461) than both combined.

When viewed through such stark numbers, it puts the constant and tiresome demands for a teenager to be immediately blooded into a world-class team ahead of more physically and emotionally mature, trophy-laden players into a ridiculous context. For a country that has seen Michael Owen, Wayne Rooney and even Paul Gascoigne fizzle out in their later years after early introductions to this whole new world, it is irresponsible and disingenuous.

Guardiola has perhaps not helped himself, providing evidence for his own prosecution by referring to Foden as “the most, most, most talented player I have ever seen in my career as a manager”. But that, and his recent declaration that “he is the only player that can’t be sold under any circumstances, not even for 500m euros”, was simply an attempt to stem the tide, to reiterate his faith.

All it did was add fuel to a raging fire and lead to more questions. But his next sentence – “when David Silva leaves, we know exactly who our new magician will be” – provides some answers.

Busquets was introduced into a Barca team that had just finished third, with Yaya Toure and Seydou Keita his competition in defensive midfield. Thiago jostled with Xavi and Andres Iniesta in the same position. Foden is up against Silvas David and Bernardo, as well as Kevin de Bruyne, Rodri, Fernandinho and Ilkay Gundogan, with a raft of other attacking options if he wished to hedge his bets further forward.

Time will tell, but David Silva’s departure and Fernandinho’s advancing years, coupled with Foden’s own inevitable growth, will likely see him emerge from his supposed lack of teenage kicks and become an integral cog in the City machine next season, if not before.

Away from the noise, Guardiola has earned belief and patience when it comes to this gradual drip feed for gifted young players; Busquets and Thiago prove that we will get our Phil – eventually.