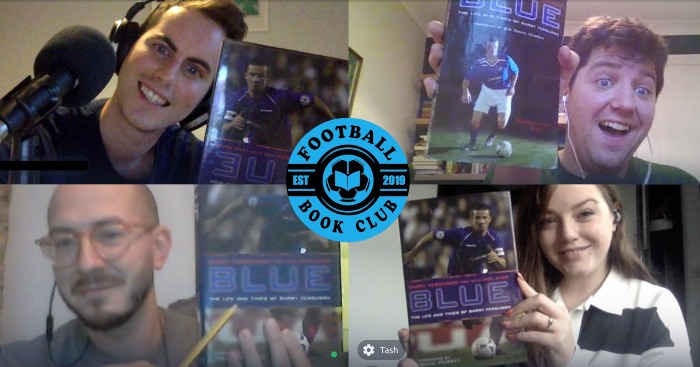 Forget the latest bestsellers or Booker Prize winners. The Football Book Club podcast are the only book club who instead read another footballer’s autobiography every week.

This week, it was the turn of ex-Rangers and Scotland captain Barry Ferguson. We on The Football Book Club podcast have read many footballers’ autobiographies and, largely, they follow a ‘GOALS! SEX! FIGHTING’ structure we described here.

But sometimes footballers try something different. Maya Yoshida’s ‘Unbeatable Mind’ was filled with small wisdoms. Louis Saha uses his book to share his thoughts on the 2008 financial crash (for some reason). And Garry Monk used his as a sleeping aid by listing every match he’s ever played or managed in excruciating detail.

But this week’s book – Barry Ferguson’s ‘Blue: The Life and Times of Barry Ferguson’ – is the first book we’ve read that is basically a 300-page apology. For that most heinous of acts – joining Blackburn Rovers.

… Also it’s the first book we’ve read so far to thank not one but two Indian restaurants in the acknowledgements. But that’s by the by.

‘Blue’ was written in 2006 – a year after Barry returned to Rangers. And in his efforts to win the fans back he decides to talk about his time at Rovers with the same kind of regret you hear when a pensioner tells the story of how they had their savings robbed by a cold caller.

Given the book is called ‘The Life and Times of Barry Ferguson’ and Barry was only halfway through his career, there aren’t really many times to dwell on. The times are very much limited to late 90s, early 00s. About the timeframe Travis were popular.

However, we’ll let him off because the title does make it sound like a Lord of the Rings spin-off for a hobbit you kind of forgot.

But what did we learn from it? Here are our three biggest findings from Barry’s very hasty memoirs:

BARRY LOVES RANGERS FAR TOO MUCH
As we mentioned above, poor Barry is desperate to prove the Rangers fans he’s still one of them.

However, naturally, he overcompensates by swearing allegiance to them like Rangers are a despotic military state with Paul Le Guen as their divine leader.

The book is packed with Barry saying how proud he is to wear the Rangers shirt. But in doing so, he also feels he has to say that all other shirts are rubbish.

Barry doesn’t like to swap shirts. As he says ‘why would I want any other shirts?, bizarrely singling out Parma in the process. ‘What’s so special about a Parma shirt? When I finish my career I just want to look back at my thousands of Rangers shirts’, is the gist of it.

Rumour has it Barry’s wardrobe doesn’t even contain a button-up shirt. “Why would I want a Ted Baker shirt?” asks Barry (probably). “I’ve got this Rangers one I wore against Kilmarnock in 2007.”

Barry. We get you’re sorry. But there’s apologies and there’s ‘I love you so much I want to be cremated in you’.

We dedicate this week’s episode to Barry Ferguson’s extremely high shorts, as seen on the back of his book.

BERTI VOGTS LOVES BRAVEHEART FAR TOO MUCH
Talking of loving things too much, Barry tells the story of how former Scotland manager Berti Vogts tried to win over Scottish fans by whipping them into a frenzy using, presumably, the only Scottish reference he knew – ‘going all Braveheart’ as Barry calls it.

Berti stopped short of painting Christian Dailly’s face blue or putting Mel Gibson in goal. But he did try and get Paul Lambert to meticulously practice carrying saltires out onto the pitch. “We will go out, pick this up, shake the flag and rouse the crowd,” says Berti, as though he’s choreographing a weirdly patriotic Pussycat Dolls video.

Barry didn’t like it. And, sadly, Berti was soon sacked. Just before he tried to implement his other Scottish ideas, like getting Ewan McGregor on the coaching staff and asking The Proclaimers to run training sessions (insert your own 500 miles joke here).

GRAEME SOUNESS CAN SLEEP STANDING UP
Finally, as we mentioned above, Barry tries to spend as little time as he can talking about Blackburn like they’re Voldemort or something.

However, he does have one revelation from his time there.

Apparently, his then-manager Graeme Souness, proudly once told Barry that he can sleep standing up. Which is exactly as terrifying as we’ve come to expect from him and frankly the less time we dwell on this the better.

Overally, it’s basically the ultimate premature book. To put his age into context, it would be like if Danny Ings decided to write his autobiography right now. And as much as I like Danny Ings, I can wait a few years to read ‘Stranger Ings: My Autobiography’.

However, it’s not too bad and there is an extended sequence where Barry vividly describes a dream in which he can’t scream because his tongue has turned to bacon. So it’s a thumbs-up for that. And for this and more of Barry’s life and times, listen to the episode here.

CLASSIC FOOTBALL AUTOBIOGRAPHY CHECKLIST
Ridiculous 80s hair on the front cover? No, but he has very high shorts on the back cover
Does he talk about herself in the third person? Not once, which he gains a point for.
Does Roy Keane turn up? No
Did you learn anything meaningful from the book? Which Indian restaurants to go to if I’m ever in Glasgow.