Home Johnny Nic The football revolution will not be televised. It’ll be podcasted… 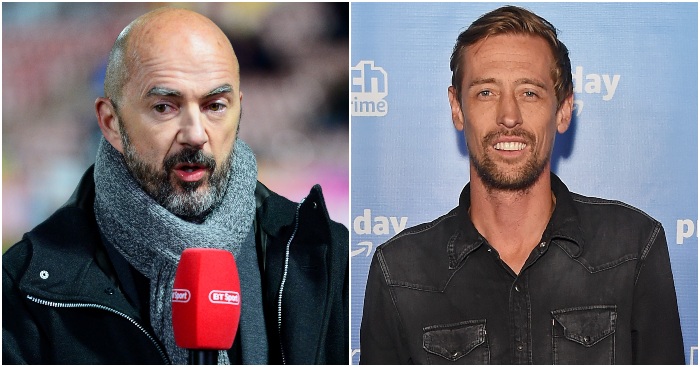 Have you noticed there’s a football broadcasting revolution going on?

It’s Monday, and that means for me and for hundreds of thousands of football fans, it is a big podcast day. The day when we download pods to listen to their various interpretations and observations on the weekend’s action. They have become an indispensable warp and weft upon which we weave our football life.

For me this means at the absolute bare minimum I‘ll be listening to the Guardian’s Football Weekly, the Totally Football Show and 5live’s Football Daily. However, if I’ve got the time – and I often do because I don’t have a proper job – I will catch up with many, many others too, rarely missing, at some point in the week, Set Piece Menu, The Game, The Offside Rule, Football Ramble, Off The Ball and That Peter Crouch Podcast (when there’s a new episode). Added to that I’ll Listen Again if I missed them live to various talkSPORT and 5live shows. I’ll hoover up Danny Kelly and Simon Jordan’s Boot Room To Boardroom and Football’s Deadly Sins pods, also talkSPORT’s Press Box, Final Word, Trans Euro-Express and On The Sporting Couch, plus any amount of BBC Sounds programmes too including World Football and 606 with ABB and Chris Sutton if I’ve missed it live. Some of these are three hours long, so they fill up a lot of my time every week.

If you look at any podcast aggregator, there are now hundreds of football ‘shows’. It is nothing short of incredible. It would be genuinely possible to fill every 16 waking hours of every day listening to football podcasts and still not listen to them all. And here’s the amazing thing, a hell of a lot of them are really good, made by entertaining people who have insight. Indeed, the lack of expensive technology needed means you can do one from your back room, or from professional studios and it pretty much sounds the same.

Because of all the different platforms and ways to access podcasts, numbers of listeners to any specific one are to say the very least opaque. Even within the BBC, they’re not sure. You can apparently be #1 on iTunes due to some twists and turns of their algorithm being based at least in part on the number of subscribers and the number of reviews any podcast has, even whilst not having the most listeners. It also allegedly favours new podcasts over ones which have been running for a long while.

It’s clear the BBC, with their Sounds app, are investing heavily in this new medium with a plethora of pods about every issue under the sun as well as re-edits of live shows that can be downloaded.

So what’s going on here? Why an aural revolution and why now? Podcasts have been around for at least a decade. We used to do one ourselves called PodBall back in 2008 but in the last year or two, the amount of them as gone off the scale. Has the demand for all this football broadcasting grown exponentially in recent years or was it always there?

Well, for a start, the cultural trend to want to personally curate our media in order to get it to fit into our lives and ensure we only expose ourselves to the stuff we enjoy, is now a normal part of life, the way it never used to be, as technology has made it easy and seamless to do so. The idea that we have to fit our lives around broadcast media rather than the other way around, now seems very outdated. So that this should extend to the aural media is wholly in keeping with the zeitgeist.

Podcasts play to my and many others roots because my primary source of football media has always been aural via radio, going back to the Medium Wave nights of my childhood endlessly turning a small plastic radio around to catch a better signal through the swell and fade of such a big world on so dark a night, dreaming of the distant places football was being played and of the grown-up world I knew nothing about.

Podcasts are also popular, I believe, because the modern world demands that many of us live through long periods of being alone. Whether it is a commute to and from work, or because more of us are single for longer than was once the case, it is very easy to get isolated. As well as being alone, there is a problem with loneliness. A study by The Co-op and the British Red Cross revealed over nine million people in the UK across all adult ages are either always or often lonely. Television doesn’t stop you feeling lonely or alone but I believe the more intimate aural medium of radio and podcasts can. A podcast made by people whose voice and point of view you like helps assuage such feelings. You feel you are with friends and psychologically you are inhabiting the same space as these often smart, well-informed, familiar and friendly voices.

Given it is an economic model which has been pursued for the last 40 years that has led to isolation and deprivation on a deep, nationwide scale, with communities shattered and many of us shut off from each other in our individual financial and cultural enclaves, it is no surprise that we’re a lonely nation in need of human warmth, nor that we might turn en masse to a medium which can deliver that.

Bolton manager Phil Parkinson resigned on Wednesday, but should they have been allowed to postpone their game this week? On the Totally Football League Show, @adrianjclarke said that was unfair on the rest of the division.
Subscribe ➡️https://t.co/JyCSOmutUy pic.twitter.com/WVQ6Yh3PaH

But it is more than that, I think. Podcasts improve us. Selecting broadcasts by educated, informed people are the antidote to the crushing political and cultural idiocracy that we live under. I’m a big fan of the Totally Football suite of pods which cover Premier League, EFL, Scottish and European football, simply because everyone involved knows their stuff. It’s no more complex than that and I’m sure it’s the same for all fans of any pod. Add in the fact that listening to a pod fits well in our lifestyle and it isn’t hard to see why this big growth is happening.

Superb podcasts such as Set Piece Menu which frequently discusses deeper issues to do with the game, the people who watch it, the society it is played in and the media it is broadcast on, are the aural equivalent of in-depth think pieces. There is probably no better example than Set Piece Menu of how podcasts can provide a kind of football step-family. Familiar, reliable and welcoming, entertaining and intellectual but with a lightness of touch that makes it very accessible. In truth, all the best football podcasts do this.

Great pods are like your mates have come round for some tea or a glass of something cold. They have a natural ease to them. And I’m sure this is why they are compulsive and have become such a cornerstone of our football lives. They are also the opposite of the crud-o-crats in mainstream media who are filling up their sidebars of shame with dreck, who are busy twisting truth and fictionalising facts in order to garner clicks and readers in a pursuit of the dumbest dullards in the mistaken belief they are the masses, when this huge expansion of interest in podcasts proves rather the opposite. It proves our thirst for expertise, for wit, for wisdom and knowledge. In a visual age where ever more subscriptions can deliver ever more televisual excess, it is counterbalanced by a medium which lives in the landscape of the mind

And this must also be a major reason for this huge expansion. It won’t have escaped your attention that almost all of us have anywhere between nothing and not very much in the way of money and assets, especially those under the age of 40. With 10 million falling into the new ‘precariat’ class, an average wage of around £27,000, with many living off far less, and students running up huge debts in return for an education that should be a right, not a privilege and paid out of the public purse, because educated people are an asset to the economy and society, the vast majority of us do not have spare money to spend on football media. Poverty, though widespread, has been made invisible to those who do not suffer from it and has been normalised to those who do.

This week: The Entourage. Neymar has one, so does Messi (albeit less visable). Hinchcliffe didn't have one. Who are they and do they actually help or hinder a superstar player's career? https://t.co/ZhXmr7MKPI

This is why paywall football remains resolutely stuck down in the boondocks of popularity and viewing figures for 112 of Sky’s 128 Premier League matches attracted under 2 million viewers, many less than a million. It’s why BTSport’s highest number watching last season was just 1.7 million in a nation of 66 million citizens. Even those who do watch it tend to jump ship almost as soon as the game ends. Podcasts are evidence that there is a big audience and thirst for football thought and discussion, but TV usually finds it hard to retain even half of its audience as soon as the game is over.

But football is still massive. Millions love it. We know this because over 30 million people watched England v Croatia in the 2018 World Cup semi-final on ITV, the biggest audience any single channel broadcast has ever achieved in the history of UK broadcasting. The third largest audience ever after the 1966 World Cup Final and Princess Diana’s Funeral, both of which were simulcast on two channels.

However, our 27-year-long disenfranchisement from live top flight football on TV is now absolutely chronic, with supply far exceeding demand. The long established financial model is almost at breaking point under the weight of public indifference to paying for that which has cost so much to acquire. But the rainbow of podcasts and radio too have increasingly stepped up to the bar to slake our thirst for all things football and are helping to entertain the huge lost audience for live football. They are keeping a flame under our passion, replacing hours watching games on TV with hours spent listening. And at no cost, they are the best value product on the market.

A football broadcasting revolution is underway, old certainties are in flux and podcasts are one of the best and most important things to have emerged from the early battles in what will be a long war. They point to the viability of, and desire for, a brighter, cleverer, more informed, more inclusive, more entertaining, less lonely future, available to all and in the common embrace. Viva la podcast revolution!