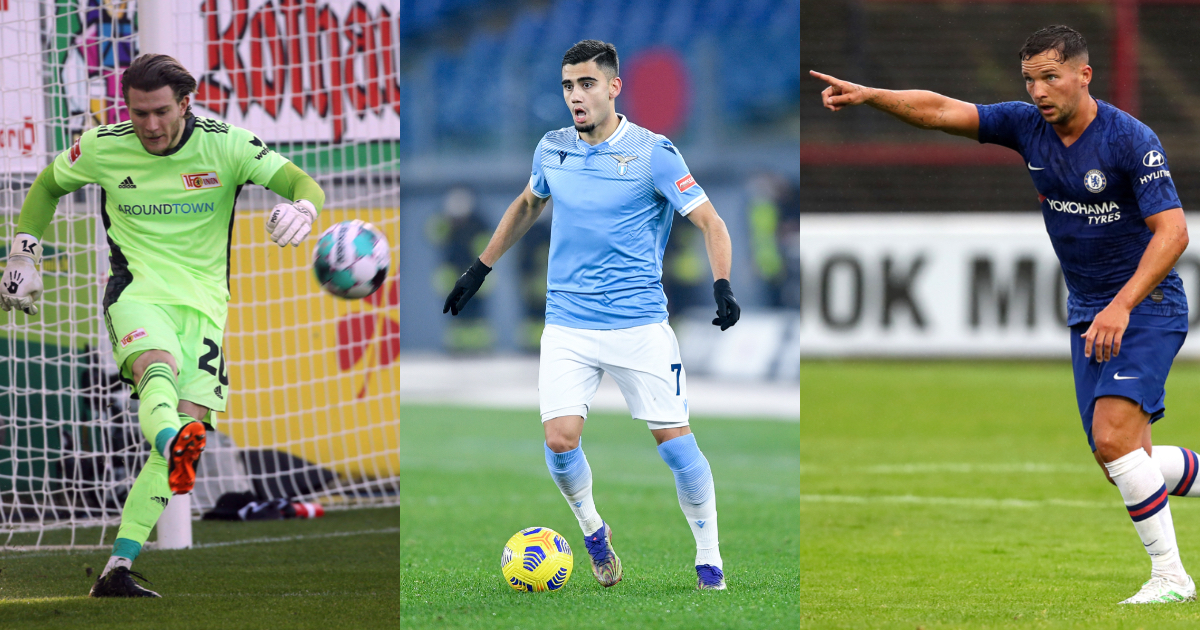 The majority of this XI will never play for their parent clubs again. These are the forgotten Premier League men. Max one per club.

Goalkeeper: Loris Karius
Karius reportedly wants to extend his Union Berlin loan rather than return to Liverpool for the last year of his contract – apparently the benches are more cushy in Germany.

He’s started just four games this term, with 34-year-old Andreas Luthe – who had never been No. 1 in the top flight before this season and was second fiddle to former Bristol City keeper Fabian Giefer at Augsburg – very much the first choice.

Right-back: Frederic Guilbert
Matty Cash has had an excellent first season in the Premier League. It means the return of Guilbert from Strasbourg would very much be as a back-up. But Villa do need one, with current deputy Ahmed Elmohamady expected to leave this summer when his contract comes to an end.

Guilbert’s done pretty well in Ligue Un since his January move, notching four assists and the winning goal against Monaco from right midfield, and he was far from terrible for Villa last season. Too good to sit on the bench; not good enough to start. There’s a few of those about.

Centre-back: Florian Lejeune
The former Manchester City player (yes, that’s right) helped to keep Alaves in La Liga this season. They did concede the most goals in the division (57), but that was still fewer than Newcastle (62).

Centre-back: Filip Benkovic
Signed at the same time as Caglar Soyuncu to cope with Harry Maguire’s imminent departure to Manchester United, Benkovic is yet to make a Premier League appearance for Leicester.

After a successful loan spell with Celtic, the Croatian made just one substitute appearance for Cardiff in the first half of this season and hasn’t featured for Belgian side Oud-Heverlee Leuven in the second half.

Brendan Rodgers was hardly brimming with sympathy when asked about the defender: “The whole idea was for him to play but I’m also a manager and if a player for whatever reason isn’t performing in games or training, and isn’t worthy of playing… I know the business we’re in.”

Left-back: Ryan Sessegnon
Sessegnon moved to Hoffenheim to play football and he’s done just that, starting 21 games for the German side, scoring two goals and providing three assists from both left-back and left midfield.

He says he’s “improved as a player and a person” and could well be a nice left-back middle ground on his return to Spurs, between the bonkers and the boring.

Central midfielder: Lucas Torreira
“I want to go to Boca Juniors now. Boca should reach an agreement with Arsenal for a one-year loan,” Torreira said, stamping his feet, last month.

The Uruguayan started just three La Liga games for Atletico Madrid this season and was taken off at half-time in two of them. By all accounts he wasn’t too pleased, until this week…

“I have to make it very clear that I was very happy at Atletico,” he said as he touched down in Montevideo with a title medal around his neck. Weird, that.

Mikel Arteta must be thoroughly looking forward to his return, along with the other midfield twerp.

Central midfielder: Danny Drinkwater
‘Why do we need another kitman?’ says Chelsea genius Timo Werner as Danny Drinkwater shuffles through the doors at Cobham in August. ‘Who? Drinkwater? What a funny name.’

*If you did not read the second bit in Werner’s accent, you are a better person than I am*

“I want to continue with Chelsea,” Drinkwater said *checks notes* last month(?!) “I feel like I have unfinished business with this club.”

The former title winner has started six games for Kasimpasa this season, who avoided relegation to the Turkish second tier by six points. Unless that “business” is admin-based or some sort of manual labour, it will remain very much unfinished.

Attacking midfielder: Felipe Anderson
Anderson played just 120 fewer minutes for West Ham this season than he did for Porto, despite leaving for Portugal in October. He started just one league game and only made the bench on 14 occasions.

It wasn’t entirely clear why Anderson left while the likes of Pablo Fornals, Manuel Lanzini and Andriy Yarmolenko stayed. But we now know better than to question the real manager of the season.

Attacking midfielder: Andreas Pereira
The Manchester United competition winner made 26 Serie A appearances to help Lazio into the Europa League this season. Although only three of those appearances have been from the start.

“‘If you’re struggling to take flight, make like the eagle, renew your wings.’ That’s one of the many things I’ve learned this season here at Lazio,” the footballer-cum-philosopher said in what MEN described as a ‘cryptic’ social media message. Nauseating, more like.

Attacking midfielder: Mohamed Elyounoussi
Ralph Hasenhuttl said £16million Elyounoussi had “a chance” of playing for Southampton next season after his brace against eventual Ligue Un winners Lille back in October.

And with 17 goals and eight assists in all competitions for Celtic, he should either be a useful addition to the Saints squad or fetch a decent fee should they move him on.

Striker: Cenk Tosun
Even in the sh*ttiest of all sh*t years, spare a thought for Cenk.

The Turkish striker missed the start of the season for Everton as he recovered from cruciate ligament surgery, then made five substitute appearances totalling 43 minutes before sealing a loan move to former club Besiktas. He spoke of his “delight” at returning “home”.

When he came out of quarantine in Turkey he scored a brace as a substitute in his first game before missing the next six through a combination of edema of the knee and coronavirus. Having come through that he notched a goal and an assist in his next two, before rupturing his patella and therefore missing out on Euro 2020. Won the title though. Every cloud and all that.