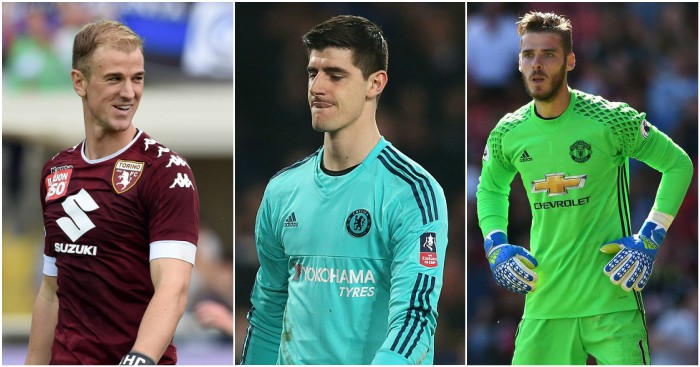 WE DID WARN YOU: DE GEA TO REAL MADRID IS BACK TO STAY
Oh boy. On Tuesday we brought news that the Daily Telegraph’s Matt Law had mentioned David de Gea’s name with regards to the Real Madrid goalkeeping situation. Now, two days later, he has become a splash on the back page of The Sun. This saga is back to stay.

The hard copy of The Sun credits Tony Little with the story, while the website labels it as an exclusive for Alec Shilton. The story claims that De Gea and Thibaut Courtois are ‘locked’ in a duel to be Real Madrid’s new goalkeeper, with both fancying the move. ‘Locked in a duel’ really isn’t a thing, is it?

Shilton/Little also says that De Gea would command a fee of £60m, while Courtois would cost £50m. It all just feels like rough estimation and guesswork, sorry.

ARSENAL WANT JOE HART
To the Daily Mail, and another goalkeeping situation. It looks more and more likely that Arsenal will thank Petr Cech for his service and shuffle him out of the door this summer. In truth, Cech has never quite had the impact many at Arsenal hoped.

The interesting line is that Arsenal are interested in signing Joe Hart from Manchester City for a fee of £15m. His career in Manchester is over barring an extraordinary turnaround, but Hart is currently on a contract worth £130,000 a week. Pep Guardiola will be understandably keen to shift him off the wage bill.

The question is whether City are happy to sell to a Premier League rival, with both Arsenal and Liverpool (though they have other options) now thought to be in the queue to sign him.

ERM, LIVERPOOL WANT GASTON RAMIREZ?
Yeah, this is a bit weird. It doesn’t really matter how Gaston Ramirez plays or what his attitude is, he always has admirers. Middlesbrough faced a battle to hold onto him in January, and reports in Italy say that Liverpool are interested in signing him.

Here is the full translation of TMW’s story, via your friend and ours Google Translate:

‘An idea for Liverpool’s attack. All eyes Middlesbrough at home for the summer. Like the profile of Gaston Ramirez, first informal contacts already left. Ramirez a name under consideration in Liverpool that we think and study the situation. England in the present and in the future of Ramirez, Liverpool’s called.’

AND THE REST
Emil Forsberg has signed a new long-term contract with Bundesliga title hopefuls RB Leipzig…Hull City rejected three bids from China for Abel Hernandez last month…Slaven Bilic will be offered a new deal at the end of the season if West Ham finish in the top eight…French champions Paris Saint-Germain have no interest in Manchester City striker Sergio Aguero…Adam Lallana will become the latest Liverpool player to commit his long-term future to the club by signing a new four-year contract…Borussia Monchengladbach want to keep promising Chelsea youngster Andreas Christensen – and are also poised to make a summer bid for midfielder Ruben Loftus-Cheek…Sergio Aguero feels he is not yet ready to return to Argentina and sign for boyhood club Independiente.