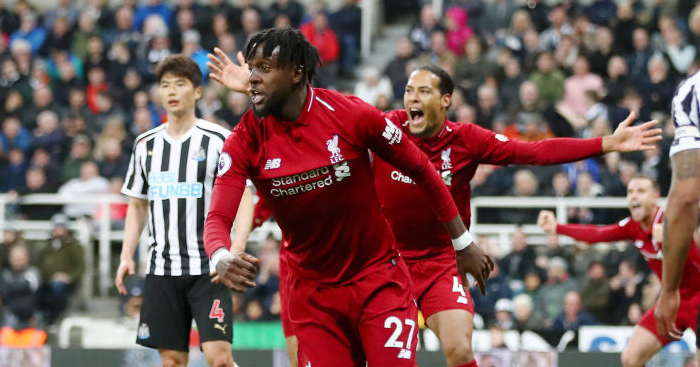 They have won games 5-0, 4-0, 3-0, 2-0, 1-0, 5-1, 4-3 and everywhere in between. They have beaten Arsenal, Chelsea, Manchester United and Tottenham. They have won at home to Paris Saint-Germain and away at Bayern Munich. Yet a victory against a team 14th in the Premier League table, closer to relegation than 7th in terms of points, is Liverpool’s most impressive single achievement of the season.

Jurgen Klopp denied that he had to “pick up players and give them a hug” following Wednesday’s crushing Champions League semi-final first-leg defeat to Barcelona, as if he doesn’t envelop them in a meaty embrace before, during and after each game. But it would only have been human for his squad to feel deflated.

To then return to a Premier League title race out of their control must have hurt. Liverpool could win 70% of their games in all competitions this season and still complete a remarkable trophyless campaign.

Four days after their Nou Camp collapse, Newcastle were one of the least desirable opponents possible. They had won six of their last seven Premier League home games, including a 2-1 victory over Manchester City in January. And with Rafael Benitez refusing to consummate this marriage, Liverpool’s task was mountainous.

But the biggest hurdle the visitors had to overcome was one of their own creation. It has been suggested that Dejan Lovren would ultimately decide who won the Premier League this season, and he was singularly determined to realise that fate at St James’ Park.

Picked ahead of both Joel Matip and Joe Gomez, the Croatian almost drowned under the weight of his own expectation on Saturday evening. He spread the sort of panic that even Virgil van Dijk could not alleviate, and Salomon Rondon was the shark that sensed blood in the water. His goal to equalise for the second time was a direct result of Lovren’s patent inability to deal with the particular threat posed by Christian Atsu on the run.

Klopp noted it, too. The German was furious with Lovren after the centre-half played a part in Newcastle’s first goal, his stray back pass finding its way to Ayoze Perez, Javier Manquillo, Matt Ritchie, Rondon, Trent Alexander-Arnold’s elbow then Atsu before settling in the net. It was a masterclass in how not to defend from one of the self-professed best.

His removal in the 84th minute was one born of mercy. And for all the criticism Klopp faced regarding his substitutions in midweek, they led directly to a victory that ensures Manchester City cannot celebrate a successful title defence until the final day at the earliest.

James Milner replaced Lovren, and soon instilled calm and control. The ineffective Georginio Wijnaldum made way for Xherdan Shaqiri, Divock Origi came on for Mohamed Salah after the Egyptian suffered a sickening injury, and the two bit-part players combined for a dramatic winner four minutes from time.

If City’s title challenge has been built on early goals, Liverpool’s has been forged from the exact opposite kind of fire. Southampton, Tottenham and Fulham were all vanquished with winners in the final ten minutes in March. Crystal Palace were beaten in stoppage time in January. Origi himself stunned Everton in December. There is plenty to be said about securing and maintaining an early lead, but that is clearly too boring for Klopp and his side. City burst out the blocks; Liverpool bust out their b*llocks.

They might still win the title. They might somehow overcome Barca to reach the Champions League final. And there is every chance they miss out on both prizes in the most glorious blaze imaginable. But those who questioned their character at the turn of the year looked mightily silly and look downright foolish now.

‘The great bottle jobs of English football’ have won eight straight Premier League games, dropping six points since the start of February, keeping pace with one of the most dominant domestic forces football has ever seen. Liverpool, if they do miss out on the Premier and Champions League, should feel no shame in redefining failure.

And if they manage to end their trophy drought and keep Klopp from the clutches of Switzerland, this win will be their crowning achievement. The “f***ing mentality monsters” are living up to their manager’s moniker.

Against a backdrop of devastating defeat just four days prior, Salah being stretchered off, Roberto Firmino not even making the bench, the Benitez narrative, a belligerent Newcastle, a hostile, brilliant home support, and a Dejan Lovren, Liverpool prevailed. Quite how is anyone’s guess.