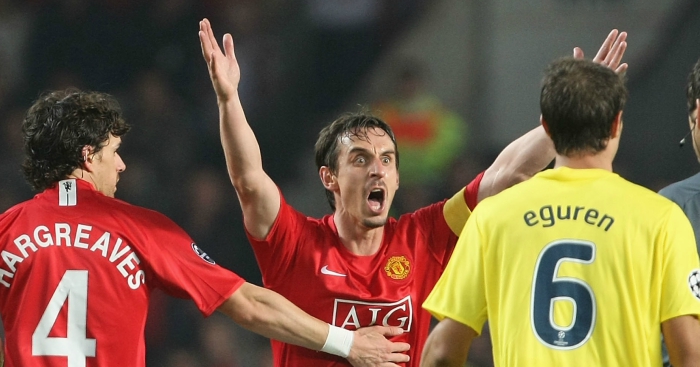 Gary Neville was left “absolutely fuming” by Arsenal as they were brushed aside by Liverpool on Sunday.

The Manchester United legend delivered a scathing verdict on the Gunners as Sky Sports’ co-commentator at Anfield.

Arsenal were ruthlessly dispatched on Merseyside, with Roberto Firmino, Sadio Mane, Mohamed Salah and Daniel Sturridge among the goals.

You absolutely should check out our 16 Conclusions from the game, but here are the highlights of Neville’s explosive co-commentary.

“I’m absolutely fuming watching them. It’s ridiculous some of the things you see from them.”

“I’d stick them all up on the transfer list. Some of these Arsenal players want a move. Who would buy them? None of them would get a better club than where they are now.”

“I’m not a Liverpool fan but this Arsenal team deserve a battering.”

“They (the Arsenal fans) must be livid. Liverpool are brilliant going forward but how can you play like this in a big game for so many of Arsenal’s players? Forget not turning up, forget not playing well but just the general attitude or lack of respect for the shirt from three or four of them in not running back and not bothering is disgraceful.”

“It’s a great club. I came here quite composed today and I’m actually fuming and angry and I don’t know how they [the travelling Arsenal supporters] feel. He [Arsene Wenger] must be livid.”

We’re with Nev on almost all of them. Almost. Because it sounds an awful lot like he is absolving Arsene Wenger of blame on that last one.

Still, listening to him get increasingly irate over a performance of a team he has no connection with was entertainment in itself.