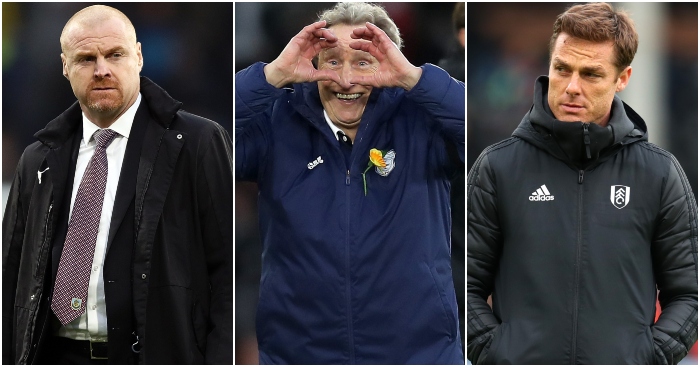 Do they have any hope?
Jan Siewert has toed the party line, insisting that while an escape remains a mathematical possibility, Town will retain hope. But the reality is they could be relegated as early as the end of their next game. If Huddersfield fail to win at Crystal Palace a week on Saturday while Burnley and Southampton beat both Wolves and Brighton respectively, then it will be curtains for Town before April has arrived.

With no sign of a fight, Town really are just waiting for the inevitable.

Can they at least score a few goals?
Town have scored the fewest goals in the Premier League, created the fewest big chances, and have taken the fewest percentage of their big chances. No player has scored more than three goals. Their output this season does suggest they should beat Derby’s Premier League record low of 20 goals in 2007-08 but they still need three more in seven games so it might be tight.

Karlan Grant arrived from Charlton in January and with three goals in six games he has scored more than Steve Mounie and Laurent Depoitre combined. The focus for the rest of the season is upon next season, and bedding the 21-year-old into this Town side to prepare for a promotion push.

Who stays, who goes?
Siewert has got his feet under the table at the John Smith’s Stadium now and decisions will be forming in his mind as to who he wishes to keep around for next season. Town have choices to make on eight players: six, including Jonas Lossl and Erik Durm are out of contract, while Jason Puncheon and Isaac Mbenza are approaching the end of their loan spells.

What are the chances of survival?
Fulham’s position is three points less perilous than Huddersfield’s, but Claudio Ranieri said a month ago that it would take “a miracle” to stay up. They have lost all four games since and remain 13 points off safety, with Manchester City due at Craven Cottage next.

Who will manage Fulham next season?
Scott Parker has lost the three games he has had in charge but there have been some signs of progression, especially in narrow home defeats to Chelsea and Liverpool and during the second half at Leicester. The former midfielder reckons there has been a “ten-fold improvement” in his players, simply by changing the focus solely from avoiding relegation to training hard every day. This management lark is easy.

Parker is popular but Fulham are assessing their options. Steve Clarke is thought to be in the frame and David Wagner has been mentioned, so too have the usual suspects like David Moyes and Chris Coleman. If Parker wants the job, then he could do with picking up a few points to supplement the supposed upturn in mood around the training ground.

Can they stop haemorrhaging goals?
The most obvious route to those points is plugging the leakiest defence in the top flight. If Fulham continue to concede at the same rate over the remaining seven games that they have through the first 31, then they will have shipped in 86 goals – only two fewer than Derby in 2007-08, the Premier League’s worst-ever defence.

Fulham have tried all manner of personnel in every conceivable defensive shape, but little has worked. On Sunday, it seemed that defending narrow might frustrate Liverpool, until Sergio Rico dropped another bollock and all the Cottagers’ good work was undone.

If Parker can tighten up the ropiest rearguard in the league, then that achievement alone might secure him the permanent job. With five of their eight remaining opponents in the bottom half, there are opportunities to demonstrate tangible improvement.

Tony Martial skipping through the Fulham defence like: pic.twitter.com/iddDH7baLE

Where will their points come from?
Cardiff have a game in hand over three of their four immediate relegation rivals but their fixture list is rather less favourable. The period between the transfer window closing and the current international break were viewed as critical to their survival hopes, but results have been so mixed – three wins, three defeats, including two thumpings at home – we are left no clearer over the Bluesbirds’ prospects.

Half of Cardiff’s eight remaining matches come against title and top-four contenders: Chelsea and Liverpool both come to south Wales, while Neil Warnock must take his side to Manchester twice, with the final day perhaps offering Ole Gunnar Solskjaer the chance to relegate his former employers.

Cardiff’s destiny will most likely be determined by trips to Burnley, Brighton and Fulham before their final home game of the season against Palace.

Have they got the stomach for a fight?
The home win over West Ham in their last outing could not have been better timed. Before a three-week break and after two desperately poor defeats at home to Watford and Everton, Warnock described the 2-0 triumph over the Hammers as “probably our biggest win of the season”.

It came when Cardiff’s character was being questioned. Amid the ongoing fall-out from the Emiliano Sala tragedy and rumours of Warnock’s players losing faith in their manager, the Bluebirds demonstrated the resilience it was thought they lacked after what the boss had described as their “worst week” of a season which has brought more misery than most.

Can their defence cope without its Sol?
One of the most pleasing aspects of that win over West Ham was a clean sheet achieved in their first match without Sol Bamba. The Cardiff centre-back, their most important defender, look set to miss the rest of the season due to a knee injury sustained at Wolves.

Bamba has missed only one other match this season – the 5-0 thrashing by Man City – after an ever-present campaign in the Championship last term. In his absence, it was a hugely-encouraging shut-out for Sean Morrison and Bruno Manga, with the former having been off-colour since returning from an appendix operation.

As Warnock said, without Bamba and any other alternatives, “the back four picks itself”. Presumably they have been a large focus of training during this mid-season break.

Cardiff defender Sol Bamba will miss the rest of the season.

How will Sean Dyche use the international break?
The Burnley boss said he will “reflect and make sense” of his side’s recent slump, though after the home defeat to Leicester, who played almost the whole game a man short, Dyche insisted his team “were not a million miles away”.

This terrible run has dragged the Clarets into the mire after it was presumed they would go on to secure safety following eight unbeaten at the start of the year. Dyche needs to identify the “details in both boxes” that he discussed after the Leicester game and implement some remedies, despite eight of his players being away on national duty.

Is another goalkeeping change really the answer?
Dyche has an abundance of goalkeepers at his disposal, and reports suggest he is considering using them all. Not at once, mind. There’s probably a rule against that sort of thing.

Tom Heaton earned an England recall on the back of his form since replacing Joe Hart, with Heaton’s return to the Burnley XI coinciding with the start of their eight-game unbeaten run. But four defeats and 11 conceded goals later, Heaton faces the prospect of returning from England duty next week to sit on Burnley’s bench again.

Dyche is apparently considering a recall for Nick Pope. Though the Clarets have the second-worst defensive record in the Premier League, little of that can be pinned on Heaton. It seems a change for change’s sake and perhaps highlights the struggle for answers over Burnley’s dip.

The race for the top four, er, heats up.

Can Burnley pick up enough points before their wretched run-in?
Whatever Dyche does, he needs to do it quick. Burnley’s next three games will probably go a long way to deciding their fate.

The Clarets host Wolves and go to Bournemouth before a six-pointer against Cardiff on April 13. Then, Dyche has a stinker of a run-in to negotiate, with trips to Everton and Chelsea, along with visits from Manchester City and Arsenal.

If Burnley are still in bother after the clash with Cardiff, then it will take a huge effort in the final month for last season’s seventh-placed finishers to preserve their Premier League status.

Will Saints seize upon their advantage?
If football was played on paper, Southampton would probably be safe already. Their run-in appears to be the simplest of the five down at the bottom, especially in the wake of the encouragement Ralph Hasenhuttl’s side will have taken from beating Tottenham and an extremely impressive performance before suffering a late defeat to Manchester United.

With a game in hand over Burnley, Huddersfield and Fulham, Saints only face one top-six side (Liverpool) in their final eight matches, while half of their run-in will take in meetings with sides currently in the bottom half of the table.

A month ago, Hasenhuttl set Saints an overly-cautious target of 40 points for survival. If they restart after the international break in the same form they showed going into it, it is entirely realistic that they can achieve that total. If they maintain their points-per-game haul under Hasenhuttl, Saints will beat it.

Seriously impressive turnaround from Southampton v. Tottenham. Ralph Hasenhuttl has to take a lot of the credit. #SaintsFC were so far off it in the 1st half. His tactical tweaks and Long, Sims coming on rattled Spurs. #THFC thought they had it in the bag. pic.twitter.com/gqil1oYRhD

Might complacency creep in?
Alternatively, that forgiving run-in could count against Southampton. “We have shown we can take points against the big teams but also lose points against the small teams,” Hasenhuttl himself said before the games against United and Spurs. That some pundits see St Mary’s as the place Liverpool slip up before the end of the season only strengthens the belief they are better at fighting Goliaths than fellow Davids.

The flip side to Saints’ impressive record against the big boys is the complacency it could encourage against the more routine opposition during the run in. Guard against that, and Saints are safe.

Can they finally achieve consistency?
Saints have shown great form in their last two matches, but it would be entirely typical of their season if they were to go to Brighton next week and get rolled over.

Since Hasenhuttl took over from Mark Hughes, they have won six games, lost six and drawn three. Under the Austrian, Saints have never won, drawn or lost more than two games in a row. With Jan Bednarek and James Ward-Prowse among the seven players Southampton have lost to international duty this week, the manager will pray they can retain their focus upon their return.