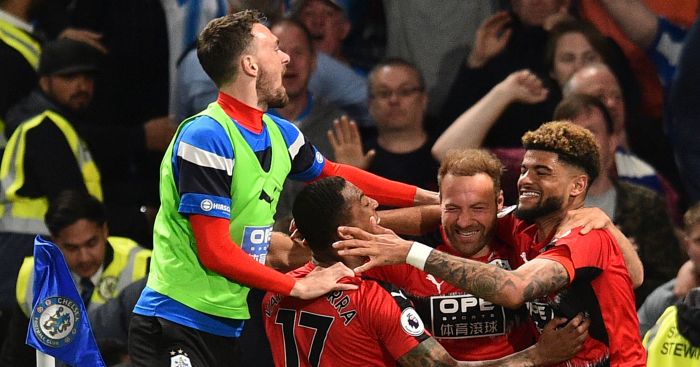 If you could pick two results to save your season, gritty draws away at the champions reigning and elect would probably be the perfect option. You’re never in a position of complacency or even confidence, but that only makes for a sweeter finish. They are staying up.

This is just reward for an away support who have endured difficult journeys to parts of England where West Yorkshire might as well be in a foreign country. This is just reward for those watching on back home, looking out for loved ones on the telly as they sing their hearts out for 90 minutes and more. The last three winners of the play-off final have been relegated, but not Huddersfield Town. They are staying up, and they’ll be humming that ditty until August.

When David Wagner was appointed manager of Huddersfield in November 2015, his initial brief was to keep the club from being relegated to League One. They were 18th in the Championship at the time. Having endured 11 straight seasons until 2012 outside English football’s top two tiers, back to the days of Delroy Facey and Kevin Gallen, Huddersfield took the plunge on Borussia Dortmund’s reserve team coach to help them survive.

Eighteen months later, one of Wagner’s protégés scored the winning penalty as Huddersfield Town returned to the top flight for the first time in 45 years. Christopher Schindler was magnificent in the Championship and he has been magnificent in the Premier League. At £1.5m in July 2016, Schindler was the club’s most expensive ever signing when they won promotion. That is astonishing in itself.

The finances are remarkable. It is estimated that Huddersfield will earn £170m out of their season in the sun, now rising to £290m with Premier League football confirmed next year too. In 2015, this club’s entire revenue was £10.4m. In the season Wagner was appointed, they had the fourth lowest wage bill in the Championship.

As Wagner is keen to stress, there are no secrets to this success and no magic either. His players have been asked to work harder and longer than they have ever worked before. The insistence from Wagner and his coaching staff is that application can account for a shortfall in finances and natural talent. You bet it can.

As his players dived in front of every shot and ran down every ball at Stamford Bridge, just as they had done at the Etihad three days earlier, Wagner’s point was proven. The entire second halves of both games were played like the last five minutes on repeat, attack vs defence with no respite.

There were individual heroes, because unexpected success inevitably crowns men as kings. Laurent Depoitre is nothing more than a jobbing striker, but his perseverance in hassling and harrying created the chance and goal that Huddersfield needed to cling to. Jonathan Hogg is a Football League midfielder by CV, but a Premier League stalwart by audition.

And then, when the layers of defence were finally broken, Jonas Lossl produced surely the best save of this Premier League season. On the eve of the game, Lossl spoke about following in the footsteps of that other great Premier League great goalkeeping Dane. Peter Schmeichel would have been proud of those strong fingertips.

The final minutes were agonising, a period of extended added time entirely provoked by the away team’s desperation to slow down the match. But when every throw-in, free-kick and clearance is treated like a goal, the full-time whistle felt like footballing Nirvana. Players celebrated for a few seconds before realising they had run out of energy. Down to the turf, with nothing left to give.

As I watched on as a near neutral, a lump appeared in my throat. It will have done in lounges and pubs across the land. That’s not just because I’m a soppy football romantic, who gets tearful at the sight of away supporters hugging men, women and children who they have never spoken to or even met, but spotted on train and coach journeys to far-flung Premier League stadia over the last nine months.

No, it’s because clubs like Huddersfield Town matter, and so does their success. It sends a message to umpteen middling clubs in the second and third tiers of English football that there is a light at the end of the tunnel, and that dreams really can come true.

It is usually said as a chilling warning of financial mismanagement, but not now: If it can happen to their club, it can happen to yours. Just find yourself a Dean Hoyle and a David Wagner, and don’t you ever stop believing.