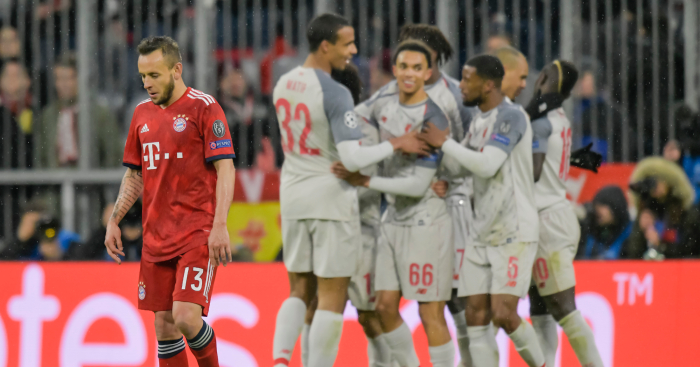 They were told that Bayern Munich do not lose at home in Europe, that Real Madrid were the last team to visit the Allianz Arena in the Champions League since December 2013 and leave with a victory. They were told that a first-leg draw was akin to a slender defeat, that they had played the ball directly into their opponent’s court. They were told that history, as it has for so long, counted against them.

Liverpool might have indulged in listening to those outside of their Anfield bubble under past regimes, but not now. The advice of Gary Neville will go unheeded; no sacrifice will be necessary. The Sam Allardyce criticism will go unnoticed; Jurgen Klopp hardly looked “flustered” by the final whistle. The premature post-mortem will be undone; a frustrating but forgivable first-leg made the second all the more worthwhile and satisfying.

Klopp has long made a point of blocking out the external noise. He keeps the newspaper industry at arm’s length, understanding both the positives and pitfalls of that particular relationship. He has derogatorily dismissed ‘pundits’ on numerous occasions. He once described his disregard for social media as “my smartest decision in life”.

But even he might treat himself to a flick through the back pages or a glance at Myspace or Bebo on Thursday morning. Liverpool did not even need to beat Bayern to advance to the Champions League quarter-finals, but that was hardly the point: they wanted to.

A 1-1 draw was enough, yet that would have been a whisper at a time when Liverpool were keen to release a statement. They ignored the safety net that was the away-goal rule and landed on their feet with a 3-1 win.

It was not a journey without its travails. Liverpool were particularly sloppy in the first half, Mane’s moment of majesty piercing a grey cloud of misplaced midfield passes and disjointed attacks. Their carelessness was summed up by an avoidable Joel Matip own goal made possible by mistakes from both Virgil van Dijk and Andy Robertson.

Yet Liverpool’s slew of errors were born not from fear, but complacency. They did not look overawed by the atmosphere, nor intimidated by a side that had last failed to reach the quarter-finals in 2011. If Liverpool ever came closing to exiting at this stage, it was because they developed an apparent obsession with shooting themselves in the foot. Bayern, thankfully, had loaded the gun with blanks.

Fabinho, on as an early substitute for the injured Jordan Henderson, faced a constant struggle to find a fellow grey shirt. Roberto Firmino could not keep the ball for longer than one or two seconds at a time. James Milner was a marathon runner out of his depth in this intermittent sprint of a game.

But Bayern capitalised only once, and even then needed a hand to do so. The perennial Bundesliga champions and current leaders seemed more unnerved in the supposed comfort of their own home than the intruders who had strolled through the unlocked front door.

The thought of Mohamed Salah suddenly finding form pinned first Rafinha and then David Alaba back. The prospect of Georginio Wijnaldum’s runs from deep curbed Thiago’s attacking intent. Trent Alexander-Arnold and Robertson were far below their usual standard, but their presence alone forced Franck Ribery and Serge Gnabry to think twice about pushing too far forward.

Each member of that aforementioned Liverpool quartet had games that ranged from good to average or poor, yet this team’s collective reputation now precedes them. Even the most gifted opponents now tend to veer on the side of defensive caution.

After half-time, and despite the onus being on the hosts to attack, the visitors were in control. Bayern were restricted to a single second-half shot that flew wide of Alisson’s goal, the Brazilian a contented spectator as first Van Dijk and then Mane secured a professional, disciplined win.

Klopp will not forget the first half, and nor should he. He has come to expect much better. But this win at a previously impenetrable European fortress, despite being nowhere near their best, perhaps proves that the mere idea of Liverpool has become as potent as the real thing.