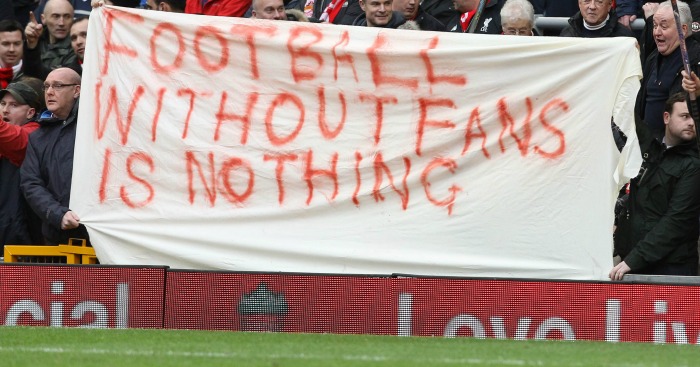 In amongst the naturally irked reaction to this, there’s also been a thread of rather world-weary types that have reacted along the lines of ‘Why is everyone surprised? Rich people keeping money for themselves! What a shocker! Boring, yawn yawn yawn, stop complaining.’ If you’re against this sort of thing – the squireling away of money by the wealthy so they don’t pay their fair share and thus have a detrimental effect on society as a whole – this seems like an infuriatingly defeatist attitude. Resignedly shrugging if a bigger boy nicks your sweets might be a sensible course of action in the school playground, but in grown-up, adult life you’d like to think people would kick up a little more of a fuss.

There does seem to be a similar attitude within football, the idea that the big are inevitably going to get bigger and the rich inevitably richer, they will control the game and engineer things to suit their own interests, whatever we do. We, the powerless proles, the anonymous fans whose loyalty is routinely exploited, cannot do anything because we essentially don’t matter, so what’s the point in protesting?

But we do matter. And there’s plenty of point in protesting. You won’t need the numerous examples from history where protesting has brought real, tangible results listing here, but even within football you don’t have to look particularly far back. When thousands of Liverpool’s fans walked out of their game against Sunderland in protest at ticket prices, it was easy to be cynical, and to assume the club’s owners wouldn’t give a single solitary sh*t. But a few days later John Henry, Ian Ayre and chums acquiesced and dropped their pricing proposals. While you could say that it was only a limited victory because ticket prices are still bloody expensive, the point is that the protest worked. You also have to assume that this protest was at least a factor in the league-wide decision to cap away tickets at £30, announced a couple of months later.

‘Crowds matter,’ wrote Liverpool fan Rob Gutmann in the Observer the next day. ‘People matter. Without fans it’s just 22 fools in a field. Even Jürgen Klopp has referenced this in the past…Today felt like a flag had been planted, and maybe things will never be the same again.’

Luckily, Liverpool fans aren’t the only ones with this attitude. You may or may not be familiar with the current fiasco at Charlton, whose owner Roland Duchatelet has taken a series of decisions that have led the team to the brink of relegation from the Championship, but more importantly to a point of dissatisfaction whereby fans feel utterly disconnected with the club that forms part of their identity. Players have been sold and replaced inadequately, barely competent managers have been appointed, briskly sacked and replaced with barely competent successors, and the chief executive – Katrien Meire, a 31-year-old lawyer with limited previous experience in football – at one point described fans as ‘weird’ and wondered why they didn’t react more like customers at a restaurant or cinema when dissatisfied.

Duchatelet hasn’t been to a game since October 2014 (he claims to watch on TV), and a few weeks ago released a statement that we’ll charitably describe as an ‘own goal’, which featured this populist gem: “Some individuals seem to want the club to fail. This is a confused approach, since following this logic leads to exactly the opposite of what we all want: staying in the Championship.” It would, of course, be the fault of some dissatisfied supporters if they dropped into League One, rather than the bloke who decides everything.

That was in reaction to a number of protests the fans have staged, including but not limited to simple demonstrations outside the Valley, a mock funeral for the club, a surprisingly not terrible song, the picketing of sponsors’ events and the stopping of their recent game against Birmingham City when thousands of stress balls were thrown onto the pitch. Much of this has been the work of CARD (the Coalition Against Roland Duchatelet), a group fans that have thus far raised an impressive £20,000 in three months to fund protests against the club’s ownership.

The protests have a number of aims, as Alan Davis, one of the CARD organising team, explains: “Some, like the beach balls and stress balls are designed to embarrass the club in front of a large audience and in the media, as well as involving a lot of fans in something tangible that they can do to express their opposition. Some, like the picketing of the sponsors day and commercial boycotts are more about inflicting financial, commercial and reputational damage. Some are just about causing operational grief to the club, often with attendant financial implications.”

These actions are undoubtedly causing disruption to the club, and various parties peripheral to it, but that’s the point: A protest that didn’t cause some discomfort, to their target and those related to the target, wouldn’t be especially useful. And when the alternative is just sitting back and watching a football club slowly die, the value of protest becomes clear.

But is it working? Davis seems to think so: “It certainly seems that we have caused some gaping cracks to appear – the Duchatelet rant about fans wanting the club to fail just a few days after a much more conciliatory statement (which directly caused the resignation of the club’s new Head of Communications after just 46 days); the absurd joint statement with the Met police about the criminality of throwing beach balls; now the unexpected 10 day holiday in Dubai being taken by the Chief Executive at a crucial stage of the season…We just hope that these cracks stretch right down to the foundations.”

Hopefully it works. Hopefully Charlton fans get their club back. And only partly for them: if they succeed, then it might inspire others to kick up a similar fuss in the name of their cause. Protesting is good, it’s important and it works. Hopefully those Charlton and Liverpool fans provide an example for everyone else to follow.