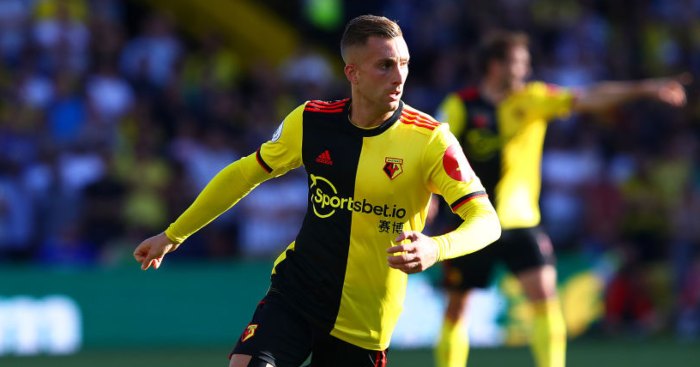 Sunday was the most perfect day in Hertfordshire. In the hours before kick-off at Vicarage Road, before the gates had opened and when the sprinklers were dancing and The Stone Roses’ optimism was hanging in the warm air, it seemed almost a shame that football had to happen.

It felt almost intrusive, as if the day was too still to be disturbed by all that bustling Premier League energy. The anger, the urgency, the desperation; no, this was really an afternoon to sit around and do nothing.

But Watford and Arsenal produced one of the most captivating games of the season so far. The visitors took that quick, two-goal lead at the end of the first half, then spent the entirety of the second trying to give away what they’d been given. It was English football as it likes to see itself, as it presents itself in the brochure. Punch and counter punch. All the players running towards physical oblivion.

And right at the contest’s heart was Gerard Deulofeu, who twisted and teased, who drove forward seemingly every time he touched the ball and who never lost faith in his ability to change the score.

Deulofeu is so flawed. He has never quite developed the instinct for when to release the ball. He can roast a defender on either side, he can pivot off both feet and he can finish extremely well. Rarely, though, does he do all three within the same passage of play. More often, his mind shuts the very doors that his ability opens.

On bad days, he can be maddening. His shoulders slump and he becomes a petulant pointless mess, running down blind alleys and carrying the ball nowhere. On Sunday, though, all of his attributes converged for good, driving the kind of performance that stays with people for months; in a Watford performance which was good, then bad, then very good again, he was the constant.

On reflection, perhaps the reason why he’s spent a career slowly descending from Barcelona’s level is because he’s never a true part of any team he plays for. Instead, he’s an extension of a side, a bundle of powerful, but disconnected attributes placed in a particular area of the pitch, hopefully in alignment with an opponent’s weakness. Sometimes it works, sometimes it doesn’t. At Watford on Sunday – under that hot sun, with Arsenal wilting and desperate for full-time – it very much did and Deulofeu would become the pulse of the game.

Truly exceptional players occupy that role all the time; they define the shape of a contest whenever they take the field. When Leo Messi receives the ball, tens of thousands of Camp Nou seats snap shut reflexively. For someone like Deulofeu though, whose talent is more nebulous and unpredictable, that kind energy – power –  has to grow during a game. He must reach a tipping point. He must beat enough defenders and do enough damage before he has the conviction to properly exert themself.

When that moment arrives, it’s with the realisation that that player must be given the ball at every opportunity. More importantly, everyone in the stadium – including the player himself – reaches that conclusion at exactly the same time.

Deulofeu played his way into that territory. He signalled his intent within 90 seconds of the game starting, when he roasted Matteo Guendouzi down the far touchline. Later in the half he forced an excellent save from Bernd Leno down to the goalkeeper’s left and, with one of the last kicks before the interval, weaved through the Arsenal box, before running out of space at the goal-line.

Eight minutes after the break, he would hassle Sokratis into the mistake which would change the game. For the 28 minutes between Tom Cleverley’s goal and Roberto Pereyra’s equaliser, he was so alive and so positive. Athletes rather tritely refer to that state as ‘being in the zone’. Hyperbole in this case, because Deulofeu wasn’t perfect, but he kept dosing the game with his optimism, always attacking with the ball, never just laying it off.

One of the advantages of Vicarage Road’s press box, at the back of the stand and tight to the pitch, is the perspective it gives on all the little duels within a game. With its perfect sightlines it must be an analyst’s dream. On Sunday, though, it gave all the right angles on Deulofeu’s repeated jabs at the Arsenal defence – not just a literal view of those knifing, out-to-in runs past defenders and towards the penalty box, but a vantage on the sensory ripples he sent through the crowd.

That’s what non-fans don’t realise about football crowds: they’re incredibly reactive. They are tribal and angry and all of the other clichés, too, but they have an amazing feel for danger. In their own half, obviously, when a botched clearance or a sprung winger can send fear rippling up the tiers. But also at the other end of the pitch, too, where the longer the game goes on, the more in tune the supporters become to what the opposition’s weaknesses are – which full-back can be attacked, which one of the centre-halves can be turned around, who might give away possession in a dangerous area if enough pressure is applied.

Deulofeu danced in that world on Sunday. He became incredibly engaging not just because of what he was doing with the ball at his feet, but through his ability to alter the mood. He would take a touch, then a second, then his shoulders would rise as he squared up his marker. It would send these enlivening jolts through the crowd and, by the time Anthony Taylor awarded Watford a penalty, they were charged to the point at which either a goal would have to come or the stadium would burst.

It’s such an interesting dynamic. Anyone who has ever been to a game will recognise it, of course, but it’s rarer than assumed. Call it a Talisman Effect, perhaps, or just a simple catalyst. Deulofeu had it and watching him swagger around, emboldened by that universal, thousands-strong belief in his ability to change the game was intoxicating as to watch as it was, presumably, for him to feel.

It’s even more intriguing when viewed in restrospect, from outside the confines of the game itself.. The mixed zone at the ground sits at the intersection between the dressing-room, the player’s lounge, and the main exit, where the away coach is parked at the end of the game. At the best of times they’re a showcase for how obnoxious some footballers are, but they’re interesting nonetheless, if only because they normalise what you have just seen.

Actually, you find yourself contemplating strange questions. What would it be like to contest a header with Player X? How small is Player Y? Do Player Z and I wear the same deodorant?

Out came Pierre-Emerick Aubameyang, looking like a superstar but talking graciously. Bernd Leno was impressive in a second language, making some smart observations. Mesut Ozil trundled out looking lost, Granit Xhaka pouted when he was asked to stop and, generally, Arsenal were in a very dark mood. Watford were more bouyant. Tom Cleverley spoke well, he just seemed happy to be playing again, and Abdoulaye Doucoure gave a lengthy interview to L’Equipe, while Roberto Pereyra chatted to his family in the background.

And there was Deulofeu, limping ever so slightly in a pair of flip-flops, shyly looking away from the journalists before disappearing quickly into the players’ lounge. Not long before, every pair of eyes in the stadium had been on him and he’d basked in that attention, weaponising it to produce an incendiary performance. Now, an hour later, he just wanted to slip away into Sunday night.