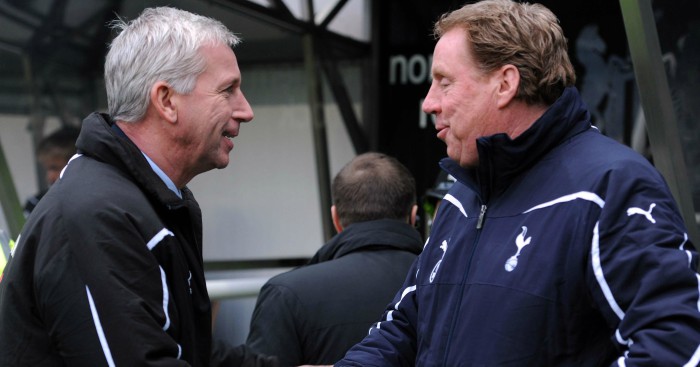 Alan Pardew – Newcastle to Crystal Palace, December 2014
Games in charge of Palace 87; won 35; drew 13; lost 39; win ratio: 40.2 per cent.
Pardew clung on to his job for a lot longer than most Newcastle fans wished, though he would claim that a fair proportion of the Toon Army never took to him anyway. During the final match of the 2013/14 season, Pardew faced ‘arguably the worst personal abuse a Newcastle manager has had to endure at any game’, according to The Chronicle, but it was not until half-way through the following campaign that Pardew identified a convenient road out of Newcastle – one that led him back to Selhurst Park.

Pardew not only got Palace out of trouble, but he led the Eagles to 10th – their best finish in the Premier League era. An FA Cup final appearance partially compensated for finishing 15th in Pardew’s only full season in charge before he was axed after two years with the club back in the relegation mire having won just six of 36 matches in 2016.

The right move? No one would ever blame Pardew for leaving a club where he was loathed by many to join another where he was widely loved following his time there as a player. It started swimmingly, with Palace finishing 10th, which is exactly where he had left Newcastle, who dropped like a rock after his departure. They fell even further the following season when they were relegated, while Pardew was dancing – albeit prematurely – at Wembley with Palace.

Owen Coyle – Burnley to Bolton, January 2010
Games in charge of Bolton 126; won 42; drew 24; lost 60; win ratio: 33.3 per cent
Owen Coyle admits he was surprised by the ferocity of the reaction from Burnley fans after he left the club to join local rivals Bolton. The Scottish boss had ended Burnley’s 33-year exile from the top flight the previous campaign but only half a season into their first foray in the Premier League, Coyle was tempted to a club where he had spent two-and-a-half years as a player.

“The best way to put it is that this [Bolton] is probably five or 10 years ahead of what we were trying to achieve at Burnley.” But Bolton’s descent from their time in the top six under Sam Allardyce was already in full motion.

The right move? Burnley were relegated after Coyle’s exit, but the manager had that same sinking feeling a couple of years later after a couple of 14th-placed finishes and a 5-0 spanking at the hands of Stoke in the FA Cup semi-final. Given the financial pressures upon the club, it would have taken a manager far more special than Coyle to reverse their slide. Perhaps he should have instead accepted an offer from Celtic in summer 2009 that would have “trebled or quadrupled” his salary.

Steve Bruce – Birmingham to Wigan, November 2007
Games in charge of Wigan 69; won 23; drew 17; lost 29; win ratio 38 per cent.
Steve Bruce had left Wigan after only seven games in charge in 2001 to take up an offer he couldn’t refuse at Crystal Palace. Six years later, he was back in the north-west after the Latics paid what was apparently a world-record compensation figure of around £3million to get him away from Birmingham, where Bruce claimed he had been “shafted” over a new contract.

Bruce kept Wigan in the Premier League that season before leading them to a highly-commendable 11th-placed finish in 2008-09. When Sunderland came calling at the end of the season, Bruce went with Dave Whelan’s best wishes: “What Steve has achieved here over the past 18 months has been magnificent,” he said, safe in the knowledge he’d got his money back on Bruce from the Black Cats.

The right move? Yup. Birmingham became a mess under Carson Yeung’s ownership and were relegated six months after Bruce left, while the ex-Man Utd defender took Wigan to their second-highest-ever finish.

Harry Redknapp – Portsmouth to Tottenham, October 2008
Games in charge of Tottenham 198; won 98; drew 48; lost 52; win ratio: 49.5 per cent
Harry walked out on Pompey for a second time in 2008, four years after deserting them for bitter rivals Southampton in 2004. But after returning to his ‘spiritual home’ just a year later, Redknapp guided Portsmouth to their highest league finishes in over half a century before bringing back the FA Cup to Fratton Park for the first time ever. In hindsight, though, at what cost?

Spurs paid Pompey £5million to take Redknapp in October 2008 when, as you may have heard, they had two points from eight games under Juande Ramos. Ten points from the first 12 available had Spurs climbing up the table, in which they eventually finished eighth.

Redknapp built upon that positive start by leading Tottenham to a couple of top-four finishes, a fifth place, and the Champions League quarter-final. His success led Redknapp to court the England job, which p*ssed off Daniel Levy, especially when Spurs failed to secure another season in the Champions League following a poor finish to the season.

The right move? Redknapp certainly jumped the Pompey ship at the right time and it is hard to argue with his record at Spurs. That was as good as it got for Harry, though. Roy Hodgson got the England job and Redknapp was in the Championship with QPR a year later.

Graeme Souness – Blackburn to Newcastle, September 2004
Games in charge of Newcastle 77; Won 32; Drew: 17; Lost 28. Win ratio: 41.5 per cent
Replacing Sir Bobby Robson was almost an impossible job, even though Robson was sacked due to Newcastle’s poor form at the start of the 2004/05 season, with no wins in their first four games leading to the slaughter of Bambi. The Toon dressing-room was apparently becoming gradually tougher to control and disciplinarian Souness was seen as the right man for the job, despite being a 33/1 outsider on the morning it was announced that compensation with Rovers had been agreed.

“I think I’m ready for a big challenge, and they don’t come much bigger than this,” said Souness. Indeed. Newcastle had finished fifth the previous season under Sir Bobby and despite a 10-match unbeaten run at the start of his tenure, Souness could not stop the rot. He fell out with a number of players, most notably Craig Bellamy, while other stars like Kieron Dyer and Lee Bowyer just fell out with each other. A year and a half after he arrived, Souness was gone, with Newcastle languishing six points off the drop zone and falling fast.

The right move? In Souness’s own words: No.

“I definitely regret leaving Blackburn.” he told the Lancashire Telegraph in 2013. “I had four of my happiest years in management at Blackburn and I do think now it was a mistake to leave. Newcastle had gone almost 50 years without winning a major trophy in England and like many people before me and after me, I thought I could be the one who could win that trophy. My time at Newcastle soured my experience of management.”