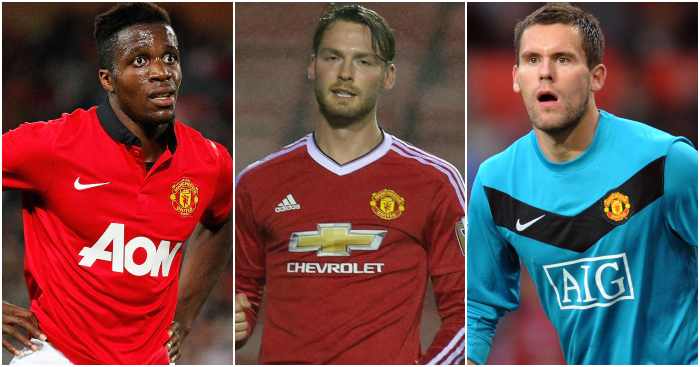 Kellett thought the whole thing was wind-up and even his dad struggled to believe that Manchester United wanted his son. The 21-year-old was under the impression he was heading back to Plymouth on loan, having spent the first half of the season with the League Two side, but Bolton boss Neil Lennon broke the news of United’s interest late on deadline day: “I said: ‘Sorry, Andy, you’re not going to Plymouth, you’re going to Man Utd. He rang his dad, who had to sit down for a while to take it all in.”

By that time, Kellett has made just one Championship appearance for Bolton, which came in a 4-2 defeat to Rotherham and he was substituted in the 51st minute. Those looking for some logic in the fairytale suggested Kellett was only going to Old Trafford to boost the Under-21 ranks after Saidy Janko was dispatched to Bolton in return, but Lennon insisted that United’s admiration was genuine.

“I know Warren Joyce likes him a lot. It is an opportunity of a lifetime for Andy. We are sorry to lose him but it is a fantastic opportunity for him and there may be a sell-on if either side decides to make it permanent.”

That did not happen. Kellett managed nine appearances for Joyce’s Under-21s before returning to Bolton, who promptly sold him to Wigan. Since then, the now-25-year-old has played for Chesterfield and Notts County, who were relegated from the Football League.

Wilfried Zaha (Crystal Palace)
Poor Wilf. The Palace winger signed for Sir Alex Ferguson, but waiting for him on his first day at Old Trafford in 2013 was David Moyes.

United agreed a deal worth £10million with an additional £5million due in add-ons in January 2013 while Ferguson’s team were steamrollering their way to their 20th and last Premier League title. Zaha, then 20, returned to Palace on loan until the end of the season.

“We like to sign players with potential,” Ferguson said upon the confirmation of signing Zaha. “We develop players and that’s been proven many times. Hopefully the boy enjoys it here.”

He did not. Zaha managed just two Premier League appearances in a United shirt and last year, he explained his ordeal.

“I went through so much with United, with England,” he told Shortlist. “There were rumours that the reason I wasn’t playing for United was because I slept with David Moyes’s daughter, and no one attempted to clear that up. So I was fighting my demons by myself, these rumours that I knew weren’t true.

“I was dealing with this at 19; living in Manchester by myself, nowhere near anyone else, because the club had a hold over where I lived. They hadn’t given me a car, like every other player. Nothing. I’m living in this hell by myself, away from my family, and I thought: ‘If this doesn’t make me stronger, what will?’ I had money but I was still so down and depressed.”

Moyes continues on Zaha: "The boy needs to keep his development going. If he can get games at Cardiff, we'll see exactly where he is." #mufc

After a loan spell at Cardiff under Ole Gunnar Solskjaer, Zaha returned to Palace for £3million rising to £6million. Now they want £100million for him.

Reece James (Preston)
The defender wasn’t good enough for Preston boss Graham Westley but United were more willing to give James a chance. After he had spent two seasons in the reserve team at Old Trafford, Van Gaal took a shine to the left-back upon taking over and ‘our friend’ James travelled on the first-team’s tour to USA.

“Reece James is the name on every United fan’s lips after impressing against Roma just days after a dream debut which saw him score twice in the 7-0 thrashing of LA Galaxy,” wrote the Manchester Evening News after some encouraging performances in pre-season. But when his first competitive chance came, James blew it.

He wasn’t the only one. The infamous 4-0 League Cup defeat to MK Dons did for a few of Van Gaal’s XI that night.

James explained: “The MK Dons game killed me and I can only fault myself for that. I didn’t impress on the night and it was a bad result.

“It was difficult though. A few of us had been chucked in and it was a squad that had never played together against a team that was really up for it, a good technical side. You look at some of the players they had – Benik Afobe, Dele Alli – and you have to say they are not bad.

“It was just one of those nights where a mistake leads to the first goal and then you go under a little bit. We needed leaders to pull us through and it didn’t happen.”

Some things haven’t changed at Old Trafford since, but James wasn’t kept around to find out. He first moved to Wigan for £200,000 before joining Sunderland last summer.

Many things will be said about football this year, but "Our Friend Reece James" is already the best one. #mufc

Nick Powell (Crewe)
“He has a great temperament, is two-footed and quick. He is a good physical specimen and has terrific vision. We hope Powell fills Paul Scholes’ boots.”

Those were Ferguson’s words after signing Powell in 2012 for £6million, with Crewe boss Dario Gradi claiming that the United boss had only watched the youngster once and even then, he didn’t play particularly well.

Powell scored on his first Premier League appearance but there, against Wigan in September 2012, his United career peaked. Injuries disrupted his progress and Fergie’s successor Moyes sent him to the DW Stadium on loan. Upon his return, for Van Gaal, Powell played in THAT 4-0 defeat at MK Dons before failing to come to the Dutchman’s rescue when bafflingly dispatched from the bench with United heading out of the Champions League at Wolfsburg.

'Nick Powell: What the actual f**k?' is the first of five questions for Louis van Gaal. Rooney and Young feature too https://t.co/DkfNPsfvZy

Powell came off Van Gaal’s bench again the following weekend in a 2-1 defeat at Bournemouth, by which time the Dutchman had seen enough. After four years, nine matches and just that single goal, he was released in 2016 when he returned to Wigan.

Gradi later pinned the blame for Powell’s failure on Ferguson’s retirement: “Alex put Nick in the team, and in fact if Alex had stayed who knows?”

Ben Foster (Stoke)
The former England goalkeeper never actually made an appearance for Stoke. It was during a loan spell – one of five for Foster during his Potters career – at Wrexham that Ferguson spotted the then-22-year-old while he was watching son Darren in the FA Trophy Final. A couple of months and around £1million later, Foster was a United player.

He was immediately dispatched to Watford for a season, where Aidy Boothroyd was so impressed, he temporarily lost his mind: “He’s better than Edwin van der Sar in my opinion. He is going to be the best keeper in the world, I’m convinced of that.”

After two seasons at Vicarage Road, Foster returned to Old Trafford but two injury-hit seasons checked the keeper’s progress. It was only after penalty shoot-out heroics in the 2009 League Cup final and a new contract that Foster felt in a position to challenge Van der Sar, but some crucial mistakes saw him slip to third choice rather than become No.1.

A couple of those errors came in the derby against City when Michael Owen dug him and Rio Ferdinand out of a hole. But Ferguson didn’t spare Foster.

“That was the end of my career there, really,” Foster reflected years later. “The manager has absolutely gone at me, so I knew then I wasn’t playing again. That was horrible.

“It was a few four-letter words. ‘That’s you. You’re done’. Then there is some more and you are like, ‘Oh s***, it’s still coming’. I was not great at dealing with that back then and it was horrible but then you learn from it and realise it’s brilliant.”

Foster made a success of his career out of the Old Trafford spotlight and the Watford stopper willingly admits “it was definitely the wrong place at the wrong time”.

“I was starting out with a young family, I had a toddler and a two-year-old. I’m a very family-orientated person anyway. With a team like Man Utd, they’re always in the latter stages of cup competitions so there’s a game every three or four days. You spend a lot of time travelling, in hotels. It just wasn’t for me.

“You can appreciate these players at the top level, what they have to go through. A lot is asked of them.”