Home F365 Features The latest on Marco Silva at Everton: Sacked ‘within hours’ 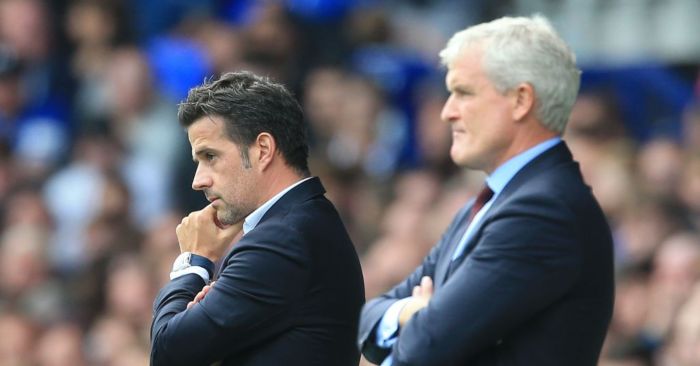 B*llocks. They were right all along.

When will he be sacked?
‘Within hours’, if The Sun are to be believed about something happening on Merseyside. Everton ‘are preparing to announce’ his sacking after majority shareholder Farhad Moshiri ‘accelerated the process’ in the aftermath of that stark Norwich defeat. The ‘danger of plunging towards relegation’ has provoked a reaction.

The Daily Mirror believe his ‘fate’ to be ‘sealed’. Moshiri is initially said to have wanted Silva to remain in charge for Everton’s next game against Leicester, but ‘the wider feeling within the club is there is no time to delay’. ‘The majority’ of the board feel his ‘departure is inevitable’.

The Guardian offer no time-frame but say the fan ‘hostility’ shown towards Silva on Saturday made it ‘extremely unlikely’ that the club will stand by their manager for too long.

But The Athletic say ‘there was still no real feeling behind the scenes that Silva’s dismissal was imminent on Saturday evening’. Who to believe?

Does he have any supporters in the club?
‘Supporter’ might be too strong a term, but The Athletic claim Moshiri ‘first earmarked’ and hired Silva, which ‘perhaps affords the Everton manager more leeway than some who preceded him’.

The i Paper offer a more general modicum of hope. They believe Silva’s chances of staying ‘are helped by the club’s traditional reluctance to shed managers’. Which is a weird line of thought for a club on its fifth permanent manager in six calendar years.

What else do we know?
A board meeting was held between Moshiri, chairman Bill Kenwright, chief executive Denise Barrett-Baxendale and director of football Marcel Brands on Saturday (The Athletic), but neither this nor the conversation Silva held with Moshiri were ‘an uncommon occurrence’.

The Athletic play heavily on the influence of Moshiri, who ‘has been known to act decisively at times’. They include an instance where ‘a call with one trusted advisor convinced [him] that he needed to hire a relegation firefighter in Allardyce’ in November 2017.

They also offer ‘some mitigation’ with the injuries to Jean-Philippe Gbamin, Fabian Delph and Bernard, as well as ‘the failure to sign long-term target Abdoulaye Doucoure’ this summer..

Over at the i Paper, the Toffees are said to be ‘concerned at what they see as a lack of viable, and realistic candidates currently available’.

According to the Sunday Times, Silva ‘has given his team two days off’ despite the Norwich defeat.

But The Sun say David Unsworth has ‘been told to take first-team training’, with his Under-23 side given the day off too. Is anyone at Everton working right now?

Who could replace him?
Which brings us neatly here. Pretty much every outlet is of the belief that David Moyes on a short-team deal of sorts is the most likely route Everton will take. And again, The Sun say that will come into effect on Monday with ‘a contract until the end of the season’ and ‘an option to extend for at least a further two years’.

Kenwright seems to be behind the idea of Moyes returning. The Scot ‘is seen as the perfect man’ to rescue Everton from their current mire, having done a similar job with West Ham a couple of seasons ago (Daily Mirror). Rather unsurprisingly, ‘he has already indicated he would love to go back to Goodison’.

If not Moyes, then who? The i Paper pitch then quickly dismiss the notion of Mauricio Pochettino taking over: he ‘is considered way out of Everton’s reach’. Rafael Benitez is ‘a more realistic candidate’ but only joined Dalian Yifang as manager in July. The cost of prising him away from China – and his past with Liverpool – likely rules him out.

Few other names are mentioned. But then The Guardian come crashing in and tell us that Mark Hughes has been ‘discussed…at boardroom level’ as a potential option.