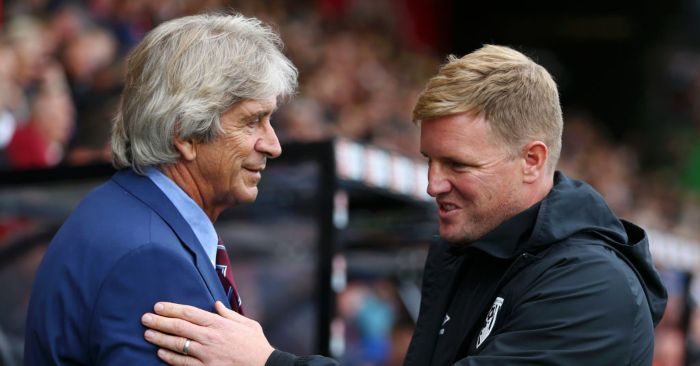 When will he be sacked?
If and when they drop into the relegation places, according to the Daily Mail. And that could happen with defeats away at Chelsea and Wolves in their next two games. That is what their headline suggests, but the story itself says the ‘growing concern’ at boardroom level is countered by a reluctance to make ‘snap decisions’.

The Daily Telegraph say a decision will have to be made if ‘there is not a significant improvement in the coming weeks’. They add that West Ham ‘prefer their managers to see out their contracts before making a change or, at least, leaving it until the end of a season so that the campaign can be reviewed before a decision is made’. Which sounds like literally every other club that has ever existed and not been owned by Glenn Tamplin.

No outlet offers a particular game or date that could decide Pellegrini’s future. The Guardian go as far as to say they ‘are prepared to act if there is no sign of Pellegrini improving’ a ‘situation’ that has caused great ‘alarm’ to those in charge.

Does he have any supporters in the club?
Not really. There is bluster about West Ham being ‘desperate for Pellegrini to succeed’ (Daily Telegraph), and that ‘there remains a will for the £10m-a-year Hammers boss – who has 18 months left on his contract – to come good and produce a return on the club’s investment in him’ (Daily Mirror). But it would be weird if they were desperate for him to fail and wanted him to continue being a waste of money.

What else do we know?
That whatever West Ham do with regards to their managerial position, they will target a goalkeeper in January. The Guardian say ‘there is a feeling that a new manager would struggle to make an instant impact if he has to use Roberto,’ so free agent Jordan Archer, recently released by Millwall, could join. The same story says Mario Husillos has ‘raised doubts’ over his own judgement after sanctioning the Roberto signing, as well as a number of others that have not gone to plan.

The club also ‘warned’ Pellegrini ‘that results must improve’ on Sunday. West Ham also ‘fear they are being dragged into a relegation battle’. Has Karren Brady finally taken a break from firing shots in her Sun column to look at the Premier League table?

Who could replace him?
The Guardian say West Ham ‘have started to identify potential replacements’. Chief among them is Rafael Benitez, who they ‘have long admired’ and who ‘has maintained a good relationship’ with co-owner David Sullivan. ‘Tentative overtures have been made’ with the Spaniard, but ‘financial imperatives will complicate any move’. He only took over at Dalian Yifang in July and is earning £12m a year in China, while Pellegrini would be due compensation with 18 months left on his contract.

Chris Hughton is another option. He ‘has admirers at the London Stadium’. Eddie Howe could be targeted while Sean Dyche ‘would be interested in speaking to the east London club’, presumably in a very gravelly voice.

Neither the Daily Mail nor the Daily Telegraph offer any actual names. The latter elaborate further: ‘the lack of a viable alternative to Pellegrini may also buy him more time’.

But the Daily Mirror go big. They say Chris Wilder is ‘in their crosshairs’, with Hughton and Benitez among the other possibilities. West Ham ‘are understood to favour a British head coach to turn their fortunes around’. A reminder that their five most recent managers, in reverse chronological order, were: Chilean, Scottish, Croatian, English, Israeli.

To continue that beautiful cycle, they are ‘even mulling over a return to David Moyes’. Good luck prying him from Everton’s cold, dead hands.