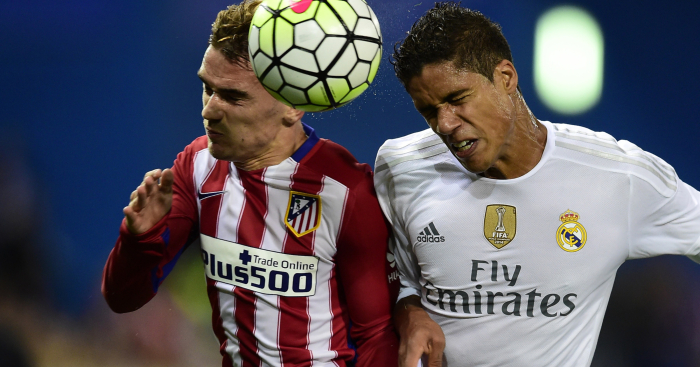 Jose Mourinho seems thoroughly fed up with his players and the United boss may well be regretting some of the near misses he’s had in the transfer market, especially while he plods on with central defenders he doesn’t trust.

It’s not as though he hasn’t tried to improve the squad in the transfer market. This is the XI he might have had…

Lee Grant
United have only ever needed a third-choice keeper during Mourinho’s reign because David De Gea is bloody brilliant and the manager knows it. So the only keeper to have been linked with United that wasn’t pure bullsh*t or an agent trying to screw a pay rise out of a client’s club is the man with the gloves.

Raphael Varane
There’s not a centre-back in Europe who Mourinho hasn’t allegedly coveted. But Varane seems to be the one he covets most, having worked with the France star at Real Madrid. Mourinho wanted Varane when he first arrived at Old Trafford, but the defender assessed his options and decided he was better off where he was. Odd.

“Of course it’s flattering, Manchester United are a very big club,” he said in September 2016. “I have always said I feel good in Madrid. It’s not easy to say ‘no’ to Jose Mourinho, but you have to weigh up the pros and the cons. We’re men, we have decisions to make and that’s how it is.”

Mats Hummels
When the Germany defender was seeking a new challenge away from Borussia Dortmund in 2016, Mourinho was keen to sell him the idea of joining United. One problem: the manager had just arrived at a club consigned to the Europa League for a year.

After opting for Bayern Munich, as most Dortmund players do, Hummels said: “There just was not that one English club where the overall package was fitting. The overall package means: a club which fascinates me; a club I have always wanted to join, and where the sporting constellation is right, and which of course plays Champions League football next season.

“And because of the latter one club was ruled out, and you can envision which club that was.”

Milan Skriniar
The Inter Milan centre-back was United’s defender du jour at the end of June, when it was reported that the Red Devils had submitted a £57million offer. Knowing all too well how hard Inter are to negotiate with, presumably it was submitted more in hope than expectation.

Fabio Capello spilled the beans over Mourinho’s interest in Skriniar as well as another Serie A-based stopper. “I met Mourinho during a meeting between managers last summer,” Capello told Sky Italia. “He wanted to sign two defenders. One was Milan Skriniar, the other one was Napoli’s Kalidou Koulibaly.”

Willian
The Chelsea winger would willingly do a job at wing-back, which is part of the reason Mourinho likes him so much. Almost since he walked through the door at Old Trafford, the manager has sought a reunion with the Brazil international.

United discussed a move this summer, a year after their initial approach. “There were a few conversations with my agent,” Willian said reflecting on the summer of 2017. “I worked with Mourinho and I became his friend as well. He likes me a lot and I like him a lot as a coach and as a person. He has put his trust in me and in my work, and I was very grateful to him.

“Manchester came to me, they talked with my agent, but nothing happened, because Chelsea would not negotiate me in any way and I’m very happy at Chelsea.”

Alex Sandro
United seemed to change their mind with every passing week during the summer over whether they wanted to sign a left-back or not. As it has turned out, Luke Shaw has been their best player this season, so perhaps that is the one thing they got right, most likely through luck rather than good judgement.

Sandro was the one name consistently linked with United since before the window opened. In the absence of anyone in the know, we refer you to Duncan Castles’ words from the Transfer Window podcast in July.

“This summer United have decided to go for Alex Sandro. They have put a deal in place with the player, the player wants it and Juventus are holding out for up to £53m. They have seen the market and are thinking they can cash in big time.”

N’Golo Kante
Mourinho was straight on Kante’s case when he took the United job. Unfortunately for him, and subsequently Paul Pogba – who would have loved his international team-mate to do his running on a twice-weekly basis – the then-Leicester star had opted to join Chelsea.

“It was amazing to have Mourinho call me, even though I’d been warned before how he would appeal to me,” Kante said in September 2016. “I listened to his arguments about why I should move to United, but at that time I was hesitant between staying at Leicester or leaving for Chelsea.

“My discussions with them were already well underway. But when I spoke, I had a good feeling with Conte.”

Renato Sanches
Mourinho admitted in September that he was too late to stop his countryman joining Bayern Munich in summer 2016, just after he had been appointed.

“I arrived late,” the United boss explained. “I signed in May, we started talking a week before, but completely out of the process. If I had arrived earlier, I’d fight for him. United watched Renato many times and maybe I did it even more. In so much time at home, I watched many Benfica and Portuguese league games, I got to know the boy better with time.”

Justin Kluivert
Mourinho pulled the young winger after United beat his Ajax side in the Europa League final in 2017 and since that chat, it was presumed that Kluivert would end up at Old Trafford.

He still might, but the teenager opted to take a smaller step to Roma first, after which he admitted that it was too soon to move to a club like United.  “I have heard the rumours but I haven’t spoken to Mourinho,” Kluivert told Algemeen Dagblad in May. “A move to Manchester United wouldn’t make sense, for now.”

His dad Patrick backed him up: “I think United would’ve been too big a jump. Roma are an important club, but he’ll face less pressure there.”

Ivan Perisic
Mourinho said this summer that “he didn’t know” why Perisic didn’t succumb to his advances last year. Reports suggested it was because United did not believe the winger was marketable enough to justify a £50million fee.

Mourinho on Perisic: “I don’t know why he didn’t come to Manchester when I wanted him.” #mufc [RT] pic.twitter.com/NpkZXe8Ywj

Antoine Griezmann
One player Woodward would have been delighted to spluff all his money on was the Atletico forward. It seemed like a deal was on until suddenly it was not.

Atletico were given a transfer ban in summer 2017 which changed everything. Reports at the time suggested Griezmann called Mourinho to say that he could not leave Atletico in those circumstances and the Franbc star has since confirmed his motives for staying.

“I have stayed mainly because of the transfer ban,” he told FourFourTwo. “Atletico needed me now more than ever and I felt I had to stay. It would be dirty to leave. I wouldn’t have been myself, or the person that I feel I am today, if I had left this club in that way.”

Which painted Griezmann as a good egg. Until that horrendous ‘The Decision’ farce.