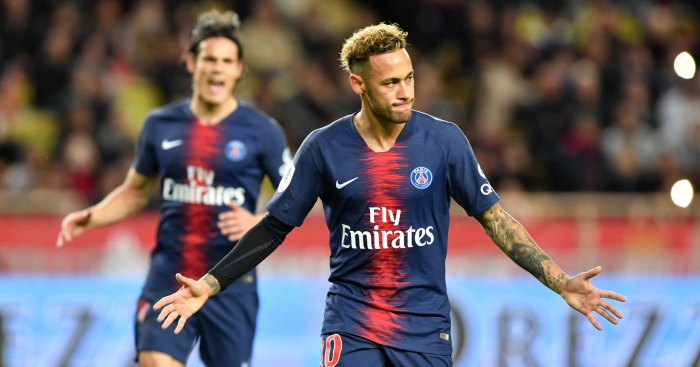 It was not Paris Saint-Germain’s four unanswered goals that emphasised the gulf in class, but their bench. As Neymar celebrated his tenth league goal of the season on Sunday evening – a penalty against Monaco – PSG’s substitutes rose as one to celebrate for the fourth time that evening. At times such as these, repetitive strain injuries are the greatest danger to substitutes.

There was Gianluigi Buffon, the best goalkeeper in the world over the last decade. There was Thomas Meunier, one of the stand-out defenders at this summer’s World Cup. There was Marco Verratti, once touted as the next big thing in central midfielding and still highly regarded. There was Angel Di Maria, once the most expensive player ever signed by a British club. It would have been stronger, but Dani Alves and and Layvin Kurzawa were unavailable. You get the point.

Monaco never stood a chance, floored by injury crisis and in serious danger of relegation. They were PSG’s closest challengers last season, but even that description is a loose one. Both teams may as well have shaken hands on a 2-0 away win and saved themselves the effort. Welcome to Ligue 1’s title race, an eight-month exercise in learning things you already knew.

This season, PSG have won all 13 of their league games, boast a goal difference of +38 and have already built up a 13-point lead at the top of the table. PSG have played five of the other six teams in the top seven and beaten them by a scoreline of 16-1. That solitary goal was a last-minute consolation penalty for Lille at the beginning of this month.

If you would therefore expect the mood around the Parc des Princes to be one of smug satisfaction, that would be wide of the mark. Winning the league title is an expectation rather than ambition, and satisfying expectations does not get any billionaire owner hot under the collar. Nasser Al-Khelaifi wants continental recognition. That remains PSG’s bête noire.

The troubling trend for PSG is that their European performance is getting worse, not better. If former managers might remark upon their bad luck of the draw in landing elite opponents in early knockout rounds, the headline is this: the last three French clubs to reach the European Cup semi-finals are Lyon, Monaco and Nantes.

This season, PSG are in a spot of bother three months earlier than is customary. Lose at home to Liverpool in match-day five, and their Champions League campaign will almost certainly be over. A draw in the same game would likely mean that a Liverpool win at home to Napoli would also send PSG out, thanks to Napoli scoring more away goals in the fixtures between the two sides.

There will be no sympathy for PSG should they again fall short, and nor should there be. Since Qatar Sports Investments bought the club in 2011 they have spent over £900m on transfer fees alone. The accusation in France is that they have signed attacking players for the name and brand rather than adding depth to the squad where it was really needed. There are also cliques within the squad – particularly among Brazilian players – that does not lend themselves to a ‘fight to the bitter end’ team spirit. All for one and one for…himself.

This was actually a relatively quiet summer in Paris, by recent standards. Buffon, Juan Bernat and Thilo Kehrer were high-profile arrivals, but selling Goncalo Guedes, Yuri Berchiche and Javier Pastore allowed PSG to actually make a profit on transfers. But look at talent migration across the rest of Ligue 1 to see the problem. Nice sold Jean Michel Seri and Alassane Plea. Montpellier sold Nordi Mukiele, Monaco sold virtually an entire team including Thomas Lemar and Fabinho, and Lyon sold Mariano Diaz. Nothing sums up Ligue 1’s issue more emphatically than Lille, currently in second place, selling one of their best young prospects to Brighton.

PSG’s most obvious problem is the inability to attract an elite manager to turn their elite individuals into an elite team. Neither Unai Emery nor Laurent Blanc quite fit that description, and nor too does Thomas Tuchel. The latter is already getting his excuses in early. “If we judge ourselves only by the biggest goal in European football, the possibility of a big disappointment is high,” he said in September. “Why should we do this?” Good luck with that; Emery was sacked for winning the domestic treble.

Tuchel's tactics are arrogant! They rely on individual brilliance in which even the way they play, you can see that they weren't well-instructed. No cohesive passing and position when the team has the ball, and Juan Bernat is shit tbh!

But this issue is merely a symptom of a disease that PSG created and are now afflicted with. They have scorched the notion of competition within Ligue 1 through a vast period of spending, and are feeling the positive and negative aftershocks. Which elite manager would risk his reputation on a job when a domestic treble is expectation and winning the Champions League the only way to gain goodwill?

The clanging irony is that PSG’s brilliance is also their undermining. Competition is a Goldilocks issue. Too much and it can sap away energy for European competition. The Premier League may well have leagues within leagues and a bigger glass ceiling than the Louvre, but within the top six there is competition for places. That has been touted as a reason for our underperformance over the last decade. The football is knackering and there’s too much of it.

But too little competition can kill you just as easily. PSG have become so used to walks in the Parc that they have become incapable of fighting toe-to-toe with Europe’s elite. Manchester City have Liverpool and Chelsea; Bayern Munich have Borussia Dortmund (although have suffered strands of the same problem); Juventus had Napoli last season; Barcelona, Real Madrid and Atletico Madrid all have each other; PSG have nobody, and it shows.

Eventually, money and power might break through the dam. PSG’s revenue is climbing year on year, with a strategy underway to further monetise the club’s logo and brand. Everything about PSG screams Champions League success – stadium, spending power, glamour, billionaire owners and state-of-the-art ambitions and standard. Money talks, and PSG are shouting.

But competition, the one ingredient money can’t buy, might just be the magic factor. PSG face Toulouse after the international break, and they will win handsomely. There is little intrigue and even less danger, but only by succeeding through adversity can a team truly steel itself. When adversity knocks infrequently on the door, PSG are ill-prepared to meet it.