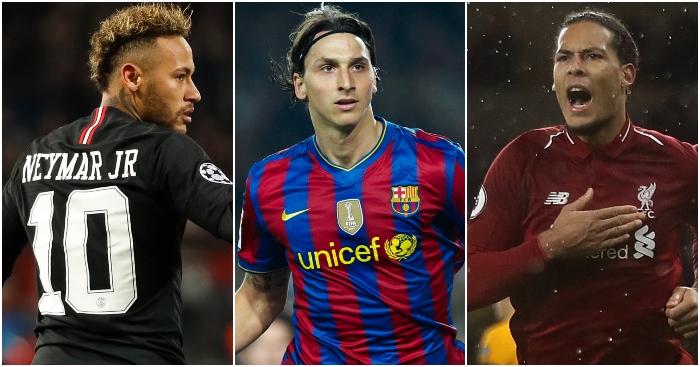 Belgium – Romelu Lukaku (Everton to Man Utd – £75million)
Is this the going rate for a substitute centre-forward now?

France – Kylian Mbappe (Monaco to PSG – £166.4million)
Stupid money but a sound investment, Mbappe will almost certainly go on to become one of the world’s best players – he’s not far off now and he only turned 20 a fortnight ago.

Croatia – Luka Modric (Tottenham to Real Madrid – £30million)
Remember when the Ballon d’Or winner was voted as the worst buy in La Liga in 2012? That was weird.

England – Raheem Sterling (Liverpool to Manchester City – £49million)
Give it 20 years, Sterling might not even be the most expensive player in his family…

Raheem Sterling's son is a baller, sign him up 💥

Portugal – Cristiano Ronaldo (Real Madrid to Juventus – £99.2million)
A bargain at £80million when he moved to Real, and seemingly a bargain now for Juve too.

Uruguay – Luis Suarez (Liverpool to Barcelona – £65million)
Just imagine if Arsenal hadn’t fannied about with their £40,000,001 bid in 2013 and instead bumped it up to £50million, they might have won the title by now. Luckily for Suarez, they didn’t and Barcelona did the job properly a year later.

Switzerland – Granit Xhaka (Borussia Monchengladbach to Arsenal – £33.8million)
Let’s just say the jury is still out on Xhaka because the 26-year-old has improved under Unai Emery and alongside Lucas Torreira. Until the summer, it seemed Arsenal paid a lot of money in 2016 for an erratic midfielder with a short fuse who can hit the ball really hard.

Spain – Kepa Arrizabalaga (Athletic Bilbao to Chelsea – £71.6million)
The Spanish stopper made the headlines in the summer when he became the world’s most expensive goalkeeper but we’ve heard virtually nothing of him since, which is a bit weird. While everyone fawns over Alisson, Arrizabalaga just cracks on. Probably no bad thing for a keeper.

Denmark – Jannik Vestergaard (Borussia Monchengladbach to Southampton – £18million)
The centre-back moved for an undisclosed fee said to be around £18million last summer at the same time Thomas Delaney joined Borussia Dortmund from Werder Bremen for 20million euros, which then was around £17.6million. The intricacies of deciding which was more expensive won’t matter if Christian Eriksen continues to stall on a new contract and leave Spurs.

Argentina – Gonzalo Higuain (Napoli to Juventus – £75.3million)
This record will be blown to pieces when Lionel Messi eventually joins Man City for a billion quid. Any day now…

Colombia – James Rodriguez (Monaco to Real Madrid – £71million)
The name is Bond, James Rodriguez, and he’s on our list. Ham-ez is actually the first and third most expensive Colombian signing, with both his moves to and from Monaco sandwiching Radamel Falcao’s move to Monaco and just ahead of Jackson Martinez’s jaunt to China. There’s not a lot of value for money to be found here.

Chile – Alexis Sanchez (Barcelona to Arsenal – £35million)
Before things got weird at Man Utd, Sanchez was brilliant for Arsenal prior to leaving in a similar-sized deal but the Gunners can’t take Henrikh Mkhitaryan to the bank.

Sweden – Zlatan Ibrahimovic (Inter Milan to Barcelona – £56million)
Zlatan’s biggest transfer was the one that didn’t really work out.

Germany – Mesut Ozil (Real Madrid to Arsenal – £42.4million)
Ozil can’t get in the Arsenal team at the moment but that doesn’t mean he wants to leave.

Mexico – Raul Jimenez (Atletico Madrid to Benfica – £18.7million)
The centre-forward could break his own record should he convince Wolves to trigger the £30million-plus option to buy permanently.

Italy – Jorginho (Napoli to Chelsea – £57million)
Like the great man himself, Gianluigi Buffon’s record couldn’t go on forever. Not when Chelsea were willing to blow Man City out of the water for Maurizio Sarri’s main man.

Poland – Grzegorz Krychowiak (Sevilla to Paris St Germain, £34million)
Robert Lewandowski might be better, but Krychowiak’s move to Paris makes him the most expensive, with ease. With Lewandowski unable to get away from Bayern and Poland’s golden generation past their best, this could last for a heck of a long time…

Austria – Marko Arnautovic (Stoke to West Ham – £20million)
It looked like dreadful business in 2017 when Arnautovic got off to a wretched start at West Ham. But then David Moyes replaced Slavan Bilic, the attacker began playing more centrally, and he started to look like a player again. Moyes, that.

Senegal – Sadio Mane (Southampton to Liverpool – £34million)
Liverpool made Sane the most expensive African player in history in 2016. Now he’s the sixth-most expensive. You know the priciest, we presume?

Romania – Adrian Mutu (Parma to Chelsea – £15.8million)
One of Roman Abramovic’s first big-money signings in August 2003 but Chelsea are still due to get their money back from the player after he was sacked a little more than a year later following a positive test for cocaine. Mutu lost his latest appeal in October having been told to pay Chelsea £15.2million.