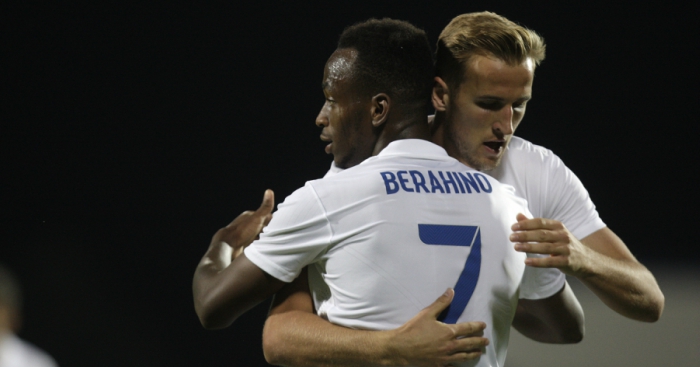 Angus Gunn (£10m, Manchester City to Southampton, 2018)
This time last year, this spot belonged to Jordan Pickford. It wasn’t even close, with the £25million Everton signing dwarfing the valuations of his peers. But it was not until November 2017 that he made his England debut.

Angus Gunn can only hope to travel down a similar path, having swapped life as a Manchester City loanee for a permanent new home at Southampton. If he activates the clauses that will see Saints spend the full £13.5m for his services, he will have done awfully well. It has already seen him climb plenty of rungs on our latest England ladder.

Kyle Naughton (£5m, Tottenham to Swansea, 2015)
Having not donned international colours since March 2011 during his time with the England Under-21s, it is safe to suggest that the senior ship has long sailed for Kyle Naughton. The 29-year-old was one of Swansea’s best players but will be tarred with the same brush as the under-achievers that steered them towards relegation. Graham Potter is likely to want to keep an ordinary but accomplished and experienced right-back, meaning he will be robbed of the opportunity to dislodge Kieran Trippier. Oh so close.

Curtis Davies (£9m, West Brom to Aston Villa, 2008)
Unless a move to a club based in the Russian city of St Petersburg becomes a possibility, the year 2008 was the undoubted zenit-h of the career of Curtis Davies. His loan move from West Brom to Aston Villa was made permanent for £9m, his middle name was still Eugene and he was named in two England squads. The centre-half was part of the first side Fabio Capello ever named, alongside such luminaries as Nicky Shorey, David Bentley and Gabriel Agbonlahor, but did not make the final cut. He got one step further in a friendly win over Germany nine months later, sharing a bench with fellow unused substitutes Jimmy Bullard and Michael Mancienne. Anyone else envious of our options a decade ago?

James Tomkins (£10m, West Ham to Crystal Palace, 2016)
Two English centre-halves made more tackles (47) last season. Two made more interceptions (63). Six made more clearances (213). Four ranked in the top seven of each statistic for English centre-halves, and of them, only James Tarkowski has been capped. Tomkins is joined by Lewis Dunk and Steve Cook in mourning the loss of Sam Allardyce as English manager. But he has his 37 England youth caps and two appearances for Great Britain to console him.

Tyrone Mings (£8m, Ipswich to Bournemouth, 2015)
Most promoted clubs sign a proven striker, while some use their new-found standing to persuade a relative unknown from Europe to make the leap. Others actively target a surprise, a major coup. But Bournemouth spent  the majority of their summer budget upon reaching the top flight on a left-back from the division they had just escaped from. In came Tyrone Mings for £8m, and out he went again when he suffered a serious knee injury that August. That rather slowed the momentum of a player who has never even represented his country at youth level. He does actually qualify to play for Barbados but “would rather play for England”, admitting in a 2013 interview that the prospect was “a long way off”.

Patrick Roberts (£12m, Fulham to Manchester City, 2015)
“Of course playing for England is a big thing for me,” said Patrick Roberts last September. “My family would love to see me do it and that’s the dream – to play for the senior team.” The winger had just returned to Celtic for another season-long loan, where he would gain another slew of Scottish trophies and even score in the Champions League. But a combination of injuries and an inability to break into the first team under Brendan Rodgers derailed any possible momentum that had been built. He is now back at Manchester City, and most certainly ripe for a loan.

James Maddison (£20m, Norwich to Leicester, 2018)
A season of change means that James Maddison is now the most expensive uncapped Englishman ever. The 21-year-old capped a wonderful campaign with Norwich by making the step up to Leicester last month, becoming the fifth signing of £20m or more in the Foxes’ history. “James is a wonderful player who is one of the most exciting young talents in English football,” said manager Claude Puel, and he will surely have registered on Gareth Southgate’s radar.

Sam Clucas (£15m, Hull to Swansea, 2017)
Like an expensive Leroy Fer, or a rich man’s Herman Hreidarsson, Sam Clucas has become the ‘must-have’ accessory for any Premier League club willing to unwittingly consign themselves to relegation. He scored three goals as Hull City finished 18th in 2016/17, joined Swansea City that summer and scored three for them as they finished 18th last campaign. Burnley are now in negotiations to sign a player who moved to Wales for an almost unfathomable £15m. It must have been that solitary England C cap that persuaded them.

Jordon Ibe (£15m, Liverpool to Bournemouth, 2016)
“He is someone we’ve been looking at,” said Roy Hodgson in September 2015, the manager deep into his hugely successful preparations for Euro 2016. He would add that Jordon Ibe came with a recommendation from Steven Gerrard, who “had the same feeling about Raheem Sterling”. The young winger had broken onto the Liverpool scene under Brendan Rodgers and featured regularly when Jurgen Klopp took the reins in October of that year, but he has only recently started to stand out from the Bournemouth crowd.

Andre Gray (£18m, Burnley to Watford, 2017)
So Harry Kane scored more Premier League goals last season. And so did Jamie Vardy. And Raheem Sterling. And Glenn Murray. And Wayne Rooney. And Ashley Barnes. And Dele Alli. And Callum Wilson. And Jesse Lingard. And Charlie Austin. And Jay Rodriguez. And Marcus Rashford. And Dwight Gayle. But Andre Gray did score one more goal than Chris Smalling. Watford spent a club-record fee on a striker who netted once every 299.8 minutes.

Saido Berahino (£12m, West Brom to Stoke, 2017)
There was a time when Saido Berahino was England’s Next Great Hope. He was regular teammates with Harry Kane for the England U21s, consistently outperforming a striker one week older than him. “The great thing with Saido is if he has had a little dip he is someone that recognises and acknowledges it and then does something about it,” said then-manager Gareth Southgate in September 2014. But Berahino and Kane’s paths have diverged drastically since. The former is in the midst of a 45-game, 2,455-minute goal drought; the latter has just won the World Cup Golden Boot. Kane has scored 101 times for club and country since Berahino last netted at first-team level in February 2016. Quite why Stoke decided to pay £12m to sign him in the middle of such a barren spell is anyone’s guess.