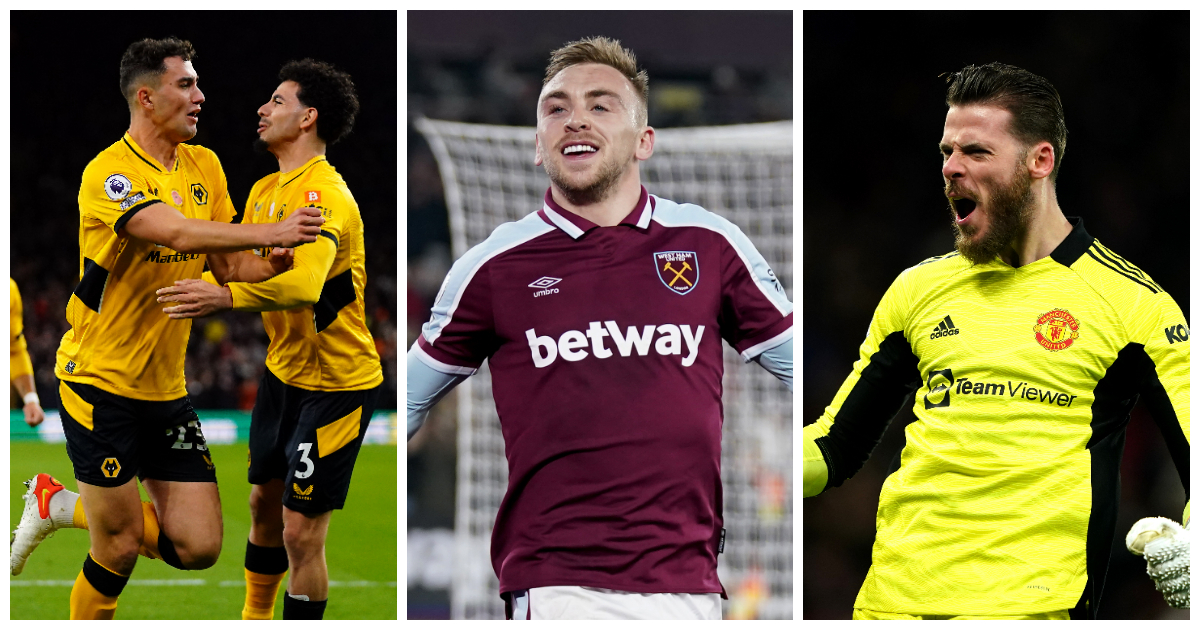 Goalkeeper: David De Gea (Manchester United)
The wearer of the No. 1 shirt at Old Trafford was a huge talking point last summer, but there is no longer any doubt with David De Gea rediscovering the form that once put him in the same bracket as Jan Oblak and Manuel Neuer. As a result, Dean Henderson’s future at Manchester United has been cast into doubt. It has been a difficult time for the 24-year-old, who had to back out of England’s Euro 2020 squad due to injury, can’t get a sniff under Ralf Rangnick and this week had to address some ‘hurtful and totally false’ rumours.

This season, Manchester United have been largely rubbish, but De Gea has been largely excellent. He lost his place in the starting XI last season after Henderson impressed after the Spaniard was handed special leave; he won’t lose his starting berth again as he currently leads the league in saves with 92, a statistic which reflects particularly badly on the players in front of him. Having said that, the experienced shot-stopper has been a bright spot in an otherwise disappointing campaign for United.

Right-back: Nelson Semedo (Wolves)
The player who, perhaps surprisingly, inspired this article, Nelson Semedo has looked a lot more assured and settled in the Premier League this season for Wolves. He struggled defensively after joining from Barcelona for a hefty fee believed to be in the region of £30m, but has definitely improved. He is a key reason why only Manchester City have conceded fewer goals than Wolves in the Premier League under new boss Bruno Lage.

Semedo is relatively high in tackling statistics this term, but as a wing-back, has to be confident and creative on the ball too. The Portugal international carries the ball into the final third 2.3 times a game and into the penalty area 0.73 times; he also attempts 2.69 dribbles per game. After being a weak spot for Wolves under Nuno Espirito Santo, Semedo is now a reliable wing-back who is living up to his hefty price tag.

Could Lionel Messi *actually* only do it at Barcelona?

Centre-half: Max Kilman (Wolves)
The second of three Wolves men in our back four (despite these players all operating in a back five), Max Kilman has played every single minute for the Midlands club this season.

Kilman has been at Molineux since 2018, joining from Maidenhead, but only began sporadically appearing for Wolves with any regularity last season. Lage clearly loves the 24-year-old – who was rewarded with a new long-term contract earlier this season – as he hasn’t missed a minute yet in 21/22, usurping the unfortunate Willy Boly, whose time at Molineux is likely coming to an end.

Kilman has definitely made a name for himself this campaign, and could potentially be in with a shout of making Gareth Southgate’s World Cup squad ahead of his team-mate and captain Conor Coady or Aston Villa’s Tyrone Mings.

Centre-half: Adam Webster (Brighton)
Adam Webster was superb last season, but it feels like he has elevated his game to another level, and is another centre-half knocking on Southgate’s door. Some Brighton fans might argue that he was just as impressive in 20/21, and it was a close call between him and Arsenal defender Gabriel, but Webster is now gaining the plaudits he deserves and if Ben White cost £50m, you’d expect the Seagulls hierarchy to demand a similar fee for the 27-year-old.

Webster has only played 14 times this season due to a couple of injuries, but it is no secret why Brighton offered him a five-year contract last August. He has captained Albion a couple of times in the absence of Lewis Dunk, and particularly excelled wearing the armband in the 1-1 home draw against Chelsea. Another defender who is comfortable on the ball and composed under pressure, Webster is the perfect Graham Potter player and is enjoying the best season of his career.

Left-back: Rayan Ait-Nouri (Wolves)
We just love Wolves and their vastly improved defence, can’t you tell? Rayan Ait-Nouri is a young player, so his inclusion is a slight cheat as you can debate that he is just developing. I wanted to include Jacob Ramsey as he has come on leaps and bounds since 20/21, but he is simply progressing and now excelling under Steven Gerrard. Ait-Nouri is slightly different as Ramsey has always been good, and has consistently improved, whereas Ait-Nouri looks an almost different player this season under Lage, who looks like a phenomenal defensive coach.

As per WhoScored, Ait-Nouri’s average match rating in the Premier League has shot up from 6.56 last season to 7.16 this term. He played 90 minutes as Wolves won at Tottenham on Sunday, and provided two assists in a 3-1 win over Southampton last month. He is an excellent attacking wing-back, but also incredible defensively. In the wing-back position, Ait-Nouri leads the league in tackles made per game (4.61), tackles won (2.57), pressures (23.03) and successful pressures (7.62). It is safe to say the 20-year-old is one of the most underrated players in the Premier League.

Central midfield: Joelinton (Newcastle)
Newcastle’s record signing Joelinton has looked pretty much hopeless during his whole time on Tyneside, until Ciaran Clark got sent off early on during November 1-1 draw against Norwich. The 25-year-old slotted into a more defensive role, and he was very impressive. Howe recognised his “tactical understanding”, “technical capabilities” and “incredible” work rate. Joelinton received lots of praise from pundits and fans following the match, and he has continued to impress in a box-to-box midfield role as Newcastle surge up the table.

It is probably for the best if Joelinton avoids the opposition penalty area, mind…

Another all-action display from Joelinton on Sunday! 🇧🇷 pic.twitter.com/cGsc0wkyaV

Central midfield: Said Benrahma (West Ham)
After just two games this season, Said Benrahma had scored two goals, which was one more than his 20/21 tally. He was signed from Brentford after emerging as one of the best players in the Championship but really struggled in his maiden season in the top flight. The Algeria international played 1392 Premier League minutes last season, and has already played 1522 this time around as West Ham fight for the Champions League places.

After a lightning-fast start to the season in which Benrahma provided four goal contributions in the first two games, the 26-year-old slowed down a little, but has still been very consistent throughout the whole campaign.

Central midfield: Bernardo Silva (Manchester City)
Bernardo Silva has never been poor for Man City, nor has he had a single poor season, but after Pep Guardiola gave him his blessing to leave last summer, the Portuguese playmaker has taken his game to another level and is in contention to be named the PFA Player of the Year for the first time in his illustrious career.

Silva was in and out of City’s starting XI for fun last season but he has been a constant this campaign. The 27-year-old has played the third-most minutes for the Citizens in 21/22, behind only goalkeeper Ederson (who doesn’t really count) and Joao Cancelo.

Jack Grealish was the king of progressive carries at Aston Villa, but has not been his true self under Guardiola. This is perhaps due to Silva, who leads the league (in his position) in progressive carries per game (10.65), carries into the penalty area (1.23) and is second in total carrying distance (320.10). How selfish.

Right-winger: Jarrod Bowen (West Ham)
Jarrod Bowen has been West Ham’s best player this season by a country mile, which says a lot considering how good Declan Rice has been in the middle of the park. England surely beckons.

The former Hull City man has gone up from an average rating of 6.75 to 7.35, whilst contributing to 16 league goals already, as opposed to his eight goals and five assists last term. If West Ham are to finish in the top four they will need Bowen to keep up his current form. An FA Cup triumph could also be on the cards, after the 25-year-old rescued the Hammers against non-league Kidderminster Harriers in the third round.

Striker: Diogo Jota (Liverpool)
Neal Maupay of Brighton and West Ham’s Michail Antonio were in contention for this spot, but Diogo Jota’s ridiculous form this season is too good to ignore, even though he has been consistently good for Jurgen Klopp since joining Liverpool from Wolves back in 2020.

Last season, Jota missed a large chunk of the season due to an injury, and boasted an impressive record of nine goals in 19 Premier League games, but the Portugal forward has shown that he can excel with or without star forwards Roberto Firmino, Mohamed Salah and Sadio Mane alongside him in Klopp’s front three. His average match rating (WhoScored) last season was 6.89, whereas in 21/22 he is averaging 7.24 in the league.

Only Salah (16) has scored more than Jota (12) in the Premier League this season and his ability to operate in dangerous positions in the penalty area is looking pretty much perfect for a forward as the 25-year-old enters his prime years.

Left-winger: Raheem Sterling (Manchester City)
Another world-class player to make this team, Raheem Sterling had a difficult spell at the start of the season following a terrific Euro 2020 with England in the summer. He wasn’t poor by any stretch of the imagination last season, but he has already matched his Premier League goal haul from 20/21, and on his current run of form, Sterling could hit 20 in the Premier League for only the second time in his career.

Starting consistently under the unpredictable Pep Guardiola is a huge achievement – predicting a City starting XI is as tricky as predicting the lottery numbers – yet Sterling has played 90 minutes in seven of his last ten league encounters after only doing so twice in his first 11 games.

The Premier League title beckons, but the Champions League is the big one for Pep and his players. They are quite rightly favourites to win both competitions, and with Sterling, Bernardo, Phil Foden, Joao Cancelo and Rodri in their current form, it is hard to look past the Citizens.