Home Mailbox The most obvious transfer of the summer… 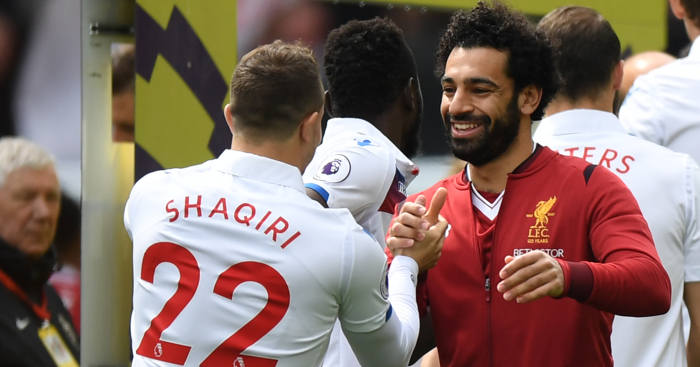 Keep your mails coming to theeditor@football365.com

It got me thinking, they need back up to their magic three. Is there a more obvious transfer than Shaqiri to Liverpool’s bench this summer?

He was magic doing that for Bayern.
Paul, NUFC

Nurse!
Oh, god.
I’m a 40-year Gooner, so the Arsene Wenger era has been like dancing through tulips, for me.
The past few years have been like coming out of an operation on morphine.
All good (grin).
But, the email by Bernard (I’d also love him at United but cant see that happening) MUFC was a big reality check.
To have a rival fan genuinely wanting to see you make the right managerial appointment and do well is the ultimate cut.
I hate you and everything your club stands for.
It kills me that you don’t feel the same way about me and mine.
But, Bernie is obviously a thoughtful and decent man.
His words, more than anything else I’ve seen written, made me realise how far we’ve fallen.
I will always love Arsene and was in tears watching the Burnley post-match ceremony.
But, the morphine is ebbing.
Next year, etc…
Nigel Brackets, NZ

Arsene told you so
I told you top four was better than a trophy.

Bielsa for Arsenal
To respond to Bernard about why nobody is suggesting Bielsa:

His Lille side this season were utterly shambolic and was he was unceremoniously canned.
His spell at Marseille – the most recent full job he managed – started well but fell away badly.
He stayed at Lazio for two days
I would argue that, sure, his Bilbao team were good. But, aside from that, his record is patchy at best. He won a couple of Argentine titles over twenty years ago. He didn’t win a major honour with Argentina and has no continental trophy on his CV. The hipsters do love him though.
Paul

…An interesting suggestion this morning that Marcelo Bielsa could take over at the Arsenal. In the past few years the Arsenal have had a tendency to start well, fall away and then finish strongly once the prospect of winning the league is beyond mathematical possibility. On the other hand, some of Bielsa’s recent teams have tended to play incredibly high-intensity football before the ar$e well and truly falls out of their season.

There’s also of course the fact that Bielsa’s style requires players to be superhumanly fit, which is perfect for a club with an injury record like the Arsenal. Could be fun though.
Ed Quoththeraven

Arsenal’s warning
What happened to René?

Recent mailbox entries re. the next Arsenal manager role are relatively split about Klopp’s brain, Buvac (I imagine an actual floating brain like in Futurama) and Rui Faria being the next Arsenal manager or someone more established like Allegri. Sarah Winterburn’s article hits the nail on the head, this isn’t a time for trying out someone’s assistant because he is cheaper or Klopp Mark II. I recall pundits and players alike raving about a certain René Meulensteen when he was first team coach at United. He moved to Anzhi, was promptly fired after 16 days and like any true “great”, repeated the trick at Fulham by getting the sack in ~ 4 months and is now having an Indian summer with Kerala in the Indian Super League and doing ‘ok’. Conclusion… some people are just better at being the bridesmaid than being a bride, so get me Allegri/ Simeone in a white dress now!
Sandeep (most gooners want Simeone anyway)

Lascelles at the Lane
Just a quick note that from a Spurs fans perspective – Jamal Lascelles was the best player on the pitch by quite a long way. Rose & Alderweireld will almost certainly be off in the summer & we can do no better than replace them with Ryan Sessegnon & Lascelles. Get our business done early – stay away from fringe squad players elsewhere (Moura / Llorente etc) and we really could challenge next year.
Steffan Trousers

Keown v Ozil
Sorry not having that.

Martin Keown was sold by George Graham for £200k to Aston Villa and bought back by the same manager for 10 times that amount – he remains the only Arsenal player Graham ever re-signed in his nine year tenure.

Keown was named in the best 11 Tony Adams ever played with and quite frankly we wouldn’t have gone unbeaten in 2004 if it wasn’t for him. His antics that day at Old Trafford galvanised the team to drive on unbeaten match after match – my invincibles shirt bears his name.

He may have been a bit part player for England but not for Arsenal – he was, is and always will be an Arsenal legend.

Ozil is a wonderful player but hasn’t achieved legendary status at the club yet.

That said, Martin’s attacks on Mesut do leave a bad taste in the mouth.
Graham Simons, Gooner, Norf London

…Fair play to Ozil’s agent but I also think Keown has a point too. As a fan of an opposing team to Arsenal, I love it when Ozil is selected against us (especially when playing at Anfield). You know he won’t put much effort in, won’t track runners, won’t do much at all really. Even Jordan Henderson has schooled him numerous times.

On another note, the agent criticises Keown for having an opinion when he ‘he wasn’t good enough’, then who is to say this agent is allowed an opinion on Keown when he’s never even played professional football?

Are any of us allowed an opinion?
Jimmy (When Ozil is your leader, you’re in trouble) Spain

…Dr. Erkut Sogut, that rant though!

Hes not exactly spot on regarding Keowns role in past Arsenal teams, but hes right when he says that Ozil should be judged on facts and not punditry opinion.

I for one love Ozil and don’t expect him to be smashing into people. It really does surprise me when pundits say he needs to add this to his play. It’s almost as if they need to pander to their redtop base with these calls for ‘pashun’ instead of actually having thoughtful opinions. I can’t for a second believe that someone who has played at the top level like Keown actually believes this stuff…right? Right??
Andrew

Sh*thouse Saints?
Given my ancestral origins on the south coast of England, I am friends with quite a large number of Southampton supporters, many of whom were taking social media this week breathing very public sighs of relief at the Swansea result, believing that their safety is pretty much secured for another season.

Now maybe I’m just looking for intrigue in the final weekend of the season where none really exists. It’s my wife’s birthday this weekend so I’ll be subjected to the pain of a family meal somewhere soul destroying like Nandos or Pizza Express and frankly the supposed excitement of the “race for fourth” just doesn’t offer the same level of distraction as the heart wrenching emotion of a relegation nailbiter.

But I’m looking at the table and to those Saints fans who are thinking ‘job done’ with a 3 pt and 9 GD cushion , I’d say that it ain’t necessarily so. Not when you realise the final day fixtures.

Saints play record-breaking champions Manchester City, while Swansea play bottom of the table, relegated Stoke City. Suddenly a 10 goal swing doesn’t seem *that* implausible. Stoke have nothing to play for, are rotten, and could easily capitulate to a 3 or 4 goal defeat. If Pep’s boys have their tails up, they’ve shown they can put 5 or 6 six past anyone. In fact, the less likely of those outcomes is that Swansea muster the goalscorers to take advantage of a truly awful Potters performance, but it might not take a lot.

Which got me wondering, in a week in which south Wales usurped the Death Star as the galactic home of the “dark arts”, what would happen if Saints forfeited the Man City game? It has been a while since this last happened in a high profile game, but doesn’t that get awarded as a default 3-0 victory to the opponents? That’s safer than the alternative, isn’t it? Surely you’d back yourself for safety knowing that Swansea had to beat anyone by a margin of at least six goals. What would Saints supporters think?

And wouldn’t it just be hilarious to see City round off their glorious, historic season with a 3-second football match in an empty stadium a la Scotland’s game in Estonia all those years ago. I bet Kevin de Bruyne would still somehow manage to get an assist in the match!

Fully expecting now to be told that I’ve done the maths all wrong.
Chris Bridgeman, Kingston upon Thames

Conte out
I’ll keep it short. Conte out, whether he wins the FA Cup or not. I dont think even Roman has the patience to sit through another season of such infuriating managerial decisions.
Paul (CFC) #wengerin. Lampard as assistant. That is all.

Raining on Town’s parade
Now I would like to caveat this entire post by stating that Huddersfield have overachieved this season and staying up is a remarkable achievement. However, whilst not having mass resources, they do have good top-down structure, a consistent philosophy and faith in a manager. As Burnley, Wigan, Stoke and Swansea have all proved in yester year, this can result in achievements far beyond the collective monetary value of the parts. This media love in is so cringey.

This overachievement is not a miracle. Leicester winning the league was a miracle, Huddersfield staying up is just an excellent case study for club management. Arguably, I would argue Sunderland staying up for as long as they did with woeful recruitment strategy and hire/fire merry-go-round was far more incredible than Huddersfield. Sunderland had lots of money but they wasted it on Jack Rodwell, Dibliobodji, Vergini, Toivonen, Joleon Lescott and Darron Gibson. Whilst the monetary value of the players was high the actual ability and suitability of these players was way off. Huddersfield on the other hand identified good players at great value. Jorgensen, Schindler, Depoitre and Lossl all came at low cost but highly suited to the job at hand. Look at Burnley signing Jeff Hendrick and Chris Wood or Swansea signing Scott Sinclair and Michel Vorm. Good club management often outweighs financial strength.

Even at Palace in 13/14 we managed to stay up – after coming 6th and winning the play-offs – with a lunatic transfer window, low financial resources and awful squad that was not ready for the top league. Over the summer we sold Zaha, signed Stephen Dobbie, Jose Campana, Jerome Thomas, Lewis Hunt, Elliot Grandin, Jimmy Kebe, Cameron Jerome and Florin Marange – who wasn’t even registered for the 25 man squad. These guys complimented a squad that included Peter Ramage, Danny Gabbidon, Stuart O’Keefe, Dean Moxey, Aaron Wilbraham, Owen Garvan and an ancient Kevin Phillips.

One win in our first 10 and Holloway was gone and in came Pulis. He signed Tom Ince, Joe Ledley, Scott Dann and Wayne Hennesey in Jan and we became a typical Pulis team and managed to finish 11th. That squad had no right to stay up, it was low in quality and we had only recently returned from the brink of financial ruin. What we did have was heart and Pulis developed that with his philosophy to make us hard to beat and work hard. No masterclass.

Prior to that we had been a yo-yo team so having more than one season in the top division was huge. It was made even more impressive by bad planning the summer before. Clubs overachieve every year. Some on meagre budgets, other on awful planning. Whilst it is an achievement for the club it is not one that deserves national fanfare unlike when they win a trophy or qualify for Europe. This is not a Burnley or Leicester scenario.
Joe, Midlands

You presume wrong…
I presume Sarah has bought tea and cakes for everyone in the F365 office today.
Donal Moriarty, Dublin