"Their side just looked like a bunch of random names." And yet Watford are making the mysterious successful. 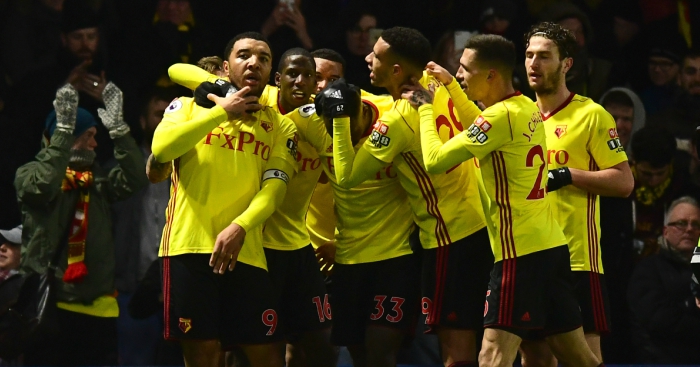 There are certain lines that lodge in the mind. Mrs Merton asking Debbie McGee “what first attracted you to the millionaire Paul Daniels?”; Vince Cable pointing out Gordon Brown’s “remarkable transformation from Stalin to Mr Bean”; Barry Chuckle screaming “I can’t help it, I’m nervous!” while making a knob joke with a cucumber during the Chuckle Brothers’ live performance of Indiana Chuckles and the Kingdom of the Mythical Sulk. All unforgettable for different reasons but with the common intention of grabbing attention. Sometimes, though, it can be a throwaway, private remark that sticks with you, as I discovered in the King Power Stadium’s press room 15 months ago.

It was December 10, 2016 and I was there, on behalf of The Guardian, to cover Leicester City versus Manchester City. I was joined by my colleague Paul Doyle and, prior to kick-off as we checked the Wi-Fi, did some research and scoffed the free grub on offer, we chatted about the match that had taken place earlier that day – Watford’s 3-2 victory over Everton at Vicarage Road. Paul had covered Watford recently and was commenting on how, having been handed the teamsheet, he struggled to figure out what their formation was and who was playing where. “Their side just looked like a bunch of random names.”

Paul was partly joking, of course, but there was an element of truth in what he was saying and, for me personally, a chord struck immediately.

In our line of work – national football writers without a specific patch – it can be difficult keeping on top of developments at every club you cover. You try your best and, in general, have a sense of what’s going on; how the team currently lines up; who the best and worst players are; what the general mood is around the manager. But there are certain clubs, often because of size, location or both, that can slip through the net. Step forward Watford Football Club.

Promoted to the Premier League in 2015, Watford have existed as a relative outlier within the rarefied atmosphere of England’s top-flight. Their ownership under the Pozzo family has seen eyebrows raised and heads scratched at a high-turnover transfer policy as well as with a bewildering change of managers that, with the appointment of Javi Gracia in January, has seen nine different men take charge of the team in less than six years. Outsiders have not known what to make of it all, with Watford’s status as a relatively small club located in the mild-mannered outpost that is Hertfordshire meaning many have not tried to either. Let them get on with it, whatever it is.

A level of unknowing has come to define Watford, seen no more starkly than in – and do allow me to use a completely made-up word here – the recognisability of their squad. Miguel Britos. Sebastian Prodl. Jose Holebas. Stefano Okaka. Christian Kabasele. Quite frankly, they sound like the type of made-up players you find on Pro Evolution Soccer and, as Doyle intimated, when listed out of formation it can become a confusing affair for someone who has not seen them. Who are these people? From which other Pozzo-owned club have they come? Is Younes Kaboul really still a thing?

The truth is that when you dig deeper, Watford are not drastically different to many of their competitors. Under somewhat mysterious, largely discreet foreign ownership? May I introduce you to Bournemouth, West Bromwich Albion and, heck, Chelsea. A squad mainly made up of imported players, many of whom are unheard of? Ladies and gentleman – West Ham United and Swansea City. An array of different managers over a relatively short space of time? Well…where do I start?

And while the majority of Watford’s squad may not be the most distinguished of figures, it would be wrong to dismiss them entirely as journeyman who arrived on these shores purely for a short-term financial fix. Britos, Prodl and Holebas have all been at Vicarage Road since July 2015 while Okaka and Kabasele are both in their second seasons. Elsewhere there is Etienne Capoue, a key figure in central midfield who also joined the club three summers ago, and Heurelho Gomes, currently out of the first-team but a loyal and popular servant having arrived from Tottenham way back in May 2014.

Then there is Watford’s homegrown core. Troy Deeney is captain and probably the club’s most well-known player. Adrian Mariappa, while a Jamaican international, is a Harrow-born youth product currently in his second spell at Vicarage Road, has become such a feature at first-team level that the defender made his 250th start for the club in last Saturday’s 1-0 win over West Brom.

Tom Cleverley, Andre Gray, Will Hughes and Nathaniel Chalobah are other English players getting first-team chances at Watford, with the latter two showing the club is also an environment where young, potential-rich talent can thrive. Chalobah arrived in the summer having accepted he was never going to get a proper look-in at Chelsea and shone immediately having being thrown in against Liverpool on the opening day of the season. He caught Gareth Southgate’s eye and may genuinely have been a contender for England’s World Cup squad were it not for the fractured kneecap the 23-year-old sustained in training. He has been out of action since mid-September.

There is, then, firm evidence of longevity and long-term planning at Watford that may not be immediately obvious to casual observers, who may also be under a false impression that since the arrival of the Pozzos in 2012 and Watford’s subsequent tie-up into a ownership network that includes Udinese in Italy and Grenada in Spain, the club has lost its links to its past and local community – that its identity has been eroded.

Yet you only have to go back to how the club responded to Graham Taylor’s death 14 months ago to see how much former heroes are cherished at Watford. The outpouring of grief for a legendary manager was vivid. And in regards to maintaining a meaningful relationship with the fanbase, that was evident last weekend when the club called for supporters to help clear snow away from the stands and pitchside areas at Vicarage Road so the game against West Brom could go ahead. Over a hundred answered the call, including a 71-year-old woman, and in turn they were rewarded with a free match ticket and a bacon roll. That type of thing simply doesn’t happen at a club that has lost touch with its heartland.

I’ve covered Watford’s last two games – the win against West Brom and, seven days before that, the home encounter with Everton. Neither fixture was particularly inspiring but in both Watford played with a level of togetherness and balance that provides further evidence that all is not as chaotic and transient at Vicarage Road as may appear the case.

And here’s the most important thing: Watford won both games, meaning ahead of this weekend’s visit to Arsenal they are ninth and on course for a fourth successive season in the Premier League, a period that has also seen them reach an FA Cup semi-final and beat Liverpool, Manchester United and Chelsea in successive campaigns. Whatever the Pozzos are doing, and however the club is functioning, it is working. Time, perhaps, for all of us to pay more attention.