Home Mediawatch The mystery of Liverpool’s missing £80m and more… 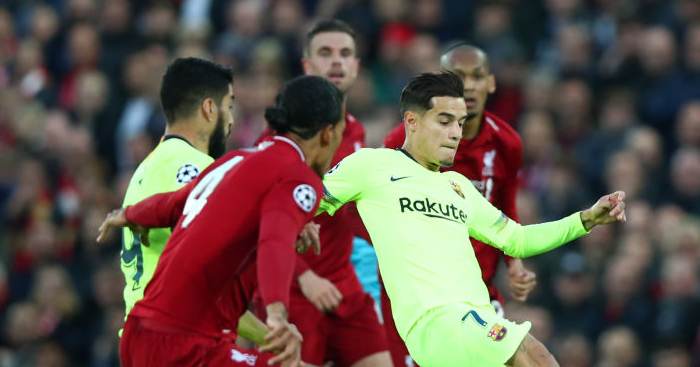 Liverpool and the case of the missing £80m
Mediawatch is getting increasingly annoyed at the ridiculous BBC gossip column and its commitment to clicks at any cost. Hence them including Coutinho (or Countinho, because all that money cannot buy you basic spelling, it seems) in their headline despite there being no actual transfer update on Philippe Coutinho. Or is there?

‘Liverpool could receive only £4.5m of the £84m they are still owed by Barcelona for Brazilian playmaker Philippe Coutinho, 27, who moved to the Nou Camp in 2018. (Mirror).’

Now we expect practically nothing of the Mirror website so we were not at all surprised to find that Liverpool have actually ‘received £105m up front for the sale of Coutinho, with the remaining £37million set to be paid in installments’ and that Liverpool are actually owed very little by Barcelona at all.

So what the Mirror have rather shamelessly done is taken the money owed by Barcelona – to a third-party lender – for Coutinho and implied that this even remotely effects Liverpool. SPOILER: It doesn’t.

‘Liverpool set to receive just £4.5m of the £84m Barcelona owe for Philippe Coutinho’ is their headline, which neglects to mention that Barcelona do not owe that money to Liverpool, who have already received the vast majority of the money and will receive the rest in due course. It is classic obfuscation.

Then along come the BBC to further wilfully misunderstand that headline and that story and make angry Liverpool fans think that they are going to miss out on £80m owed to them by evil Barcelona.

Can we write to Points of View?

Flopping mad
As we have spotted before, somebody inside Manchester United wants you all to think that Ole Gunnar Solskjaer is a tough guy. And that somebody has the number of Sun news man Richard Moriarty. And Moriarty has the number of The Sun’s Manchester football man Neil Custis. Together they combine to make it clear that Solskjaer is NOT TO BE MESSED WITH because he is FURIOUS.

And together they really do love the word ‘flops’.

‘OLE GUNNAR SOLSKJAER turned his hairdryer on for the first time as Manchester United boss after the 2-0 defeat by PSG’ – Neil Custis and Richard Moriarty, The Sun, February 15.

‘FURIOUS Ole Gunnar Solskjaer told his Man Utd flops he aims to get rid of HALF the team’ – Neil Custis and Richard Moriarty, The Sun, May 15.

‘OLE GUNNAR SOLSKJAER told his flops that they were ‘embarrassing’ him after Manchester United’s defeat at West Ham’ – Neil Custis and Richard Moriarty, The Sun, September 25.

‘OLE GUNNAR SOLSKAER told his Manchester United flops: ‘You’re going to get me the sack” – Neil Custis and Richard Moriarty, The Sun, October 6.

Warning of the day
According to that latest back page from The Sun’s Manchester double act, Solskjaer ‘even warned them the axe could fall on him if they get thumped at home to Liverpool’.

The players must be absolutely petrified that one of the worst managers in the club’s history could get the sack. Is it Halloween already?

And the warnings don’t end there. We learn that ‘in a no-nonsense message, Solskjaer also told the players their own futures were on the line as a new boss would not necessarily back them like he has’.

Presumably because a new boss would not necessarily need to back them if they were actually, you know, winning games.

Mediawatch fully expects that this series of ominous warnings will end in heavy defeat to Liverpool.

#Olein and #Oleout
The Daily Mirror have asked their writers if Ole Gunnar Solskjaer should be sacked. Astonishingly, the three Liverpool fans and correspondents (Andy Dunn, Darren Lewis, David Maddock) all say that Manchester United should stick with the Norwegian. Can’t think why.

Maddock does an awful job of explaining his stance when really a ‘because it’s funny as f***’ would have sufficed. He asks ‘what did they think was going to happen…he’d put together a team of teenagers and they’d win the league this year?’.

No, but we’re pretty sure they didn’t think he would put together ‘a team of teenagers’ (pesky fact: almost half of the side that lost 1-0 to Newcastle were actually 26 or above) and be sitting in 12th on the same points as Sheffield United.

John Cross is also a ‘DEFINITELY not’ when it comes to getting rid of Solskjaer. Again, it’s difficult to think why a staunch Arsenal fan would feel that way.

He writes that United have ‘tried the experienced manager with Louis van Gaal, tried the tried and tested winner in Jose Mourinho and now they’ve gone club legend with Ole Gunnar Solskjaer. They can’t keep changing the philosophy let alone the manager.’

Mediawatch would like to gently suggest that trying an ‘excellent manager with a recent history of success’ would be one change of philosophy that most Manchester United fans would embrace.

Follow through
Mediawatch genuinely LOLed at The Sun website’s big REVEAL that ‘MANCHESTER UNITED midfielder Fred has not played a through ball to a team-mate since April’. Wow. Really? That ‘damning stat’ certainly ‘highlights the Brazilian’s lack of creativity’.

Except it really doesn’t, because what they fail to mention among their ‘damning stats’ is that most teams play just one through ball a game, so one player – who has started just one Premier League game all season – not playing a through ball since April is entirely unremarkable.

Indeed, Mediawatch can REVEAL that Roberto Firmino, Mo Salah, Mason Mount and Jack Grealish are among many, many players who have not played a through ball to a teammate all season. They’re basically all shit.

C-c-c-called a u-turn
Mediawatch was happy to put Stan Collymore’s insistence that there is no crisis at Tottenham in its virtual back pocket and wheel it out on Christmas Day as he offered a ‘cast-iron guarantee’ that Spurs would be in the top four when the festive period comes around.

He wrote – just a week ago, remember – that Spurs ‘could quite conceivably be third in one more game’s time’. One game later, Spurs are actually in ninth and Collymore has already changed his mind. He’s not waiting for Christmas.

‘The pragmatist in me says the current golden era for the club ends this season, with Mauricio Pochettino leaving and the team breaking up.’

Where was the pragmatist in you last week, Stan?

Silva lining
Stan Collymore is also raging about Marco Silva, with the usual questions about why ‘British and Irish managers have been overlooked for him’. We’re not sure about the Irish part of that sentence – is he advocating Martin O’Neill or Mick McCarthy? – but Collymore is unusually right when he asks whether Eddie Howe could have done a better job. A stopped clock and all that.

But then he writes:

‘This season the tide has turned a bit with talented youngsters hailing from these shores producing the goods from Chelsea to Sheffield United and now Newcastle.’

Sheffield United have not played a single outfield player – British or otherwise – under the age of 23 this season so we’re not entirely sure how and why they could possibly add to the weight of evidence against the manager of Everton.

Lies, damned lies and proganganda…
Newcastle’s season ‘is not the disaster painted in some quarters’ writes Martin Samuel in the Daily Mail. As Samuel is the only journalist to recently conduct an in-depth interview with Mike Ashley, this is hardly a surprise.

‘Newcastle have only lost two of their last seven games. Not that you’d know it,’ writes Samuel. Well you wouldn’t know it because most would count a Carabao Cup defeat on penalties as a defeat. And even if you generously award that result ‘draw’ status, Newcastle have only won once in six games. We definitely know that.

Recommended reading of the day
Richard Jolly on Manchester United

David Squires on the managers under pressure