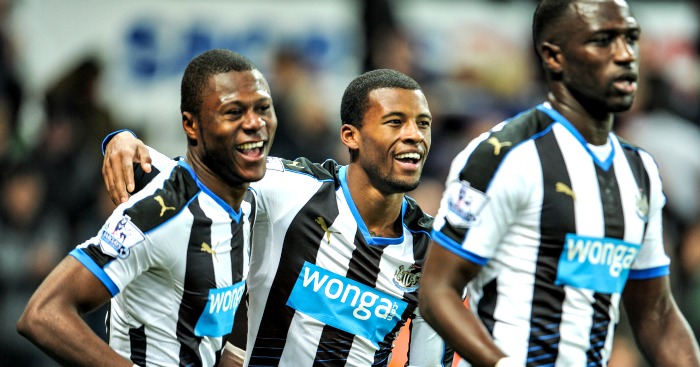 If Steve McClaren is still searching for the remedy to Newcastle’s troubles this season, the manager ought to ensure that the remainder of his side’s games are televised live. Sunday’s shock 2-0 victory over Liverpool means that all three of their Premier League wins so far have adorned our screens via Sky Sports or BT Sport. Two of their 13 points have been accrued away from the cameras. The term ‘game-raisers’ comes to mind.

A watershed win or yet another false dawn? The 6-2 victory over Norwich and 1-0 success over Bournemouth were both followed by 3-0 defeats, with Newcastle unable to build any meaningful momentum. Spurs, unbeaten since the opening day, are next.

It’s impossible to draw conclusions from such a spirited display at St James’ Park, where players, fans and McClaren united in expressing their audible relief. Three points does not lift them out of the relegation zone, such is the nature of their dire season.

Yet it did serve as a reminder of the quality Newcastle boast within their squad. On their day, Moussa Sissoko and Georginio Wijnaldum can cause problems for any defence; their day (particularly in Sissoko’s case) does not nearly come often enough. Siem de Jong, Ayoze Perez and Aleksandar Mitrovic can also lay claim to undeniable ability, but inconsistency has plagued them, as it has their club.

If you ask a certain section of the football media, the problem is obvious. ‘They have bought lots of players in and it almost looks like they have bought too many foreign players in,’ wrote one particular columnist for the Daily Telegraph, the identity of whom barely needs to be disclosed.

‘They could do with more of a British backbone to the team. They have bought loads of foreign forwards in,’ added a Mr H. Redknapp. ‘A couple came off the bench on Sunday and you are thinking: ‘Who is he, where has he come from?’ Check the first cliché box. A Premier League club is struggling because they signed too many foreigners.

Another misconception was captured by former midfielder Rob Lee, writing for the Newcastle Chronicle in September: ‘If I had to find one criticism of Newcastle’s recruitment policy this summer it’s would be that they haven’t bought players who know how exactly how English football works. There is no additional Premier League experience in that squad, and that does concern me a little bit.’

If ‘the Watford argument’ is applicable against Redknapp’s assertion – the Hornets sit ninth despite having 23 different nationalities overall – it also debunks Lee’s logic; at one stage this season, the components of Watford’s entire squad had made as many Premier League appearances as Shay Given.

That list has table-toppers Leicester’s squad in 14th overall for total Premier League career appearances. While Newcastle are 16th, fifth-placed Spurs rank 18th, and ninth-placed Watford sit dead last. It’s almost as if Premier League experience is superfluous beyond a certain point, and attempting to qualify it is an inexact science.

The importance of the fabled Premier League experience has been encapsulated in the performances of Fabricio Coloccini, Cheick Tiote and Gabriel Obertan in comparison with summer arrivals Wijnaldum, Mitrovic and Chancel Mbemba. The first group, three of just six players still at the club who were signed in or before 2011, comprise 393 Premier League appearances. The latter two have a cumulative 41. Newcastle’s fate will depend on them, not an old guard that the club has now outgrown.

McClaren addressed his side’s lack of nous in English football in October, while captain Coloccini recently echoed his thoughts:

“I can understand that criticism [that there are too many foreigners at Newcastle]. It is difficult when you come from other leagues and there is none harder than this one. They take time to adjust, and to give their best form. We need more experience in the Premier League, results show that.”

Like 10,000 spoons when all he needed was not to repeat a lazy platitude, Coloccini somehow avoided the most salient point: It is Newcastle’s most experienced players who are letting the club down yet again, not the newcomers. That Coloccini, with 200 Premier League appearances at 33 years of age, is both the oldest and most battle-worn member of Newcastle’s squad, must make his comments galling for supporters. The Argentinean has been the most disappointing performer; the centre-half is their supposed on-pitch leader.

Instead, Coloccini represents a group of mainstays including Tiote, Obertan, Sylvain Marveaux and Papiss Cisse. All are being outshone and outperformed by younger, hungrier, more passionate players in Wijnaldum, Mbemba, Mitrovic, Perez and Daryl Janmaat. The second four are flag-bearers for Newcastle’s much-maligned recent transfer business. All were signed in recent transfer windows, each arriving to question marks over their experience and suitability. Yet the new faces have put the old guard to shame.

While Coloccini and company provide the much-vaunted Premier League experience, and Jack Colback represents the desirable British aspect in the squad, it is the summer signings who will be decisive in terms of whether the Magpies survive. They are not the problem, but the best hope of finding a solution.