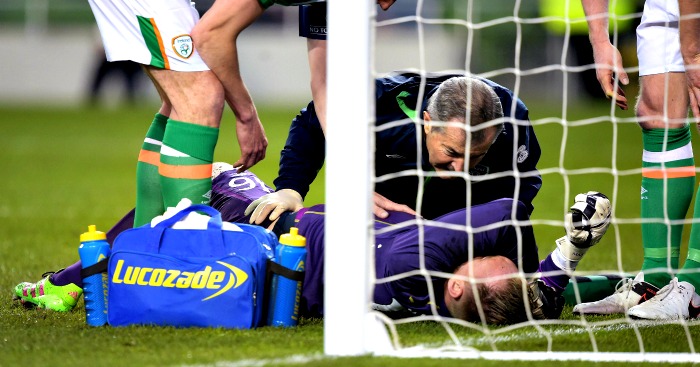 Newcastle goalkeeper Rob Elliot is facing heartache for club and country after suffering knee ligament damage on international duty with the Republic of Ireland.

The 29-year-old was carried from the field on a stretcher after landing awkwardly just 14 minutes into his second start for Ireland in Tuesday night’s 2-2 friendly draw with Slovakia at the Aviva Stadium.

Republic boss Martin O’Neill later confirmed the injury was serious, and it remains to be seen just how serious with the Magpies fighting desperately for Premier League survival and the Euro 2016 finals just weeks away.

Newcastle tweeted that the extent of the injury will be assessed by their medical team on Wednesday.

O’Neill said: “It is really cruel at this time that he’s gone and done it. He’s been waiting some time now for that run of games at club level, and he got them and I have to say he was doing very, very well indeed.

Elliot, who returned to the team hotel on Tuesday night after being examined in hospital, was hurt as Miroslav Stoch fired the visitors into a 14th-minute lead with a sweet right-foot finish from Erik Sabo’s cross.

But Ireland turned the game around inside two minutes with the help of Norwegian referee Ola Ober Nielsen when he awarded penalties for keeper Matus Kozacik’s challenge on Shane Long and Martin Skrtel’s trip on the same man.

Long converted the first and James McClean the second, and Ireland looked to be heading into the break with a lead until Peter Pekarik’s cross hit defender Paul McShane and crept past replacement keeper Darren Randolph.

O’Neill said: “The first penalty – I haven’t seen it back, but they tell me it might have been a wee bit harsh. I thought that at the time; the second was a definite penalty, but apparently their lad has fisted the ball into the net for the equaliser for them, so maybe it levels things up a bit.”

Slovakia boss Jan Kozak was satisfied with a draw, but unhappy with the first penalty decision.

“The game ended in a draw and that was very good. Ireland are a very good team with a lot of experience, so I am glad we finished with a draw.”