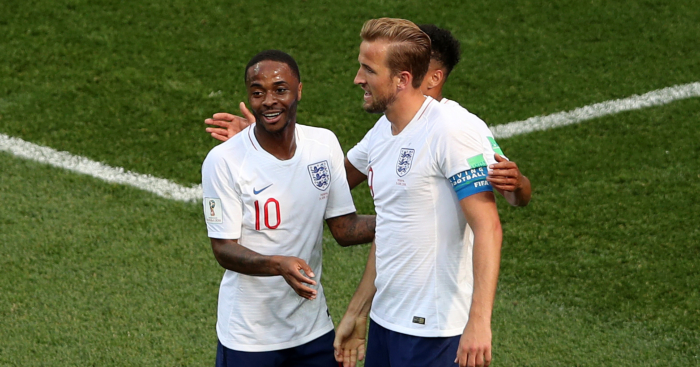 Dirty Harry
The problem with the Raheem Sterling versus Joe Gomez furore – at least from a media standpoint – is that it started on Sunday, blew up on Monday and only really carried into Tuesday. By far the biggest story of the entire international week had inevitably run out of steam by Wednesday; England play on Thursday.

That is why we get instances of Sterling being described as an ‘almost monster-like figure’ by Liverpool.com, and Dominic King asking ‘WHERE’S HARRY’ in the Daily Mail. This needs to be dragged out for as long as possible. No ridiculous stone can be left unturned.

‘Where was the captain?’ King writes. ‘In a week when questions have surrounded the England team, another came to mind on the eve of a landmark occasion.’

It didn’t. It really didn’t. Not a single second passed by where anyone thought ‘But what does Harry Kane think of all this?!’ Except for broadsheet journalists, of course.

‘Put aside the furore around Raheem Sterling and Joe Gomez, England’s 1,000th game should have been a moment for Harry Kane to step forward and open up, to place himself at the head of the squad and speak on their behalf.’

Why? Not because, as the headline says, this was ‘England’s week of turmoil,’ but because they have reached an arbitrary milestone in terms of games?

Here is a taster of what Kane might have said had he been chosen for the press conference instead of Harry Maguire. And these are all literal quotes from an interview he gave to the FA’s official programme on Wednesday:

“Yeah, it’s pretty amazing. Being part of England is a special thing to do and something which you dream of as a youngster so to be a part of that is something to savour.”

“1000 games is pretty amazing, so the fact that we’re playing in this game and making a little bit of history will be great.”

“The most important thing will be to win the game, but it’ll be a special occasion for us and the fans.”

“I guess this one comes around with a little bit of luck, just to be around and in the right place at the right time but to be leading the team out for such a momentous occasion will be something I look back on when I’ve retired and can really take it in.”

He genuinely says he is fortunate to be “around and in the right place at the right time” for England’s 1,000th game. Forgive Mediawatch for not ruing the fact we missed out on such gems at a press conference.

‘Instead, the obligation to face the media fell to Harry Maguire. In a crowded, stuffy room at the Grove Hotel, the Manchester United defender sat beside Gareth Southgate but gave no hint that he enjoyed the experience.’

‘He was adamant, though, that the skipper had not neglected his duties.’

Who was suggesting he had? Is that a straw man you’re constructing, there, Dominic?

‘It is not unusual for England to share pre-match press duties around.’

That does rather beg the question as to why an entire column has been dedicated to that very practise, then.

‘You will have heard the term ‘leadership group’ a lot in the last 48 hours and Southgate is adamant that it should not fall to the same man to speak on what is known as ‘matchday minus one’.’

Why is everyone so adamant about everything? And considering Kane did the press conference for England’s most recent match against Bulgaria – and much of the troubling aftermath – is it really worth questioning why he didn’t do this one? Remember: ‘It is not unusual for England to share pre-match press duties around.’

‘If ever there was an argument to say he should have stayed in the hot seat, however, it was now.’

So he could tell us that the three points are the most important thing? No thanks.

‘You think back to some of the other 121 men who have had the responsibility of leading England, especially in the recent past, and it is doubtful they would have been content to sit in the shadows.’

Oh do give over. It’s not a case of being ‘content to sit in the shadows’. It’s case of him being a footballer eager to focus on football, rather than a public relations officer. Bobby Moore and Bryan Robson would have given just as little of a sh*t about this.

King proceeds to tell us that Jordan Henderson ‘had been instrumental’ in handling the Sterling and Gomez situation behind the scenes, with the implication that he was doing the captain’s job. Then…

‘All we saw from Kane, though, was him heading out on to the Sir Bobby Charlton pitch on Tuesday a few moments before the main throng of players, keeping his own counsel before the session started. We are still none the wiser as to what he has made of it all.’

Again, Mediawatch will live not knowing what Kane thinks of two friends having a bit of a fight after a particularly heated moment a day earlier; a situation, it must be reiterated, that has long been sorted and considered swept under numerous rugs by the men involved.

Gatekeeper
The story is not granted the honour of sitting atop the MailOnline‘s football homepage. That is instead bestowed upon a Sami Mokbel exclusive.

“Well, he…I wouldn’t imagine that he’s overly enthusiastic, but I can understand that. You know, in the end he’s with the group, that’s the most important thing.”

And that goes for each of the following:

‘Gareth Southgate admits Raheem Sterling might have ‘the hump’ with him after dropping England star’ – London Evening Standard.

‘Raheem Sterling still has the hump with Gareth Southgate after being dropped for Montenegro – but he will play Kosovo’ – The Sun.

Mediawatch sorely wishes people had listened to what he actually said and stuck this in their respective headlines instead:

“So for me, the thing is finished.”

Fraser pain
Credit to the Daily Mirror website for a striking amount of self-awareness with the following story:

After five paragraphs of pointless preamble, by the sixth we are finally told the actual name of the man who knows ‘exactly the player Liverpool need’ to sign in January.

How strange that they decided not to tell us it was Jason Cundy until we were halfway down the page.

Ask a simple question
‘Sterling is missing, but Montenegro are coming to London to expect to get beat. Could Dele Alli or Callum Hudson-Odoi get a chance?’ – Charlie Nicholas, Sky Sports.

‘The Dele Alli who hasn’t been in any of the last three England squads, including this one? Probably not’ – Mediawatch.

Taking the Mik
‘How Arsenal could line up under Arteta with Sane, Foden and Upamecano with Spaniard using Pep’s style of play’ – The Sun.

Manchester City, the two-time reigning Premier League champions, would definitely let their assistant manager, best academy product and one of their brightest young players leave for a direct rival. And Arsenal would definitely pay for it all to happen.

talkPORT, Red Bull, a double espresso and a cheese and ham omelette
Still, that’s nothing on talkSPORT‘s offering:

It turns out that signing Jamie Vardy and Riyad Mahrez would have fixed Santi Cazorla’s knackered Achilles tendon.

And that’s without even starting on that hyphenation…

Recommended reading of the day
Sam Lee on Manchester City.