Home Mediawatch The Ox > Alonso; Ospina ‘needs to be sold’ 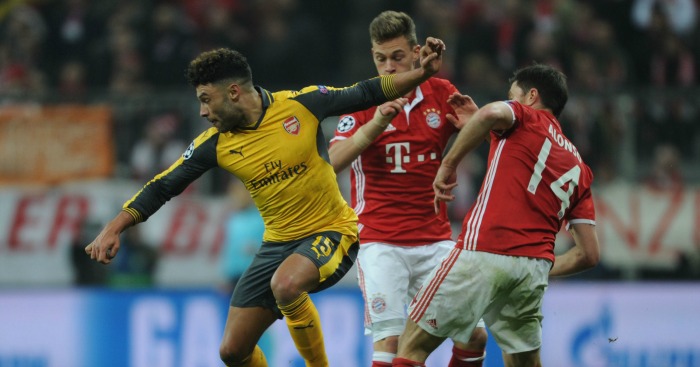 Mediawatch rewind
Who was Martin Keown talking about when he said this in May 2016?

“When he gets onto his left foot in these areas, there isn’t a better player in Europe.”

Like the clappers
Paul Hayward is the Chief Sports Writer of the Daily Telegraph. His Twitter bio also says he is in ‘his 30th year of reporting’. He is also in his ‘seventh year of being on Twitter’, so you think he would know how to delete a tweet. A tweet like this one, for example:

Sums up Arsenal's dreadful night that Alex Oxlade-Chamberlain is on the pitch on his own clapping the wrong fans. Bayern's clapping him back

But after so many retweets he clearly could not quite bring himself to delete the tweet, even after hundreds of people told him he was wrong.

Instead he issued not one, not two, but three clarifications, including this one:

So in no way was it intended to suggest Oxlade-Chamberlain was favouring Bayern fans. An innocent error on a tough night for Arsenal.

You absolutely did intend to suggest Oxlade-Chamberlain was favouring Bayern fans. Now if only there were a way to amend ‘innocent errors’ on Twitter…

Real gone Kidd
You may remember from Wednesday’s Mediawatch (you should remember, it was only 24 sodding hours ago) that The Sun’s Dave Kidd lost his mind over Arsene Wenger picking David Ospina over Petr Cech, writing:

‘As an example of the essential softness of Arsene Wenger’s latter-day Arsenal, it was pretty much perfect.

‘We had to remind ourselves that we were talking about the knock-out stage of the world’s premier club competition here and not a social Sunday League match for the Dog & Duck.

‘”You pay your subs, Dave, so it’s only fair that you’ll get the occasional match. You’re in against the Red Lion, so big Pete can have a few beers on Saturday night and sleep off his hangover”.’

Because of course the Colombian international keeper with 75 caps is exactly the same as Dave from the Dog & Duck.

But having watched Arsenal get destroyed by Bayern Munich 5-1 on Wednesday night, we all agreed that Ospina could have done nothing about any of Bayern’s five goals and actually made two excellent saves.

Well, most of us agreed. Here is Kidd in Thursday’s newspaper:

‘THERE was Kieran Gibbs wearing the Arsenal captain’s armband.’

Agreed. That was mental.

‘Or there was Francis Coquelin courteously inviting Arjen Robben to cut inside and thump home Bayern Munich’s opener.’

Agreed. That was ridiculous.

‘Or perhaps you prefer keeper David Ospina flapping about alarmingly after Arsene Wenger’s amateur hour decision to start him in front of Petr Cech – who had won the Champions League inside this very arena five years ago.’

‘Flapping about alarmingly’? Is this your privilege as the Chief Sports Writer of the most popular newspaper in Britain, to deliberately obfuscate in order to seemingly prove your point?

‘Ospina, hopelessly exposed by this dopey Arsenal defence, was easily beaten. The poor fella, pretty much faultless for all five goals…’

On page 53, he was ‘flapping about alarmingly and on page 55, he was a ‘poor fella’ who was ‘pretty much faultless’.

Spot the man with the agenda.

SELL HIM
Mind you, Kidd has one ally in The Sun’s Football Editor (don’t they all have fancy titles?) Charlie Wyett.

He was tasked (or tasked himself, presumably) with an OSPINA WATCH, in which he admitted that the keeper was not at fault for the goals and failed to mention any actual saves, which sounds like a pretty useless bit of watching to us.

Wyett ends with this VERDICT:

‘IT was a mistake not to play Cech, even though Arsenal would still have lost.

‘Ospina should not be playing in the Champions League. He needs to be sold.’

Sorry, what? We have read that several times now and each time, it really does seem to suggest that Arsenal ‘need to’ sell David Ospina. Why stop there? Just hang him.

‘I have covered Arsene Wenger on a regular basis for 20-odd years.

‘And I have never seen him like this before. He looks a broken man and it’s almost sad to see because he is truly one of the all time great managers.’

The Ox and the Lahm
Poor John Cross. He didn’t even get to write the Arsenal match report. Does Chief Sports Writer trump Chief Football Writer?

That task fell to the Daily Mirror’s Andy Dunn, who wrote of ‘one of the most humiliating nights’ and a ‘capitulation, a wretched loss of heart, organisation and tactical nous’.

So why then do his player ratings for Arsenal add up to just nine short of Bayern’s?

Was Alexis Sanchez (8) really better than every other player on the pitch bar Arjen Robben (9) and Thiago (8)? Philipp Lahm (7). Xabi Alonso (6), Arturo Vidal (7) and Robert Lewandowski (7) may disagree.

Obviously Alonso was not in the same class as Alex Oxlade-Chamberlain (7), who ‘carried out his duties excellently’.

And here he is ‘carrying out his duties excellently’, presuming he was tasked with acting like a five-year-old:

Off to @ManUtd
Below @Arsenal in the league, not even in the CL, spent more than Gunners last summer..so where is the hysteria? #Perspective

…or we could point out that Humphrey’s original, quickly deleted, tweet read:

‘Off to @ManUtd. Below @Arsenal in the league, out of FA Cup, spent more than Gunners last summer…so where is the hysteria? #Perspective’

Presumably he was reminded that Manchester United are not only still very much in the FA Cup, but are actually playing Blackburn on Sunday. On BT Sport.

Kidnapped
It’s a favourite theme of Harry Redknapp’s this…that Tottenham’s Dele Alli is a better player than Paul Pogba. Here he is in October.

It’s also a favourite theme of Redknapp’s that other clubs should have scouted Alli, who was a regular in the MK Dons side as a teenager.  He picked up the well-worn baton again on Wednesday on BT Sport.

“Can you tell me how all those scouts failed to spot him when he was playing for MK Dons every week? How did they end up waiting until Tottenham came in for him?”

It’s just a shame that Redknapp was not managing a Premier League side at the time. Oh, wait a minute, he was, and he admitted last April: “I scouted Dele Alli several times as did a lot of other clubs, but with a view to the future.”

So you did spot him but “ended up waiting until Tottenham came in for him”? Can you tell us how that happened, Harry? It’s almost as unbe-facking-lievable as getting two points from eight games. It is indeed “incredible” that nobody took him. Except, well they did; Tottenham did.

It’s almost worth ignoring the claim that Dele Alli is now worth £100m because they are simply mindless ravings. Watch his 90 minutes against Liverpool again (60% pass completion, one off-target shot, three poor touches to lose the ball) and tell us again that he is worth £100m.

But this is absolute genius and is making us grin ridiculously:

“Didn’t he play for MK Dons against Manchester United when they beat them 4-0 in the League Cup? United should have signed him there and then. At least they would have gone home disappointed with the result but they would have had a future star for the club with them on the bus.”

Presumably he thinks Barcelona should have done the same with Marco Verratti. And Adrian Rabiot. And…f*** it, just throw the whole lot in the back of the van.