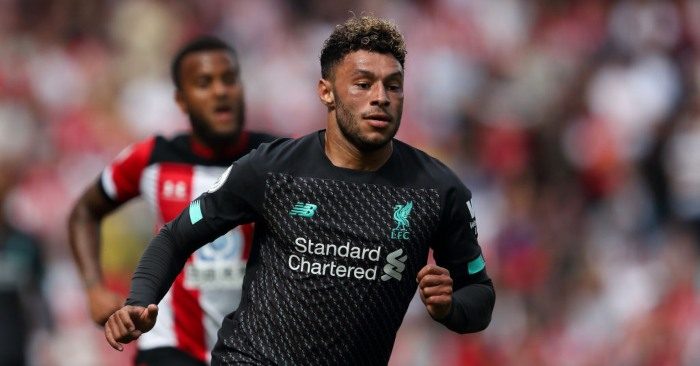 Sadio Mane and Roberto Firmino scored the goals which gave Liverpool a 2-1 victory at Southampton last weekend, but almost as important as those contributions was the presence of Alex Oxlade-Chamberlain behind them in midfield.

Despite an appearance in the European Super Cup days earlier, this felt like the moment he truly returned to the Liverpool fold. He was playing in his favoured central position, from where he can make the most impact for Jürgen Klopp’s European champions, who need someone to be effective in attack from this area of the park.

Back in April 2018, the Ox was just getting into his stride at Liverpool when a serious knee injury sustained during a Champions League semi-final first-leg tie against Roma at Anfield stopped him in his tracks. This devastating blow followed a goal against Manchester City in the previous round which felt like a defining moment in his Liverpool career.

That player who scored against City- bursting from midfield into attack – is the Oxlade-Chamberlain Liverpool fans wanted to see. An all-action number eight with good dribbling ability, creativity, and a threat to the opposition’s goal from anywhere around the area.

Kevin De Bruyne christened this role ‘free eight’, and the evolution of the position has occurred almost simultaneously at Liverpool and City.

Oxlade-Chamberlain operates in midfield like few players in the Liverpool squad can. Positionally, it’s not too different to the role Adam Lallana has played for the club in the past, but the former Arsenal man’s attributes mean he offers much more.

It can bring to mind Steven Gerrard, as well as De Bruyne, and that Oxlade-Chamberlain goal against City in the Champions League quarter-final certainly recalled Liverpool’s former captain.

Now remember Ox’s goal against City in the first leg? Something that even the great Stevie would be proud of.

Sorry for the Oxlade-Chamberlain love fest… he’s just brilliant in my eyes. pic.twitter.com/3JK9IOtLzO

There’s a case to say that this free eight role, somewhere between central midfielder and support striker or No 10, was the position Gerrard played in those heady days in support of Fernando Torres in the Liverpool attack, but the difference between Gerrard’s role and the more modern version is that Gerrard was more ‘free’ than ‘eight’. Closer to a traditional number ten or support striker, but offering some of the characteristics of a central midfielder.

Today the position is one which combines the attributes of a central midfielder, creative No 10 and also a winger, as dribbling skill is important in deep and advanced areas.

A dribbling central midfielder is something Liverpool have lacked in recent times. Naby Keita could be that player. He has the ability to bound through the middle of the park, but when he’s not available – as is sadly often the case – Oxlade-Chamberlain has to play.

Dribbling from deep is an important part of the game as it creates space further forward by taking out opposition players. This then forces defenders to move from their position, or at least puts them in two minds about who to mark and which area to defend.

Oxlade-Chamberlain completed four dribbles against Southampton, more than any other Liverpool player. He also made a key pass, had two shots on goal, and unlike some adventurous midfielders, his play was not wasteful, reflected in a pass accuracy of 90%.

On one occasion he evaded the Southampton midfield, riding a foul in the process and opening up the pitch to create space and a dangerous attack, using Trent Alexander-Arnold, who found himself in acres of space down the right as a result of Oxalde-Chamberlain’s earlier work. 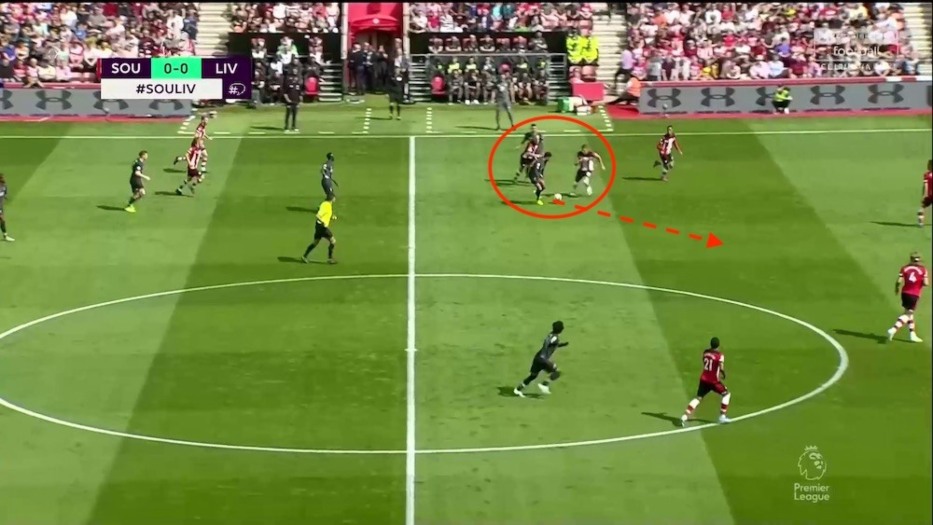 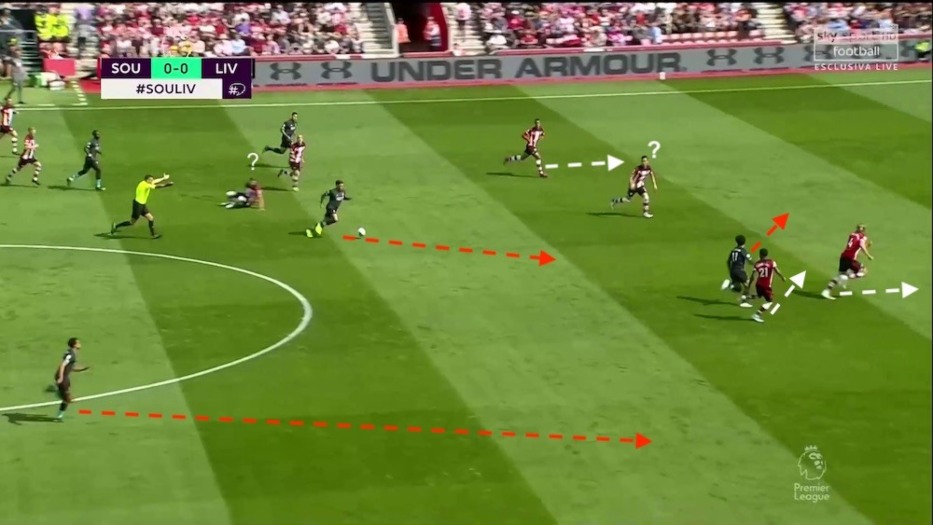 Liverpool fans may be used to seeing long, lofted balls out wide to the full-backs, but these are easy in comparison to the more central, direct long pass through traffic which Oxlade-Chamberlain demonstrated here, finding Mohamed Salah with a well weighted long ball over and through the heart of the Southampton defence.

In total, he completed four out of four attempted long passes. 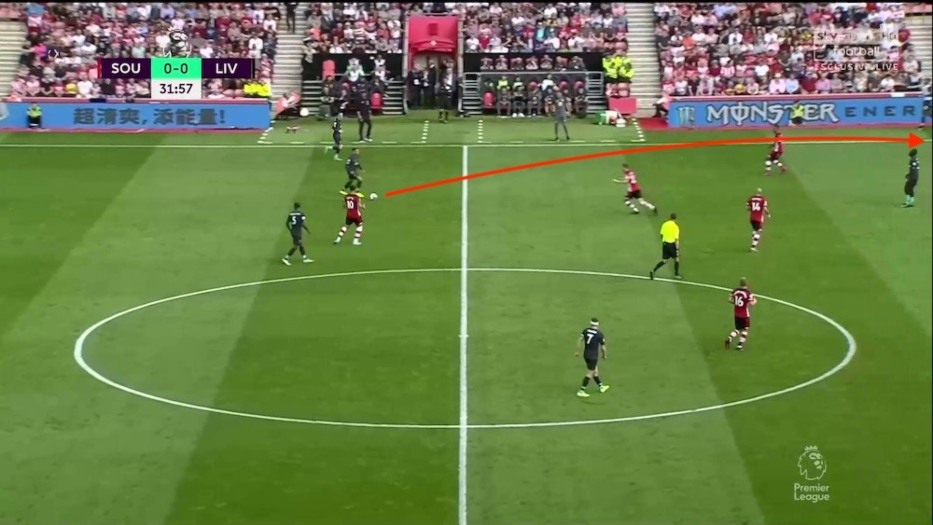 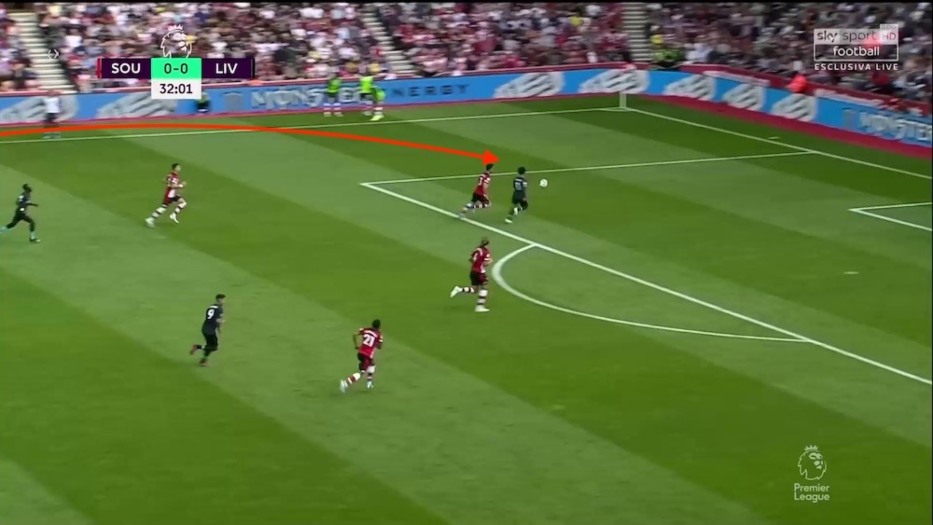 One worry for Liverpool this season so far has been the defence. Not necessarily the defenders themselves, but the defensive play of the team as a whole. And fitting into Klopp’s plan without the ball is vital for a player coming into the XI after a spell on the sidelines, just as it would be for a new signing.

Liverpool have not kept a clean sheet since their first pre-season friendly against Tranmere Rovers, and there has been plenty of discussion around the higher line the defence is supposedly taking up this season, although players and manager deny this is the case.

There should be no worries around Oxlade-Chamberlain’s work rate off the ball, and defensively he can only improve on the display of James Milner and Jordan Henderson in the European Super Cup against Chelsea. These are seasoned players who were regularly bypassed by the opposition.

His own display in that game, during which he was stationed out on the left wing, put to bed any doubts around his best position. He was fairly anonymous out wide — not really through any fault of his own.

“It’s a position he can play. He can play much better than he did tonight, but that’s how it is,” said Klopp after the game in Istanbul, which Liverpool won on penalties.

“We want to give him the opportunity to perform, to shine. In those circumstances, in that [left wing] position, it was obviously not as possible as we would have wished. But that’s my mistake and not his because I made the decision.”

It didn’t take Klopp long to rectify this ‘mistake’, keeping Oxlade-Chamberlain in the starting line-up for the game at St. Mary’s, but this time using him in midfield alongside Georginio Wijnaldum and James Milner, even though he was more often alongside Firmino and Mane.

The lack of squad depth in attack means that Oxlade-Chamberlain may be needed further forward again this season, but where possible he should remain in this midfield role, rotating with Keita, or possibly even alongside the Guinean once he is fit.

While Gerrard was more free than eight – to return to De Bruyne’s description of this position – too many of Liverpool’s current midfielders are more eight than free. In City’s recent draw at home to Spurs, De Bruyne was so free that he spent much of the game alongside striker Sergio Agüero, but he also used his engine to track back then needed.

Oxlade-Chamberlain could perform the same duties for Liverpool as the 4-3-3 morphs into a 4-2-4, putting further pressure on the deep defensive lines Klopp’s side regularly face.

Liverpool rely a lot on their full-backs to provide an attacking outlet, and though this can still be an option – as shown in the earlier example – having a threat from midfield will give opposition defences something else to think about and could even create more space for the full-backs.

Liverpool have created problems for themselves this season by not adding to their first team, but seeing as the ‘like a new signing’ trope is being used for De Bruyne, who spent much of last season on the sidelines for City, so it can be used for Oxlade-Chamberlain, whose similar if not equal characteristics Liverpool have sorely missed.