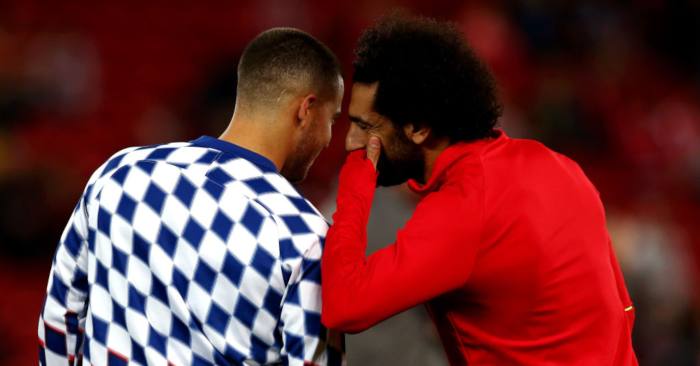 To create a ‘perfect’ team you must have centre-halves with different skill-sets, a passing midfielder partnered with a tackler, two tackling and crossing full-backs, three attacking midfielders who can create, dribble and/or score goals, and a striker capable of finishing any chance. We have it all.

Before we start, players must have started 20 of the 38 Premier League games this season…

The numbers have been slowly dropping but Alisson’s save percentage of 76.3% still makes him the safest pair of hands in the Premier League; he has kept a remarkable 21 clean sheets despite facing considerably more shots on target than Manchester City man Ederson.

He is only one of five keepers over the 70% benchmark, with Hugo Lloris, Vincente Guaita, Lukasz Fabianski and Bernd Leno making up that impressive quintet. David De Gea fell just short of that mark with 69%, his numbers falling over the last few nightmare weeks.

Trust us, we’re no more happy about this than you are. But we have looked at the numbers and Aaron Wan-Bissaka does not create enough chances, Trent Alexander-Arnold does not make enough tackles and Ricardo Perreira simply does not cross the ball. That left us with Trippier, who has looked pretty garbage to the naked eye and yet creates more chances per 90 than any other right-back, while sitting behind only AWB, Perreira and Cesar Azpilicueta in the tackle stakes.

He’s actually the man with the best pass completion rate in the Premier League, pushing teammate Aymeric Laporte into second. That he has lost his place to Vincent Kompany in recent weeks shows you that you shouldn’t really play two pretty passers; you need a hard man in there too. Pep Guardiola knows the importance of balance, which is why his big summer move will be for…

It’s no exaggeration to say that Brighton would not still be a Premier League club if it weren’t for Shane Duffy, who really likes to use his head. Six times this season he has edged into double figures for aerial duels won per game; as a rough guide, he wins over 73% of the headers he contests, which puts him in the same kind of bracket as Virgil van Dijk. No wonder he was Brighton’s Player of the Year.

As for clearances, in one game with Newcastle in October, he made a barely believable 19 in a 1-0 win. And that’s exactly the kind of thing that kept the Seagulls in the Premier League. That only Glenn Murray scored more goals for Brighton this season is something of a bonus.

Not many defenders in the @premierleague like @shaneduffy and @LewisDunk5 It s pleasure watching them enjoying basic defensive duties. Call me old school but they are proper centre backs 👌🏾

And you know, it’s not even close when it comes to Liverpool’s Andy Robertson. They are head to head when it comes to tackles (2.2 per 90), though the Scot is dribbled past more often than the Frenchman across Stanley Park, but Digne creates far more chances than Robertson. In fact, the gap in total over the season is 20 key passes in favour of Digne, even though Robertson has played more minutes. That Robertson leads Digne 11-4 in terms of actual assists tells you a great deal about the quality of Liverpool’s forwards and not a great deal about the flaws in Digne’s play.

Lucas Digne finishes the season on an average rating of 7,36 in the #PremierLeague player ranking by @WhoScored – all ratings based on stats and #NoBiasedOpinions. #Everton's @LucasDigne is…
…the best rated left-back in the #EPL.
…the best rated player outside the Top6. pic.twitter.com/i0BaBGvqNc

You might be surprised to find that second behind Digne is actually Matt Ritchie, who has been a revelation since he switched to left wing-back for Rafa Benitez at Newcastle.

There’s a reason Manchester United reportedly want Idrissa Gueye. And there’s a reason Everton absolutely do not want to sell; Gueye is the Premier League’s most voracious tackler, winning the ball an awe-inspiring 141 times from 179 attempts. Gueye and Leicester’s Wilfred Ndidi are basically in a league of their own when it comes to snapping at ankles in midfield but the terrier-like 29-year-old is king.

Gueye also has a pretty healthy interceptions record (though of course he is no Jonathan Hogg), which is enough to make him statistically the best defensive midfielder in the Premier League, ahead of both Ndidi and Southampton’s Oriel Romeu.

The numbers have undoubtedly come down but Jorginho still leads the passing pack with 88.7 passes per 90 minutes in the Premier League this season. He might have antagonised some Chelsea fans with his safety-first nurturing of the ball, but others are coming round to a certain level of appreciation.

I could go all night long about how good Loftus Cheek is but I have to give some deserved credit to Jorginho.

So who can we offer as back-up to Jorginho (wanted by Pep Guardiola last summer, remember)? Ilkay Gundogan, Fernandinho, David Silva, Granit Xhaka and Jorgen Henderson make up a sextet of 70-pass-plus men.

It’s only right that the man who has created the most Premier League goals this season (15) should make it into this ‘perfect’ Premier League XI of the season, which actually does feel pretty perfect as long as we ignore the large Trippier-sized elephant in the room and pretend that Shane Duffy is actually Virgil van Dijk. Hazard has created 3.3 chances per 90 minutes this season when not playing up front, which is bizarrely the same number as teammate Willian. The only Premier League game in which the Belgian has not created a chance this season? The 2-0 defeat to Liverpool in which he played as a striker.

Behind Hazard and Willian in the ‘chances created per 90’ charts are James Maddison, David Silva and Ryan Fraser. For the record, the first Liverpool man is Mo Salah in 19th, just ahead of Paul Pogba in 20th.

Danger. Danger. High voltage. Mo Salah has more shots per 90 than any other player who does not play as a traditional centre-forward so it stands to reason that he produces the most shots on target, ahead of Hazard, Pedro, Sadio Mane and City pair Raheem Sterling and Leroy Sane.

When you add dribbles, Hazard comes out on top by a country mile, but he is already in our XI for all those chances he creates; he really is an incredible player. So we turn instead to Salah, which feels about right considering all those bloody goals he scores.

Of course we wanted this to be Maddison, Sterling or Christian Eriksen, but it turns out that Willian creates a shedload of chances (it helps if you take the corners) and takes a fair few shots too. That he has claimed just three goals and six assists in the Premier League this season is a mystery only partially solved by WhoScored’s description of his weaknesses being simply ‘finishing’. Still, Barcelona have been chasing him for years for a reason.

Said it before I’ll walk Willian to Barcelona for £50millions https://t.co/CcbCSE4yHW

It’s also worth noting that Hazard would have made this XI on this criteria too, and that neither the PFA nor the FWA Player of the Year is deemed quite ‘perfect’ enough. All of which makes us imagine what the Belgian could achieve if he were surrounded by better players.

Not only does he have the best conversion rate (29.41%) but he hits the target with 58.82% of his shots, which makes him one hell of a sharp shooter, despite him failing to trouble the Premier League scorers since March. It’s a shame he basically does not look arsed.

So who sits just behind Martial in the conversion charts? Raheem Sterling, Pierre-Emerick Aubameyang, Jamie Vardy, Sadio Mane and Glenn Murray, that’s who.