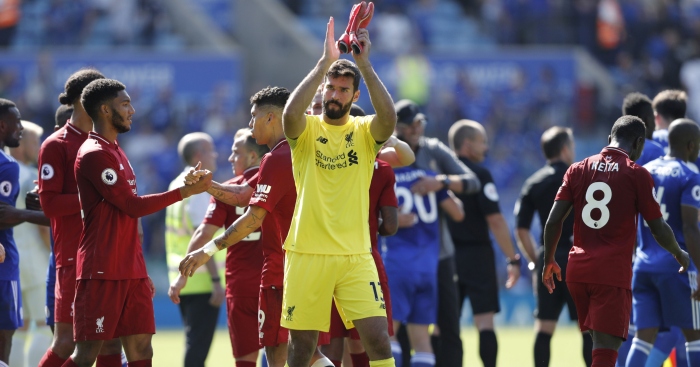 Not a bad start at all for the Brazilian, who has saved ten of 11 of the shots on target he has faced. That gives him a save percentage of over 90%, which contrasts nicely with the fella at the bottom of this list – one David De Gea, who has saved just half the shots that Manchester United’s opponents have got on target. Ah, so this is what happens if the Spaniard is not phenomenal.

Behind Alisson in terms of shot percentage so far this season are 2) Southampton’s Alex McCarthy (deserving the England call-up), 3) Tottenham’s Hugo Lloris and 4) Cardiff and the Philippines’ Neil Etheridge.

With Kieran Trippier and Antonio Valencia not playing enough games so far this season, the right-back slot goes to new England Under-21 (one cap, one clean sheet) man Aaron-Wan Bissaka, who has created five chances this season – one of which led to a goal for Wilfried Zaha in the opening-day win over Fulham. “I enjoy attacking and defending as I used to be a winger,” he said. “It’s still in my game a bit and it’s always good to get an assist as well.”

You know what’s also in his game? Tackling, that’s what. He has won the ball 11 times out of 13 attempts so far this season. That’s not quite Seamus Coleman 15/15 standards, but then the Irishman has created one chance in 360 minutes so frankly he can feck off.

I think 1v1 defending and being able to complete take-ons are the two most important qualities of a full-back. Which is why I really like the look of Crystal Palace's Aaron Wan-Bissaka from watching him.

John Stones ties with Aymeric Laporte for the Premier League’s best pass completion rate bar none (95.1%) but we have given the nod to Stones over the Frenchman because his interception and clearance statistics are rather better than his Manchester City teammate. Only Pep Guardiola knows why he dropped him for the Wolves game; Vincent Kompany duly reminded him why Stones should be first choice for both club and country.

Away from City, you might be surprised to know that Mamadou Sakho’s pass completion rate is 93.5%. Not bad at all for a struggling Palace side.

Move over James Tarkowski, there is a new defensive rock in town. After an opening-day experiment as a central midfielder, Sol Bamba has returned to where he feels comfortable – heading everything in sight in Cardiff’s central defence. Against Newcastle, he made 15 clearances and was rewarded with a clean sheet. He then made ten against Huddersfield and was rewarded with another clean sheet. He only made six against Arsenal and Cardiff conceded three so a pattern has emerged: Bamba (and his partner Sean Morrison) will thrive when faced with big, physical strikers; against trickier customers, they may struggle. That pair are also at the top of the ‘aerial duels won’ chart. Of course.

Ten chances created in four Liverpool games, two of which have led to goals – one for Mo Salah against West Ham and then for Sadio Mane against Leicester. He truly is an excellent full-back. Though Jose Holebas might argue that his four assists should earn him a place in this team, we are also keen to take tackles into account. And Robertson has made twice as many tackles as the unlikely Greek hero.

If we were solely judging on tackles, then we would find a place for West Ham left-back Arthur Masuaku, but one chance created in 270 minutes is a pretty damning statistic. We want an all-action man and Robertson is that (Scots)man.

Andrew Robertson, the best left back in the Premier League, was at it again while Captaining Scotland #YNWA https://t.co/RxaVOAHLAK

There are four defensive midfielders who feature in the top ten of Premier League players with most interceptions and most successful tackles per 90 minutes. They are – in reverse order – Brighton’s Dale Stephens (benefiting from those new Brighton tactics), Arsenal’s new action man Matteo Guendouzi, Watford’s haphazard Etienne Capoue and Everton’s Idrissa Gueye, taking on the mantle of the Premier League’s leading defensive midfielder now N’Golo Kante has moved further up the Chelsea pitch. Add goal threat as a criteria, and he would have serious competition from Fulham’s Jean-Michael Seri.

My word, Chelsea do an awful lot of passing. And a large proportion of that passing is done by Jorginho, who has attempted over 100 more passes in four Premier League games than the next man on the list (James Milner). Against Newcastle, he attempted 173 passes; the opposition only attempted 221 in total.

Of course, the Italian metronome has only created one chance with his 417 passes, but he does not need to be creative, merely prompt and probe and allow these fellas to do all of the fancy work…

The master. The chief. The absolute bomb. No player has created more chances this season in the Premier League than David Silva and his 13, and the Spaniard missed the opening-weekend win over Arsenal. Those 13 key passes have not reaped a single assist, but we blame that on anybody and everybody but Silva himself.

David Silva was voted the best Spanish player in PL history. He’s the best attacking midfielder the PL has ever seen.

Putting those two statistics together (per 90) spits out six very good attacking midfielders who can give defenders kittens. David Silva makes the list (he’s good at every bloody thing) but so do Sadio Mane, Aaron Ramsey, Pedro, Raheem Sterling and our choice in this category – Mo Salah, Salah. Mane might have scored more goals than Salah so far this season, but the Egyptian is the one man in the Premier League to match Silva key pass for key pass.

It’s worth noting that Demarai Gray would make this XI if we were judging on dribbling alone; Eden Hazard is ruled out on grounds of not playing enough football.

So we are talking goal threat, which means we are talking Andre Schurrle, who narrowly edges out Aaron Ramsey in this XI. It’s worth noting that Silva and Salah are both ahead of Schurrle on this selection criteria too; they are really are very good indeed. Fulham’s Schurrle takes more shots per 90 (5.3) than any other Premier League player (there were 11 v Burnley alone) but has also weighed in with six key passes in 239 minutes of football. He is one reason why Fulham have scored more goals than any other team in the bottom half.

If you only include players with three Premier League goals so far this season, then Glenn Murray is your man. We want a striker in this position so we are leaving Richarlison and Lucas Moura on the bench as potential match-winning substitutes. Meanwhile, Murray has scored three goals from just eight shots; Sergio Aguero has reached the same total from 20, while Romelu Lukaku needed 12 attempts.