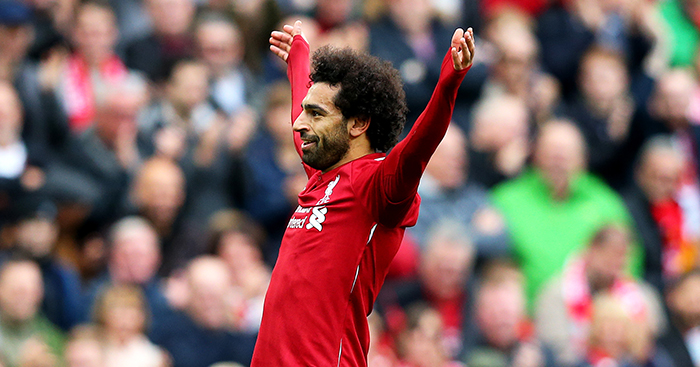 To create a ‘perfect’ team you must have centre-halves with different skill-sets, a passing midfielder partnered with a tackler, two tackling and crossing full-backs, three attacking midfielders who can create, dribble and/or score goals, and a striker capable of finishing any chance. We have it all.

Before we start, players must have started six of the nine Premier League games this season…

Behind Alisson in terms of shot percentage so far this season are 2) Wolves’ Rui Patricio, 3) Arsenal’s Petr Cech and 4) West Ham’s Lukasz Fabianski. Bottom? That would be Leicester’s Kasper Schmeichel.

If we tell you that Aaron Wan-Bissaka has attempted 37 tackles this season and been dribbled past just twice, we think you will agree that there is literally no argument to even consider any other right-back. His record of 35 successful tackles this season is almost double the total of the next man. So while Kieran Trippier may create more chances than any other regular right-back (2.1 per 90), Wan-Bissaka streaks away on the combined total.

As Peter Goldstein wrote this week: ‘Errors or no, Wan-Bissaka is a heck of a player, who seems to get better every week.’

The Frenchman’s pass completion rate is actually fractionally lower than his teammate John Stones, but it is Laporte who is the ever-present this season. If we were to do a list of January signings who were now utterly excellent – and we probably will – then Laporte would be on that list. “It is difficult to find a better left central defender than him in the world,” says Pep Guardiola. That is quite some praise.

Away from City, the nod would be going to Chelsea’s Antonio Rudiger, another player who has quite quietly been brilliant.

Laporte-Rudiger two best CBs in the division so far this season.

The last time we put together this perfect XI, it was Cardiff’s Sol Bamba who got the nod, but he has been replaced as our no-nonsense defender by his English teammate Sean Morrison.

Of course, the player we would really want in this position – next to the silky Laporte – is the almost impassable Virgil van Dijk, but Liverpool have not quite come under enough pressure to boost the Dutchman’s numbers past those of James Tarkowski and the Cardiff Hoof Brothers. We didn’t claim this was science.

Taking this spot from Andrew Robertson is Everton’s Frenchman Lucas Digne, who matches Jose Holebas for chances created and Robertson for tackles per 90 minutes and finds himself streaks ahead of both, as well as a very, very tackley Arthur Masuaku.

Digne is fast becoming a bona fide Everton hero; on Sunday against Crystal Palace he clearly relished linking with Bernard on the left and touched the ball a frankly ridiculous 101 times.

I love Digne the more I watch him.

Nods are due to Pierre-Emile Højbjerg and Brighton’s Dale Stephens, but they can only dream of being glad to be Gueye.

All of the passes are done by Jorginho, who averages 103 per 90 minutes. He really does love a pass. That puts him some way clear of the 85.7 from Arsenal’s Granit Xhaka and 80.2 from his Chelsea teammate Mateo Kovacic. No player in the Premier League most represents their manager on the pitch. Sarri-ball is Jorgi-ball. And that’s a lot of ball.

At times it feels like Jorginho is to Sarri what De Niro was to Scorsese, they execute the vision of their director so perfectly that they become almost synonymous

Now that is a surprise. On key passes per 90, the top five are Willian, the maestro David Silva, Eden Hazard, Gylfi Sigurdsson and Jonjo Shelvey. It’s little wonder that Jose Mourinho was so keen to take Willian to Manchester United and Chelsea were so keen to retain him. He has created chances in all nine Premier League games he has played this season, with four coming against Manchester United on Saturday. Only two assists tells the story of Chelsea’s striker troubles.

With 1.9 shots on target and 2.3 successful dribbles per 90, Salah edges just ahead of Eden Hazard (1.4 and 2.6) and Raheem Sterling (1.5 and 2.3) in the battle to be the attacking midfielder who can give Premier League defenders kittens with their pace and dribbling ability. Salah – who is of course in terrible form – has so far scored four goals in nine Premier League games. It’s embarrassing really.

Thankfully there is a place for the Premier League’s best player this season…though only on a tie-breaker. Both Hazard and David Silva have a combined shots on target/key passes score of 4.9 per 90 minutes, with Silva creating more chances but Hazard being the bigger goal threat. In the end, it is only fair to judge on end product and Hazard has scored seven goals and created three more this season for Chelsea. He has been really rather good.

Eden Hazard tops the player form rankings with brother Thorgan moving up the standings after an impressive display against Mainz 05 — How many of these players do you have in your @FootballIndexUK portfolio?

Five goals from 13 shots. Which is seriously ridiculous. Against Manchester United and Southampton, he literally had one chance and he took it.

Elsewhere, Pierre-Emerick Aubameyang has been deadly. But his 33.33% conversion rate looks poor compared to Murray’s 38%. And it really isn’t.